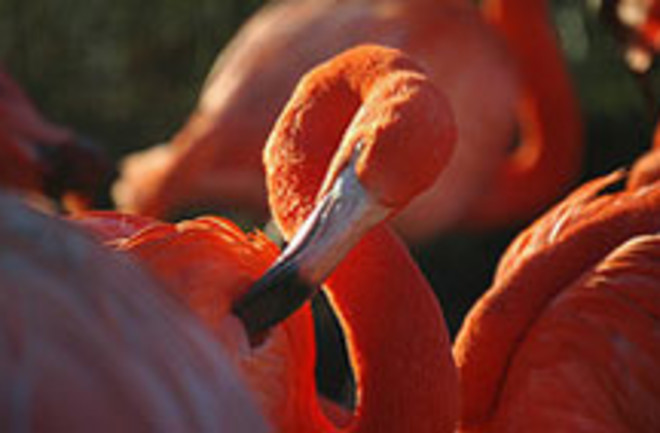 An extensive study of bird genetics has revealed so many surprises about avian evolution that researchers say textbooks and field guides will have to be rewritten. After comparing the genetic codes of 169 species researchers realized that many assumptions about bird evolution are wrong; for example, they found that falcons are not closely related to hawks and eagles, and that flamingos didn't evolve from other waterbirds.

"With this study, we learned two major things," said Sushma Reddy, lead author and a fellow at The Field Museum in Chicago, Illinois. "First, appearances can be deceiving. Birds that look or act similar are not necessarily related. Second, much of bird classification and conventional wisdom on the evolutionary relationships of birds is wrong" [AFP].

"Modern birds as we know them evolved really rapidly, probably within a few million years, into all of the forms we see. That happened 65 to 100 million years ago," Reddy said in a telephone interview. Reddy said these quick changes have made bird evolution hard to pin down [Reuters].

The study, which appears in the journal Science [subscription required], divides birds into three major groups: land birds, like the sparrow; water birds, like the diving penguin; and shore birds, like the seagull. But in a surprising result, the genetic analysis revealed that shorebirds evolved later,

which refutes the widely held view that shorebirds gave rise to all modern birds [Telegraph]. The study also suggests that distinctive lifestyles, like hunting from the air in the case of falcons and eagles, evolved several times during avian history. In another example, researchers say that flamingos didn't evolve from other wading birds, but instead from a land-based bird that adapted to coastal living.

The bird project was part of a larger, federally funded effort called Assembling the Tree of Life, which aims to trace the evolutionary origins of all living things, from marine bacteria to domesticated corn and Australian snakes [Chicago Tribune].