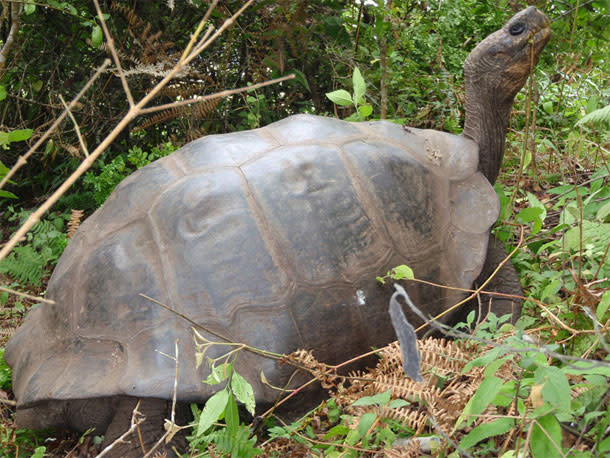 The giant tortoises of the Galapagos Islands are large, conspicuous and slow-moving. Encased in their shells, they might seem like impregnable tanks, but they have no defences against machetes. It’s no surprise that their numbers plummeted at the hands of humans who landed on the islands – first pirates, then whales and fur-traders, then permanent settlers. The lineage of giant tortoise from the island of Floreana was one of the first permanent casualties. It was extinct by 1835, just 15 years after a certain Charles Darwin visited the Galapagos. Or was it? A team of scientists has found traces of the tortoises, which suggests that a lost population might still be alive on nearby Isabela Island, the largest of the Galapagos archipelago. The team found neither droppings, nor grainy photos, nor footprints. They found genetic footprints. In 2008, Adalgisa Caccone found that some of the Isabela tortoises are genetically distinct from their neighbours. Surprisingly, their DNA turned out to be a partial match for the Floreana tortoises, whose genetic material had been recovered from museum specimens. Two years later, Caccone found nine captive tortoises at a captive breeding centre that also had Floreana DNA in them. The discovery suggested that the Floreana line hadn’t been snuffed out entirely. Pirates and traders often moved the tortoises from one island to another, so it’s entirely plausible that Floreana individuals could have ended up on Isabela. Perhaps they live there still, interbreeding with the locals to produce a hybrid population. If we found them, we could launch a breeding programme to restore their numbers. 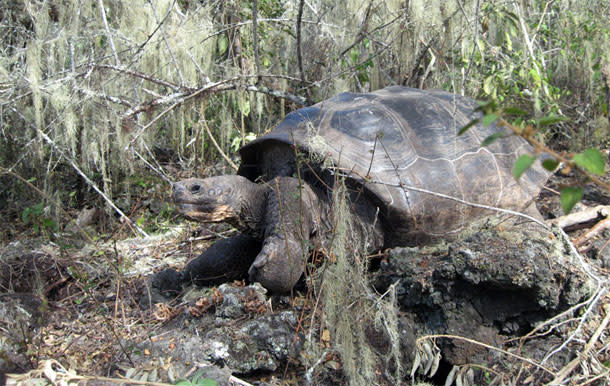 Now, Caccone’s team, led by Ryan Garrick and Edgar Benavides, has found more evidence that these lost tortoises are still around. They recently returned to Volcano Wolf, the peak in Isabela where they first discovered the hybrids, and took DNA samples from the locals. They worked hard, collecting samples from 1,669 individuals – a fifth of the estimated total. They found that 84 of these tortoises are first-generation hybrids. They must all have had a Floreana tortoise as a parent. Garrick and Benavides also found that 26 of these hybrids had Floreana mitochondrial DNA. This small set of accessory genes is only ever passed down from mother to child, so a third of the hybrids have an apparently extinct tortoise for a mother. Some of the other tortoises on Volcano Wolf also seem to have fainter traces of Floreana DNA in their genomes, suggesting that they are at least fourth-generation descendants. It seems likely that the Floreana immigrants have been mating with the native ones for the last 200 years, ever since they were first brought to Isabela aboard human ships. Garrick and Benavides estimate that it would have taken at least 38 pure-bred Floreanas to produce the level of genetic diversity seen in the modern hybrids. And there’s a very good chance that these parents are still alive. After all, giant tortoises can live for more than a century, and 30 of the hybrids were less than 15 years old. Extinct species are sometimes rediscovered, usually because someone finds the actual animal or plant. These resurrected creatures are known as Lazarus species. Likewise, scientists often use genetic studies to show that what people thought was one species is actually two or more – these are known as ‘cryptic species’. But this study marks the first time that scientists have re-discovered an apparently extinct animal by finding its genetic footprints in living descendants. It’s a cryptic Lazarus species! Caccone’s work suggests two possible ways of saving the Floreana tortoises. Either find the lost parents that apparently still live in Floreana, or use the captive hybrids to start a breeding programme. Either way, it’s worth noting that none of this would have been possible without the existence of museum specimens of the Floreana tortoises. The team will return to Volcano Wolf in December 2012 to try and find all the hybrids and, with luck, the pure ones. “Obviously, the more we stay up there, the higher the chances to find more animals but the area to search is huge and there are about 7,000 to look for,” says Caccone. This isn't just a vain academic exercise. The tortoises are keystone species in the Galapagos, and the biggest plant-eaters around. Their disappearance from certain islands has altered the balance of entire ecosystems. “We will lose what we treasure the Galapagos for,” says Caccone. “It’s a unique place where evolution has played its game of cards in complete isolation with a set of players that arrived by chance and that do not exist anywhere else in the world.” 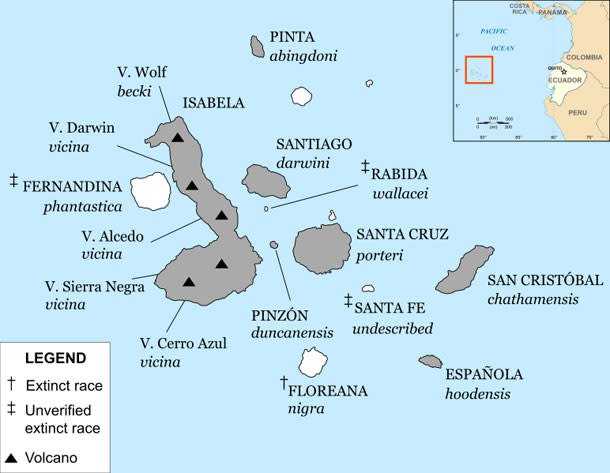 Reference: Garrick, Benavides, Russello, Gibbs, Poulakakis, Kajdacsi, Marquez, Bahan, Ciofi, Tapia & Caccone. 2011. Genetic rediscovery of an ‘extinct’ Galápagos giant tortoise species. Current Biology. Citation tbc. PS: The classification of the Galapagos tortoises is an ever-changing beast. There are at least 11 living groups (and four extinct ones). They are either all distinct species, or subspecies of the same one depending on whom you ask. They’re also either members of a distinct genus (Geochelone) or part of a wider one (Chelonoidis) that includes all South American tortoises. This new paper treats the tortoises as separate species of Chelonoidis. It’s all a bit academic and arcane. The key point is that they are the different lineages are genetically diverse, so it’s important that the Floreana ones might still exist. Images: Tortoise by Claudio Ciofi; Map by FallschirmjägerMore on the Galapagos:The pink Galapagos iguana that Darwin never sawMore on hybrids: