Millions of people in Latin America have been invade by a parasite - a trypanosome called Trypanosome cruzi. They are passed on through the bite of the blood-sucking assassin bug and they cause Chagas disease, a potentially fatal illness that affects the heart and digestive system. The infections are long-lasting; it can take decades for symptoms to show and a third of infected people eventually die from the disease. But T.cruzi does much more than invade our flesh and blood; it also infiltrates our genomes.

T.cruzi is unusual in that a massive proportion of its DNA, around 15-30%, lies outside of its main genome. These accessory sequences are stored in the form of thousands of interlinked DNA rings. In the parasite, these sequences are found in the mitochrondria - small structures that provide it with energy - but they have found a way to spread much further.

According to new research from Mariana Hecht and a team of Brazilian scientists, T.cruzi has the ability to inveigle its DNA rings into the genomes of those it infects. Once inside, the parasite genes can hop around, hitchhiking from one chromosome to another and leaving genetic chaos in their wake. They can even be passed on from one generation to the next. Hitching a ride aboard sperm and eggs, they can add themselves to the genomes of children, who've never been in direct contact with trypanosomes.

Hecht's discovery suggests that T.cruzi is an unexpected source of genetic diversity in our species. It's certainly not the only parasite to do this. Viruses have been infiltrating our genes since time immemorial and a massive part of our genome has a viral origin. These events, where viruses joined our family tree, provided raw material for natural selection. Some viral genes wreaked havoc by disrupting important genes, while others were eventually domesticated to act as helpful, even necessary, parts of our genome.

But T.cruzi is a different story. Despite its microscopic, single-celled nature, it's a vastly complex creature compared to a simple virus. And it continues to breach our DNA today. Now that we're getting technically better at detecting such "horizontal gene transfers", we may find that many other parasites are also smuggling their genes into ours. In Hecht's words, the "human population may be a patchwork of all the organisms to which it has ever been exposed." 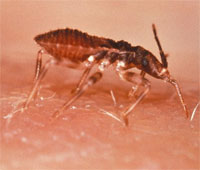 Hecht's discovery began with a simple observation - some rabbits and human patients would still die from chronic Chagas disease even after antibiotics had exterminated the last of the trypanosomes in their bodies. The hearts of these individuals were under attack from their own immune system - a common Chagas symptom. Hecht suggested that genetic fragments left behind by the parasites could be sustaining these chronic attacks, so she set out to find them.

Hecht analysed the genes of 87 people from five Brazilian families, whose oldest members all suffered from Chagas disease. These family heads, along with some of their descendants, still had antibodies that targeted T.cruzi, meaning that they still had active infections. Twenty-five of these people had trypanosome DNA in their genomes.

The trypanosome mostly inserts its DNA into parts of the human genome that are already mobile. They're especially fond of jumping into small sequences called LINEs that can copy and paste themselves into new parts of the genome. LINEs make up around a fifth of our genome so they're plentiful targets for the trypanosomes. During an infection, Hecht envisages the parasite flooding the nucleus of host cells with thousands of DNA rings that form hundreds of junctions with LINE sequences.

The parasite can also infect the "germ-line cells" that produce sperm and eggs, giving it a chance to transfer its genes into not just the current host, but all the host's children too. Indeed, among the three families that Hecht worked with, 29 sons and daughters had trypanosome DNA in their genes, despite never having been infected by the parasite themselves. Trypanosome genes can become unplanned heirlooms, passed down the generations and jumping into new places every time.

And the close association between these genetic parasites allows the trypanosome sequences to hop into new sites from their initial staging grounds. This invading DNA can have dire consequences depending on where it's inserted. In many cases, Hecht found that they fused disparate parts of different chromosomes, and one in eight insertions knocked out important genes, involved in everything from cell communication to the immune system to our sense of smell. 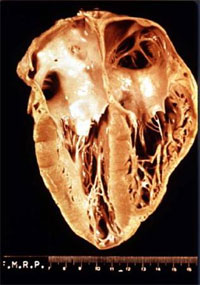 Hecht thinks that in some cases, the fusions of human and parasite genes could produce actual proteins. They may not do anything, but their presence could draw the attention of the immune system, leading to many of the autoimmune symptoms of Chagas disease. For now, this is just speculation. To truly understand how these jumping genes contribute to Chagas, we'll need to sequence the complete genomes of many patients and compare symptoms with sequences.

T.cruzi has the potential to be an important driver of genetic diversity. It infects millions of people from Latin America, about a million of whom are migrating to other continents. It also affects over 1,250 species of wild mammals.

This might just be the tip of the iceberg. Other complex parasites set up shop in the human body for long, persistent infections, including other species of trypanosome. We don't know whether these body-snatchers also donate their DNA to us but finding out should occupy Hecht and other scientists for years to come. What other genetic duets await discovery?