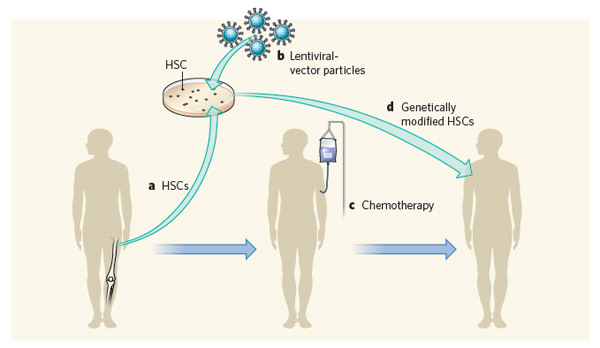 The patient known as P2 is just 18 years old, but he has been receiving monthly blood transfusions since the age of 3. P2 has a genetic disorder called beta-thalassaemia. Thanks to a double whammy of faulty genes, he can’t produce working versions of haemoglobin, the protein that allows red blood cells to carry oxygen around the body. Regular transfusions were the only things that kept him alive but for the last 21 months, he hasn’t needed them. An international team of scientists have managed to partially correct his genetic faults, granting him his independence. It’s a major victory for gene therapy, the act of editing faulty genes within living cells in order to treat diseases. The haemoglobin protein is a made of two slightly different molecules – alpha-globin and beta-globin – and people with beta-thalassaemia have faults with the latter. P2’s version of beta-thalassaemia is particularly common in southeast Asia. In his genome, neither copy of the beta-globin gene works at full capacity: one is either useless or produces an unstable protein; the other is completely broken. Around half of all people with these mutations depend on blood transfusions throughout their entire lives. The quality of that life is encumbered, and its length might be curtailed. The only cure is a transplant of blood stem cells from a close relative or preferably an identical twin. As you might imagine, that’s not always possible and even when it is, it’s a risky procedure with no guarantee of success. Marina Cavazzana-Calvo and Emmanuel Payen opted for a different approach; they tried to directly correct the faulty genes behind the disorder. Working with a large international team, they took some blood stem cells from P2’s bone marrow and infected them with a virus containing a working copy of the beta-globin gene. The gene was loaded into a modified lentivirus, a type of virus that can shove their DNA into the genome of the cells it infects. Lentiviruses include the notorious HIV, but those that are used in gene therapy are neutered; they can’t reproduce on their own and their only purpose is to act as a vehicle for shuttling genes into cells. As an added safety feature, the virus is designed to inactivate itself after it delivers its payload. Before receiving the new blood stem cells, P2 had a round of chemotherapy to rid his body of the existing faulty batch. It wasn’t easy, but it prepared his body for the corrected cells, which were loaded up over three years ago, on 7 June 2007. A year later, P2 went for his last blood transfusion. He hasn’t needed one for over two years. He’s still mildly anaemic, but he enjoys a good quality of life. This new success comes on the back of a lot of hard work. The technique was successfully tested in mice in 2000 and refined inlater years. Various groups have done the same thing with humancells. But Cavazzana-Calvo and Payen are the first to successfully transplant these corrected cells back into a patient. The modified cells make up just 1 in 9 of P2’s collection, and the fixed beta-globin molecules are just a third of this total. Neither is in the majority, but they’re enough to ensure that he has enough working copies of haemoglobin. This success comes with an important note of caution. One of the viruses had inserted its payload into a gene called HGMA2, making it around 10,000 times more active. HGMA2 controls the behaviour of blood stem cells and with such bolstered activity, the affected cells started making many extra copies of themselves. After 20 months, this set of clones accounted for around half of the modified cells. The problem is that this sounds rather like what happens in the early stages of leukaemia – a cell shakes of the shackles that control its replication and it starts making copies of itself with reckless abandon. Indeed, faulty versions of HGMA2 have been linked to human cancers. These risks will need to be monitored in the long term and further developments might help to avoid them altogether. Nonetheless, even these worries may be unfounded. While some HGMA2 mutations have been linked to malignant cancers, the particular fault in P2’s cells is mostly associated with benign tumours. In some people, who have a rare condition called Paroxysmal Noctural Hemoglobinuris, the entire supply of blood cells comes from ancestors with the same HMGA2 mutation, and one such carrier in Japan has been followed for over 17 years with no trace of cancer. It’s possible that the rise of this particular line of cells is a coincidence that has nothing to do with HGMA2. With most of P2’s own blood stem cells wiped out by chemotherapy, his new set was repopulated from the small supply of modified cells he was given. With such a small starter set, it’s not unlikely that a specific clone would rise to dominance. At the time of writing, Cavazzana-Calvo and Payen thought that this unleashed clone was responsible for most of the benefits that P2 experienced. But since then, Philippe LeBoulch, who headed the research group, says that its contribution has apparently fallen. LeBoulch says that he is “cautiously optimistic” and notes that “the transferred globin gene is innocuous and the control elements have been optimised to be as safe as possible”. Giuliana Ferrari, who has developed similar delivery viruses, agrees. In her work, she mapped where the lentivirus vehicles land when they infiltrate the genomes of host cells, and she found no preference for landing “in cancer-related or ‘dangerous’ genes”. She thinks that the trick for the future is to ensure that the patient receives a large enough “dose” of transplanted cells to reduce the odds of any one line dominating the others. Reference: Nature http://dx.doi.org/10.1038/nature09328More on gene therapy: Gene therapy gives full colour vision to colour-blind monkeysImage courtesy of Nature