People with red-green colour blindness find it difficult to tell red hues from green ones because of a fault in a single gene. Their inheritance robs them of one of the three types of colour-sensitive cone cells that give us colour vision. With modern technology, scientists might be able to insert a working copy of the gene into the eye of a colour-blind person, restoring full colour vision.

You might think that the brain and eye would need substantial rewiring to make use of the new hardware, but Katherine Mancuso from the University of Washington thinks otherwise. She has used gene therapy to give full colour vision to adult squirrel monkeys that had been red-green colour-blind since birth, opening up a world of formerly invisible reds and oranges, right in front of their eyes.

Her success proved that adding a third cone cell into a retina with just two isn't as much of a technical challenge as it initially seems - the new cells slot in with all the ease of plug-and-play hardware. The experiments suggest that early mammals could have evolved three-colour vision simply by developing a third type of cone cell, with little in the way of extra genetic control or neural wiring. If anything, the third cone probably exploited the circuitry that was already in place to process the signals from one of its siblings. 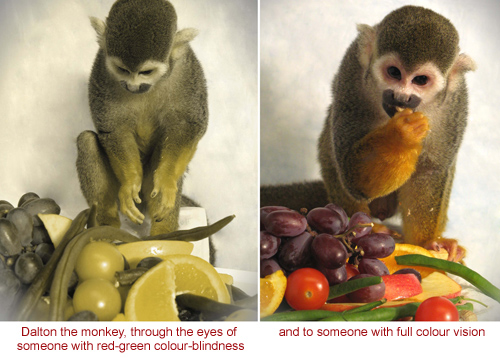 In squirrel monkeys, females see a more colourful world than males. While they have the same three opsins that humans do, males lack the gene for L-opsin and can't see red. Mancuso changed that by loading the human L-opsin gene into a virus and injecting it into the monkeys' retinas. As a result, around 15-30% of each animal's M-cones were also producing L-opsins. It's a trick that other researchers have used to give mice the ability to see red and it clearly worked for monkeys too.

The process took a lot of tweaking and failed attempts, but once Mancuso perfected its, the results were superb. She tested the monkeys with three collections of dots, two of which were grey and one of which was coloured. Their job was simple - touch the coloured set and earn a rewarding sip of juice. 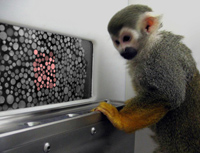 Female monkeys can see red, green, blue and yellow dots, but with only two types of cones, male monkeys can only make out blue and yellow ones. But after their viral injections, they too could pick out all four hues and they could even discern blue-green colours against red-violet backgrounds. Over the course of 5 months, a new palette of reds and oranges were open to them.

Their new abilities were still there after two years and Mancuso plans to continue watching the monkeys to see if they have any long-term side effects. For the same treatment to be used in humans, such long-term safety data will be essential, as will years of further research.

However, there's no denying that Mancuso's success is exciting and promising, particularly because many aspects of our sight are set during "critical periods" of development during childhood. If our brains don't experience a particular type of signal within these time windows, they don't develop the neural circuits needed to process them. As an example, David Hubel and Torsten Weisel's seminal experiments with kittens showed that stopping them from using one eye during early life prevented them from developing normal binocular vision later on.

But Mancuso's experiments show that this isn't true for colour vision, which means that gene therapy could potentially 'fix' red-green colour-blindness in adults, without being restricted to the very young. While some sight disorders will be impossible to 'solve', Mancuso predicts "that other [technologies], like gene therapy for red-green colour blindness, will provide vision where there was previously blindness."

As a sidenote, it irritates me that one of the press releases (and presumably numerous reports) say that the scientists "cured" colour-blindness in monkeys. They did no such thing. Male squirrel monkeys only have two types of cones naturally. It'd be like saying that we've cured a human of bipedality by grafting two extra legs onto them.