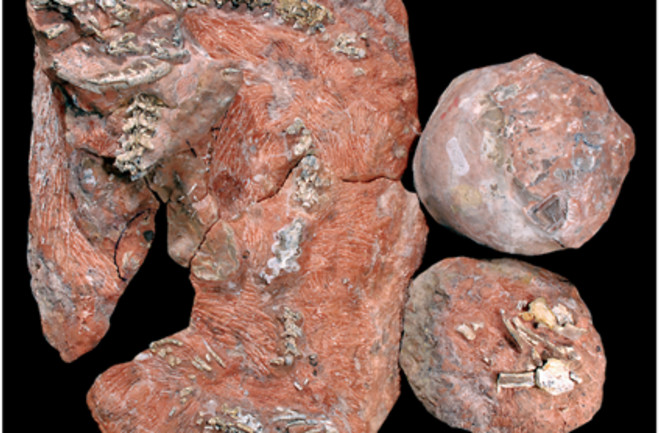 Take a good look: according to a new study in PLoS Biology, what you see in this image is a snake about to prey on dinosaur eggs, a 67-million-year-old scene frozen in time and finally discovered. It's the first time that a snake has been seen eating a dinosaur. The snake is that bit of bones on the left, lead researcher Jeff Wilson says. The egg in the top right contains a tiny titanosaur, one of largest dinosaur groups to ever walk the Earth.

"The snake (Sanajeh indicus) probably lived around the nesting ground and preyed upon hatchlings. They all died instantly when they were covered by a big pulse of sediment from a nearby hill loosened by a storm," says Wilson [New Scientist]

. Wilson guesses that a storm or some other malady might have led the enormous adult dinos to leave the nest, opening the door for the snake to slither in, wait for the baby dinos to hatch, and snack on them. But it never got the chance.

Unlike modern snakes, S. indicus lacked jaw joints that allowed it to open its mouth incredibly wide, so it relied on its large overall body size to prey on the fledgling dinosaurs [Wired.com]

. However, researchers say it's rare to find a snake specimen from the period, especially one as complete as the one here. Fully developed, the snake would've been nearly 12 feet long. And while the titanosaur would've reached immense size if it had grown to adulthood, the baby seen here is only 20 inches long—easy prey. If at first you have a hard time seeing a snake in the jumble of fossils, don't worry—the team did, too. Researchers found the fossil in India in 1984, but thought the area contained only dino bones. It wasn't until 2001 that Wilson took a second look at it, and the team finally figured out they were looking at snake remains and began to piece the puzzle together.

"It was such a thrill to discover such a portentous moment frozen in time," said Dr Dhananjay Mohabey from the Geological Survey of India, who unearthed the fossil [BBC News]