Frolicking With the Whales

A lucky encounter in Antarctica proves you don't have to kill minke whales to study them. 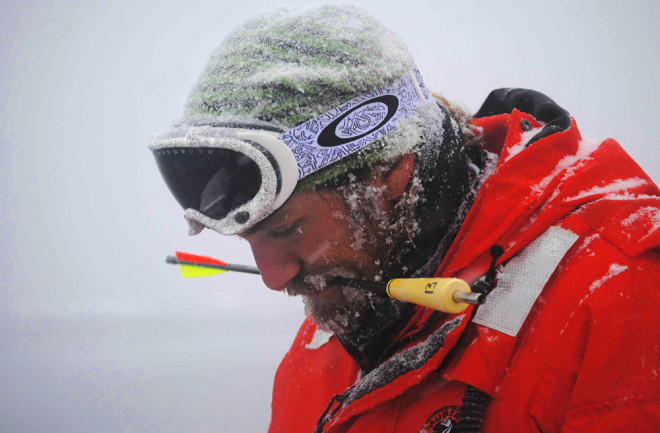 Ari Friedlaender was among the first to study a group of Antarctic minke whales up close, near enough to attach research tags. | Lindsey Peavy

They may not be white whales named Moby, but Antarctic minke whales can be just as elusive. Generally shy and abundant only around the inhospitable southern continent, the dark bronze beasts — among the smallest baleen whales at roughly 5 to 10 tons each — have been difficult to study in their environment, so biologists know little about their behavior. In fact, their elusive nature has been used by some as an excuse to hunt and kill the whales, saying it’s the only way to study them.

But last year, Ari Friedlaender, a marine mammal ecologist then at Duke University, discovered a new method. He was aboard a research vessel off the Antarctic Peninsula studying humpback whales when an unusual group of minkes let his team into their midst. Data from the following encounter was used as evidence when the International Court of Justice ordered a halt to Antarctic whale hunting this past March.

It was a nice overcast day, no wind, with grays and whites and dark colors all around. We saw a couple of minke blows 2 or 3 miles away and launched our small boat to go see.

Fun fact: Minke whales turned out to be the source of unusual “bio-duck” quacks heard underwater for decades.

Typically we see one or two minke whales at a time. But when we started to get close, all of a sudden they came up en masse, and there were about 40. We were shocked. None of us had ever seen a group that large. Amazingly, they were being very social, surfacing right next to each other and rolling almost on top of each other, behaving in a way none of us had ever seen.

Usually it’s very difficult to stay with minkes and keep track of them. But these animals were paying us no attention at all, and we realized that we were going to have the opportunity to deploy some data-gathering tags on them. On this trip, we had satellite-linked tags, which are implantable tags that transmit locations for a couple of months, and suction-cup tags, which deploy for 15 to 20 hours and collect behavioral data.

We kept up with the animals, and I got up in the bow of the boat. From up there, I could see down into the water. The animals just look like a rocket underwater. They’re amazingly streamlined. They’re absolutely beautiful. You can see these very distinct patterns on their backs and different swashes of colors that you just don’t see when they surface quickly.

I had one whale off the bow that I was concentrating on. It came up precisely where I wanted it, and the tag went on perfectly, high up on the back near the dorsal fin. This was the first time anybody had ever put a tag on a minke whale. We were so excited; we high-fived and hugged each other.

From about 8 to 10:30 in the morning, we deployed that suction-cup tag and then eight satellite tags, and we really did more in that two and a half hours to increase our understanding of minke whales than in the previous 30 years of research in the Antarctic. We are showing that we don’t need to kill the animal to understand it.