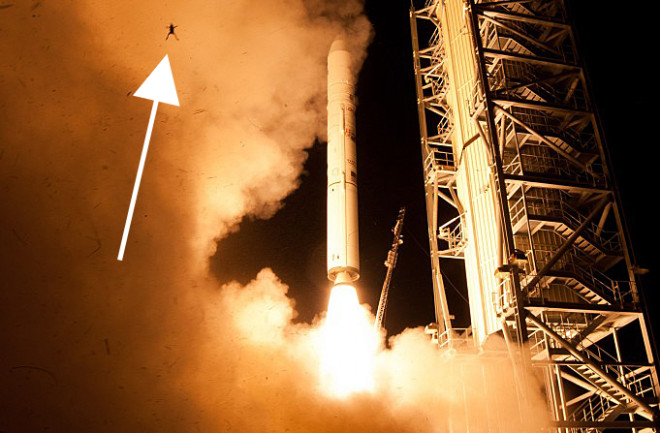 LADEE and the frog, at the Wallops Island Flight Facility in Virginia. Credit NASA/Wallops/Mid-Atlantic Regional Spaceport

This amazing photo taken on Friday at the launch of NASA's LADEE spacecraft contained a tiny photo-bomb---a frog that appears to have been launched by the force of the rocket.

The picture was taken by remote cameras on site and has since been confirmed by a spokesman to be authentic and non-altered, reported Universe Today

. The amphibian's presence might not be as bizarre as it first seems, though, since launch pads are often built in wet, marshy areas that can contain the heat produced from ignition, reports the Atlantic

. While it's unknown what became of the tiny traveler, it doesn't look hopeful---for scale, the rocket to his right is 80 feet tall. But he certainly went out with fanfare.