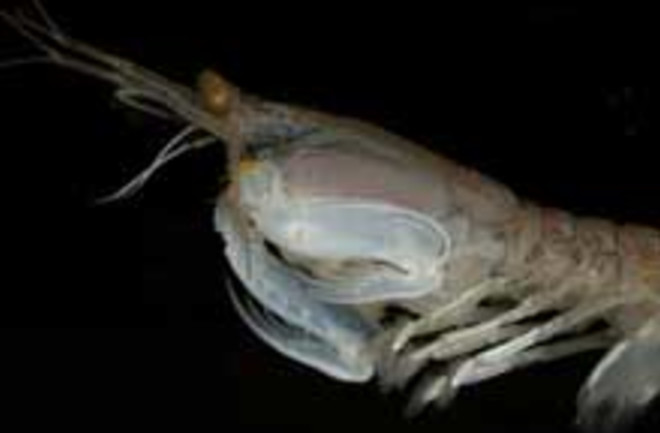 Who'd have thunk that a species of shrimp may be the world's most visually acute animal? Dr. Sonja Kleinlogel, a marine biologist at the Max Planck Institute, and Andrew White, a quantum physicist at the University of Queensland, have discovered that the mantis shrimp, which inhabits the waters around the Great Barrier Reef, can not only see ultraviolet and infrared light but also has optimal polarization vision, an ability so rare that not a single other animal has it. Since the 1950s, animals have been shown to use some linear polarization vision to see characteristics of light, which helps them accomplish what White has dubbed the "four fs: feeding, fighting, fleeing and … flirting.” But while most animals can tell how fast the electric field in a light wave is oscillating—thus allowing them to perceive color—a much smaller number can use polarization. And of that select group, only the mantis shrimp have eyes that can simultaneously measure four linear and two circular polarizations, allowing them to see both the direction of light oscillations and the polarization levels of light. White's Australian colleagues recently discovered that the males of a related shrimp species reflect circular polarization from their bodies to attract mates, leading to speculation that the mantis shrimp are using circular polarization vision to signal for sex—a theory that White calls the "prawnographic hypothesis." But he dismisses this explanation as the sole reason for the shrimp's unique abilities, since both male and female mantis shrimp have the same eye structure and polarization skills. Sight isn't the only unusual trait of these master shrimp, whose genus—Gonodactylus—means "genital-fingers," according to White. Its other talents include the ability to strike its hammer-like claw with enough force to break things like snail shells and aquarium glass. The speed of the blow, which can reach 50 miles per hour, makes it the second fastest self-propelled strike in the animal kingdom—the first being the bite of a species of flying ant.