For This Deep-Sea Animal, Oxygen-Free Is the Way to Be 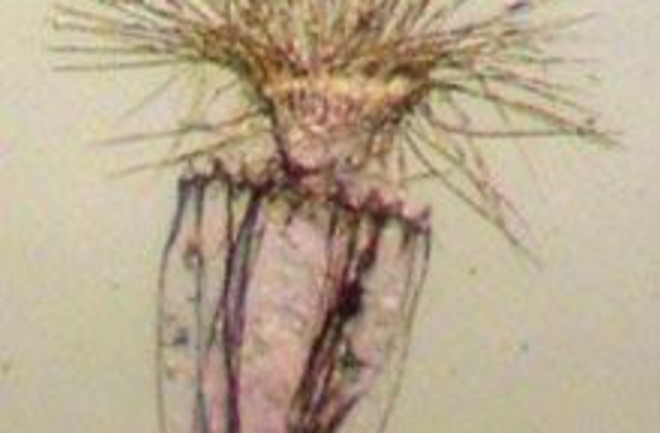 Microorganisms can live the far reaches of the planet, in extreme temperatures and pressures, and in some cases even without oxygen. But now scientists say they have found the first multicellular organisms inhabiting an anoxic environment. In other words: They've found the first animals living without oxygen. They belong to the group called loriciferans, a phylum of creatures that live in marine sediment. About a millimeter long, they look something like a half-jellyfish, half-crab.

The beasts live in conditions that would kill every other known animal. As well as lacking oxygen, the sediments are choked with salt and swamped with hydrogen sulphide gas [New Scientist]

. Roberto Danovaro and his colleagues, who documented this find in BMC Biology, had been searching the salty, oxygen-free depths of the Mediterranean Sea down below 10,000 feet for life. When previous searches turned up animal bodies, he says, researchers wrote them off, thinking they had fallen to those depths from oxygenated waters closer to the surface. But Danovaro says his team recovered living loriciferans from the area, including ones with eggs.

Unlike plants, all previously discovered animals, and fungi, the newly discovered animal species don't use mitochondria, the cellular organelle that converts sugar and oxygen into water, CO2 and, energy, to power their cells [Popular Science]

. Instead, the animals pack the hydrogenosome organelle, a feature common among the miccoorganisms that live in oxygen-free zones. Danovaro's find should lead other life-hunters to start seeking animal life in locations that had been labeled inhospitable to animals, like subduction zones, hydrothermal vents, and other places only simpler organisms had been discovered. And every time we push back the preconceived limits of life on our own planet, it excites those seeking life on others. Says oceanographer Lisa Levin:

"Are there metazoans on other planets with atmospheres different from our own?" Levin added. "Our ability to answer this question would be strengthened considerably by more intensive studies of animal-microbe interactions in extreme settings of our own inner space — the deep ocean" [LiveScience]

. Related Content: DISCOVER: Science Nation Video: Extremophile Hunter DISCOVER: Looking for Life in All the Wrong Places 80beats: Tiny Invertebrates Survive a Trip Through the Vacuum of Space 80beats: Where Would Martian Life Hang Out? Under a Giant Volcano, NaturallyImage: Roberto Danovaro