For Rhinos, Social Media Is a Heaping Dung Pile 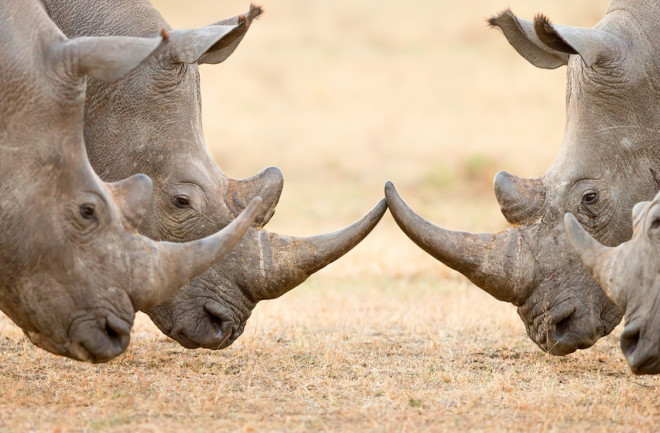 White rhinos in South Africa. (Credit: Shutterstock) To get the latest news and notes, white rhinos visit the local dung heap. Although it’s well known that mammals use scents in urine to convey information about fertility and demarcate territory, the way dung is used to communicate is less established. White rhinos defecate in communal mounds, called middens, and researchers believe these troves of waste serve as important information hubs about their community. And to test their hypothesis, an international team of scientists pulled a Facebook (circa 2014) and artificially manipulated their “newsfeeds” to see how, or if, the rhinos responded.

To pull off their experiment, researchers from the University of KwaZulu-Natal in South Africa and the Technische Universitat Darmstadt in Germany needed to get their hands dirty. They followed groups of white rhinos in South Africa’s Hluhluwe-iMofolozi Park and collected 150 fresh (less than 5 minutes old) dung samples, noting the creator's sex, fertility and territorial tendencies. Then, they baked those samples in a scientific oven— an analytical method called gas chromatography-mass spectrometry—to identify the volatile organic compounds (VOCs) emitted by the dung. VOCs are chemicals that easily evaporate into the air and are often odorous. In rhino poo, there are some 225 different VOCs. Researchers discovered rhinos' VOC signatures changed based on their sex and status, variations that likely stem from the complex relationship between hormones and the bacteria living in their guts. The chemical nonane, which has a “sharp” odor, signaled a male’s territorial dominance, for example, while 2,6-dimethylundecane indicated a female’s fertility. As a next step, researchers wanted to see if they could affect rhino behavior using these chemical signatures.

To alter the “news” in a midden, researchers tossed artificially created dung into the mix. They simulated rhino dung using a woven ball of grass, and soaking it in a solution that matched the chemical profile of either a territorial male, fertile female or a control. When researchers added a “territorial male” dung ball to a midden, the male who ran that chunk of turf visited the collection more frequently, and assumed a vigilant, ready-to-fight posture far quicker than under normal conditions. When they tossed a “fertile female” dung ball into a pile, males spent more time sniffing the artificial dung and visited the pile more often, as well. It was enough evidence for researchers to conclude that rhinos indeed use these piles as valuable sources of information, or a social network of sorts. Males leave "posts" by digging up the center of the midden (akin to blocking other males) and leave a fresh deposit, while females will drop their dung on the edges of the midden. They published their study Tuesday in Proceedings of the Royal Society B. The authors are calling this a first-of-its-kind analysis of communal defecators. It’s been assumed that coyotes, antelope, gazelles and other animals that use middens rely on them for information dissemination, but, to the authors’ knowledge, no one has taken the extra step of profiling dung VOCs and manipulating behavior using faux feces.