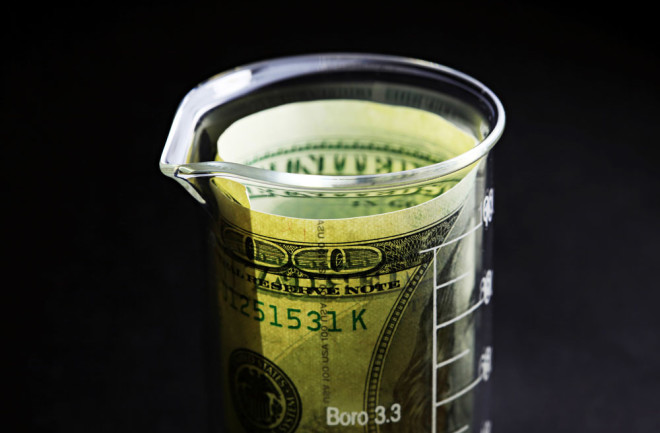 (Credit: isak55/Shutterstock) When Donna Riordan first moved to the idyllic Orcas Island just off the coast of Washington state, she had no plans of doing any sort of research, despite her background in science and education policy. But a few years later, in 2012, she learned that Pacific International Terminals, part of marine and rail cargo operating company SSA Marine, planned to build the largest coal transport terminal in North America. She’d be able to see it from her home. The proposed site was on top of two recently discovered fault lines. Riordan wanted to investigate the seismic hazards — which could influence how the terminal should be built, if at all. But there was one issue: how she could get the necessary money. Traditionally, researchers in the U.S. apply for grants through federal government agencies such as the National Institutes of Health or the National Science Foundation; states also award grants, though they’re typically smaller. And these government grants are competitive — there isn’t enough money for all the research projects out there. For Riordan’s mission, “there were no state resources,” she says. “There might have been federal resources, but it would have taken much longer to get that funding.” So instead, she turned to Experiment, a crowdfunding website similar to Kickstarter, but purposed specifically for scientists. Within two months, she raised $50,000 to collaborate with researchers on her queries. Since then, the team has found that earthquakes and tsunamis generated on the fault zone could impact nearby low-lying areas, and locations on mainland Washington and British Columbia. (This year, the company withdrew their proposal for the coal terminal.) Stories like Riordan’s are becoming more common, with sites like Experiment and the UK-based Crowd.Science open to all types of science. For instance, on Experiment, a biomedical engineer raised $1,135 (103 percent of his goal) for a prototype of an affordable, 3-D printed neural device that spurs spinal cord regeneration. Scientists working on another project to sequence a firefly’s genome raised $10,008 (just over 100 percent of their goal). And researchers on Crowd.Science have gathered more than £53,000 (215 percent of their goal) to investigate what someone’s brain looks like when they take LSD. Consano, another crowdfunding platform, is geared toward funneling money specifically into medical research projects ranging from cancer, mental health and global health. To date, they’ve launched 58 projects, with fully funded projects raising an average of $20,000. However, Natalie Jonk, the founder of Crowd.Science, believes crowdfunding is still in its infancy. “Platforms need to offer more support in the promotion of projects to potential funders and scientists need to get a firmer grasp on how to promote their work to a general audience and think more carefully about why people would want to support their project,” she says.

Researchers are also looking to philanthropic organizations for backing. Historically, these groups have been important drivers of work, namely in the astronomical sciences and physics, when funds are scarce. For instance, the Rockefeller Foundation supported the beginning of particle physics research, before the government became a strong player in funding after World War II. But financial support has been declining for physical sciences since the early 1990s, and for about the last decade for biomedical sciences. “When federal funding declines, then philanthropic funding becomes more important,” says Marc Kastner, the president of the Science Philanthropy Alliance, an organization that advises philanthropists to funnel their money toward basic science research. “And that’s what we’ve been seeing in the last few years.” Jay Scott, the co-executive director of Alex’s Lemonade Stand, a foundation for childhood cancer, has observed similar trends. “When the government make cuts to funding, we see many applications from people who hadn’t studied childhood cancer before, but they’re going to apply their science to it because there’s money available.” And in the future, corporations could help fund research in the sciences. Already, pharmaceutical companies are contracting out specific research projects to academic institutions or smaller companies. Jim Carrington, president of the Danforth Center — a nonprofit plant sciences facility located in Missouri — says this sort of funding is variable and relatively inconsistent. “Corporations won’t be funding broad, wide-open basic science,” he says. And, whenever research institutions take money from a company, there’s potential for conflicts of interest. Still, even though financing from these other avenues can pale in comparison to the billions available in federal grants, it’s important for scientists to not put all their eggs in one basket. “Institutions that are going to thrive in the future and maintain funding are the ones that can diversify their sources,” Carrington says. “They’ll effectively reach out to corporations, foundations, and philanthropic organizations in addition to federal agencies. They’ll be the institutions that operate more efficiently and creatively.”