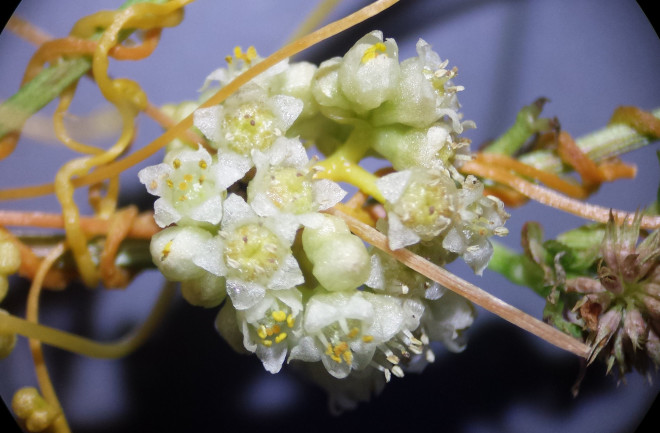 This parasitic plant turns off its hosts' genes to hide its theft. Photo Credit: Stefan.lefnaer/Wikimedia Commons Organisms' immune systems are constantly trying to detect and boot freeloaders. No living thing is particularly willing to give up its hard earned resources to just any moocher that comes along, so all parasites must find a way past their hosts' defenses and survive incessant attacks. Some constantly disguise themselves to move about undetected, while others mysteriously slip under the radar. Now, in a paper published this month in Nature, researchers have discovered one parasitic plant has evolved a remarkable way to survive: it creates small chunks of RNA to silence its hosts' genes. Dodders (Cuscuta spp.) are the bane of farmers around the world. Though they're technically plants, they pretty much lack that which is most essentially floral: the ability to photosynthesize. Because of this, they're obligate parasites, relying on other plants to get what they need. Using special structures called haustoria which penetrate their hosts' stems, these pests steal water and nutrients. They can sap so much that they quite literally suck the life out of their hosts. In North America, Cuscuta campestris (sometimes called the field dodder or golden dodder) is particularly fond of alfalfa. It's also found its way to other continents, like Australia, where it terrorizes native wetland plants, and Europe, where it costs legume farmers tens of millions annually. These thieving plants might be so successful because they've evolved a remarkable survival strategy: they produce microRNAs that turn off key genes in their hosts'.

Jim Westwood, co-author and professor at Virginia Tech examines dodder. Photo Credit: Virginia Tech MicroRNAs are one way that plants and animals control the expression of genes. These short RNA sequences—usually about 22 nucleotides long—bind to parts of messenger RNAs which are made during the first step of gene expression. When this happens, the double-stranded RNA that is created sets off a cellular mechanism which results that messenger RNA being chopped to bits—thereby stopping it from being translated into a protein. And then those little tiny RNAs go on to bind other messenger RNAs, effectively shutting down the gene. It's been known for a while that microRNAs can be used for ill because viruses are notorious for hijacking this system to effectively turn on or off genes. And scientists studying other parasites have found that host microRNAs play an important role in susceptibility and the immune response to infection. Which means that microRNAs may hold the keys to boosting the immunity to specific parasites. So it only made sense for scientists interested in finding possible resistance mechanisms against dodders to look at microRNAs in the parasites and their hosts. What was less expected, though, was finding that the parasites are able to produce microRNAs that target their hosts' genes rather than their own. To make this discovery, the researchers looked at what happens when dodders infect a kind of cress—Arabidopsis thaliana. They sequenced the microRNAs from the two plants alone and then when they were interacting. They discovered some of the microRNAs made by the parasite were able to make their way into the hosts' tissues. "Dodder seems to turn on the expression of these microRNAs when it comes into contact with the host plant," said James Westwood, professor at Virginia Tech and co-author of the paper, in a press release. When the team looked closer, they found that the presence of these microRNAs resulted in the chopping up of the host messenger RNAs, leading to less of them overall. And they even found evidence that the fragments were continuing gene silencing by acting as secondary small inhibitory RNAs (siRNAs).

How dodders silence their hosts genes. Figure Credit: Virginia Tech “Our results imply that this cross-species gene regulation may be more widespread in other plant-parasite interactions,” noted Michael Axtell, professor at Penn State and co-author of the paper. And whether it's specific to plants remains unclear—it's possible other parasites have evolved to take control of their hosts' genes in a similar way, as microRNAs are difficult to study, and few parasites have been studied this deeply. “What was really interesting is that the microRNAs specifically target host genes that are involved in the plant’s defense against the parasite,” said Westwood The team already knew that one of the genes affected—SEOR1—is involved in host susceptibility because mutations in this gene make plants less resistant to dodders. And it's a gene that's highly conserved in many of the dodders' hosts, so the researchers think that it may be one of the keys to protecting lucrative crops against their worst enemies. Find a way to prevent the parasite from knocking down its hosts' gene expression, and you might just keep them from being pests. “With this knowledge, the dream is that we could eventually use gene editing technology to edit the microRNA target sites in the host plants, preventing the microRNAs from binding and silencing these genes," said Axtell.