Six million years ago, Argentina was ruled by ‘terror birds’. These giant flightless hunters, standing one to three metres tall were at the top of the food chain and killed using a massive, hooked beak, up to two feet in length. The murderous beaks are certainly evocative, but they were no blunt instruments. They were precision weapons, used with finesse and wielded with speed and agility. Federico Degrange analysed the skull of a medium-sized terror bird called Andalgalornis and found that it was incredibly strong when biting straight down, but far weaker when being shaken from side to side. If the bird tried to subdue a struggling victim, its beak would probably have snapped under the strain. So despite its size, Andalgalornis probably danced around its prey, advancing and retreating while dispatching it with quick, well-aimed strikes – more Muhammad Ali than George Foreman. The terror birds (more formally known as the phorusrhacids) were some of the most powerful predators on the South American plains. They were so unlike any modern species that we can’t work out how they behaved by comparing them to living birds. Fortunately, their bones provide ample clues about their lifestyles. When it comes to studying the skulls of predators, there are few better people to turn to than Stephen Wroe. He specialises in using medical scanners to create virtual models of animal skulls, so that he can test how strong, tough or flexible they are. This technique is called “finite element analysis”. Engineers use it to put machines and vehicles through crash-tests but Wroe uses it to crash-test skulls. He has analysed the heads of some of the world’s most charismatic predators, including the sabre-toothed cat, the great white shark, the Megalodon, the Komodo dragon, and the human. It was only a matter of time before terror birds took their turn. With his virtual models, Wroe can simulate the forces that act on a virtual skull when it bites, shakes or pulls. The results show up as rainbow-coloured images, with white and red areas experiencing a lot of stress and blue areas where stresses are low. Wroe scanned the skull of Andalgalornis as well as its closest living relative, the seriema, and another hook-billed predator, the white-tailed eagle. The simulations showed that Andalgalornis could bite with almost three times as much force as either of the other two birds; this makes sense, for seriemas have small beaks and eagles mostly kill with their feet. The bite was relatively weaker than those of similarly sized meat-eating mammals. But the terror bird compensated with powerful neck muscles; pulling its head back created very little stress on the skull. This was a predator that was adapted for biting down hard and pulling back sharply, using the hooked tip of its beak to rip and dismember. But it wasn’t adapted for a protracted struggle. When Wroe simulated a side-to-side shake, the entire skull lit up with angry red and white patches. This “lateral shake” put the skull under dangerous levels of stress, twice as much as on a normal bite, and four times as much as on a pull-back action.

Degrange and Wroe also found that Andalgalornis’s skull was surprisingly inflexible. Most birds have joints in their skulls that make them fairly supple – both halves of the bill can flex slightly and the bill itself can move against the main skull. But in terror birds (or at least the medium-sized and large species), all of these joints had been replaced with thick bone so that the entire skull was very rigid. These results are a great example of how much information you can glean about an animal from something as simple as a piece of bone. We know that Andalgalornis’s skull had been adapted into a powerful, rigid weapon that was good at biting and pulling, but bad at shaking. It simply couldn’t have tolerated a lengthy struggle with its prey. That left the bird with two options. Either it could attack small prey that it could kill quickly, or it could take out larger quarry with precise, well-aimed strikes in a “repetitive attack-and-retreat strategy”. The powerful legs might also have helped to restrain thrashing victims. In this sense, the terror birds were rather similar to another group of predators that Wroe has studied – the sabre-toothed cats. They too had evocative weapons but like the beak of a terror bird, the massive canines of a sabre-toothed cat were too fragile to tackle large running prey. Instead, the cat probably used them like an assassin’s dagger. It used its tremendous upper body strength to wrestle large prey to the ground before delivering a quick and fatal bite. 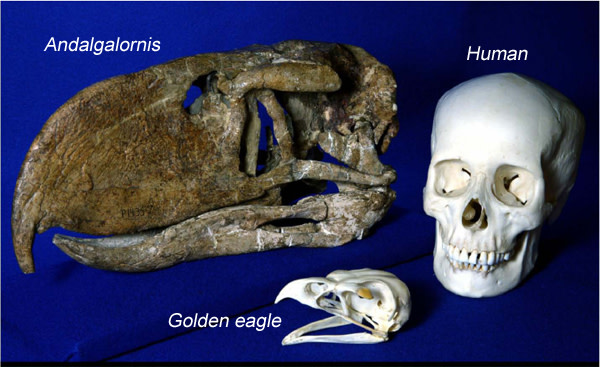