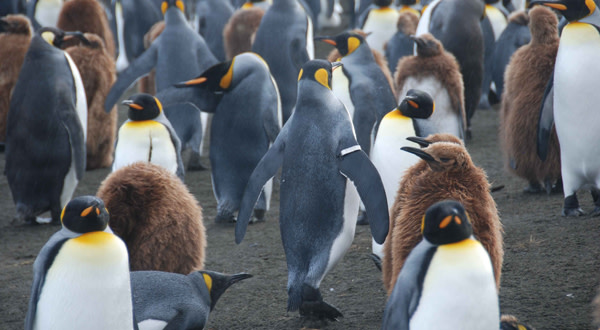 In the wild, you may occasionally see a penguin wearing a metal band around the base of one of its flippers. These bands aren’t the latest in penguin bling – they’re tools used by scientists to track the lives and movements of individuals. The bands are controversial – some say that they are innocuous, while others argue that they slow and hurt the very birds that scientist are trying to conserve. Now, Claire Saraux from the University of Strasbourg has evidence that might swing the debate – a ten-year study showing that banded birds die sooner and raise fewer chicks. Saraux’s study has serious implications for scientists who study penguins. The bands are popular because biologists only need a good pair of binoculars to see them from a distance. They don’t have to recapture the birds to identify them. Tens of thousands of penguins have been tagged in this way. Together, these banded birds are responsible for most of what we know about changing penguin populations. 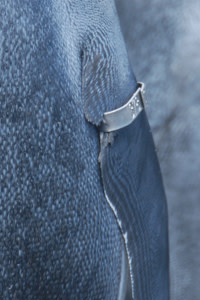 But they bands aren’t entirely innocuous. Penguins depend on their flippers to ‘fly underwater’ and beat them several times a second. The steel bands can come loose and rub or cut their skin. They also produce a fair bit of drag. In the 1970s, Sue Jackson at Stellenbosch University found that the bands can severely injure adelie penguins and slow them down. The birds needed more energy to swim and their chances of survival fell. Other studies concurred, but some suggested thatthese aretemporary setbacks. Over time, penguins would get used to their new accessories and be none the worse for them. Saraux doesn’t agree. In 1998, she tagged 100 king penguins at Possession Island in Namibia. She fitted half the birds with steel bands, and the other half with internal electronic tags. After 10 years of monitoring. Saraux found that just 20% of banded birds had survived the decade, compared to 36% of electronically tagged ones. These problems were most keenly felt in the first 4.5 years. During that time, banded birds were 30% more likely to die than their unbanded cousins. After that, the survivors had equal odds of making it through the rest of the decade. This initial die-off suggests that the bands are helping to finish off birds that are already in poor condition. But the survivors still suffer. Saraux found that banded birds arrived at their breeding grounds about two weeks later than their electronically tagged peers. Their delayed arrival coincides with the end of Antarctic summer, when food supplies are dwindling and rearing chicks is more difficult (and that’s for birds that aren’t slowed down by a metal band). As a result, the banded latecomers were less likely to breed successfully, or even to try to mate at all. Slowed by their bands, would-be parents had to make longer foraging trips to find enough food for their chicks. Overall, they reared 39% fewer young than the unhindered birds. The penguins weren’t adapting to their flipperwear as predicted. Even after 10 years of wearing them, they were still slower. The extra drag may not have killed them, but it did little for their chances of rearing the next generation. The bands also affect how the penguins cope with changing climates. In bad years, when food is generally scarce, all penguins turn up late at their breeding grounds and all of them fail to breed, banded or not. In good years, the plentiful supply of food swamps the disadvantage of wearing a band. Once again, the banded and unbanded penguins find themselves in similar positions. The handicapped nature of banded birds only comes to light in intermediate years, with enough food to sustain the most mobile individuals, but not everyone. This might explain the conflicting results from previous studies. You can compare banded and unbanded penguins from year to year, and get very different results depending on the environmental conditions. It takes a long experiment, like the one Saraux set up, to get a more accurate picture.

As top predators, penguins are very sensitive to changes elsewhere in the Southern Ocean’s food web, and their wellbeing reflects the many disruptions caused by climate change. They’re Antarctica’s equivalent of canaries in a coalmine. But the birds are handicapped by the very methods used to study them, this means that a lot of the data we have on the lives of penguins could be seriously biased.

But Dee Boersma, a penguin researcher from the University of Washington, doesn’t think that there is necessarily a widespread problem. In a previous study, she found that steel bands don’t affect the foraging trips of Magellanic penguins

(although aluminium and double steel bands did some harm

). “What they show is the bands they use harm king penguins. All bands are not equal and there is no reason to expect all penguins would be impacted in the same way,” she says. “King penguins weigh 15 times more than Magellanic penguins for a start. This could be a scale problem, in part.” Saraux counters that smaller penguins also tend to be more prolific breeders, so a slower swimming speed might not affect their ability to produce chicks. It might, however, affect the fate of the chicks, and that hasn’t been studied yet. Regardless, it’s clear that at least some penguins are harmed by some bans. As Saraux writes, “The effects of extensive banding schemes on penguin populations can on ethical grounds no longer be neglected.” Sue Jackson agrees. She praises the study and firmly calls for scientists to stop using flipper bands. “Penguin flipper banding is an outdated method that has no place in good, ethical science,” she says. Saraux, however, thinks that the bands might still have a place in short-term studies when the birds are mostly on land; they only seem to cause harm at sea. For longer studies, Saraux says that electronic tags are the better alternative. They weigh less than a gram, they don’t add any drag, and they didn’t harm the penguins in her study. They’ve even been used on tits to no ill effect, and those are far smaller birds. “Electronic tags probably have effects and one can’t hope to study and manipulate animals without any disturbance. However, we do believe that this disturbance is minimal,” says Saraux. The tags have limits, though. They’re implants so biologists can’t see them. They have to rely on antennas, fixed near the penguins’ nests and walkways, which detect the tags when the penguins pass by. That’s automatic, but the penguins effectively disappear if they move colonies. However, Saraux is working on ways of tracking the tags more actively. There is another option. Richard Sherley at Bristol University is working on recognition software

that can automatically recognise individual penguins from the unique natural markings on their fronts. An early test was very promising