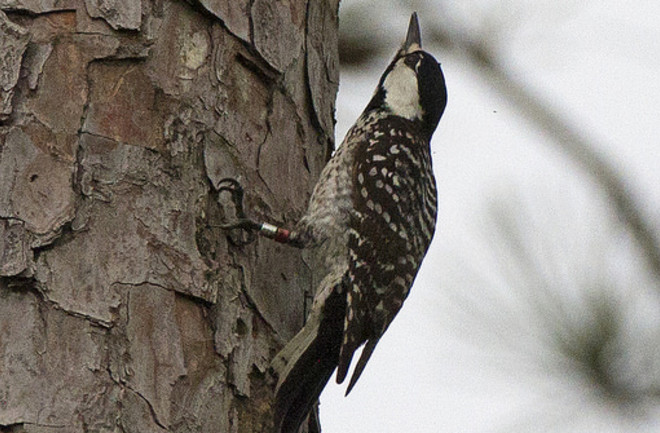 Image: Flickr/Lip KeeIt has been proposed that woodpeckers and fungi might work together in a symbiotic relationship, with birds spreading fungi to new environments, and the fungi helping to soften the wood to make hole-boring easier. Although attractive, there has never been direct evidence supporting this hypothesis... until now! In this study, scientists show that woodpeckers cary specific species of fungi that are also found in holes made by woodpeckers. They went on to track the fungi growing in man-made holes, and found that only holes visited by woodpeckers become colonized by those same species. So there you have it: woodpeckers spread fungus from hole to hole, presumably making the wood softer for the peckers. Ahem.Experimental evidence of a symbiosis between red-cockaded woodpeckers and fungi. "Primary cavity excavators, such as woodpeckers, are ecosystem engineers in many systems. Associations between cavity excavators and fungi have long been hypothesized to facilitate cavity excavation, but these relationships have not been experimentally verified. Fungi may help excavators by softening wood, while excavators may facilitate fungal dispersal. Here we demonstrate that excavators facilitate fungal dispersal and thus we report the first experimental evidence of a symbiosis between fungi and a cavity excavator, the red-cockaded woodpecker (RCW, Picoides borealis). Swab samples of birds showed that RCWs carry fungal communities similar to those found in their completed excavations. A 26-month field experiment using human-made aseptically drilled excavations in live trees, half of which were inaccessible to RCWs, demonstrated that RCWs directly alter fungal colonization and community composition. Experimental excavations that were accessible to RCWs contained fungal communities similar to natural RCW excavations, whereas inaccessible experimental excavations contained significantly different fungal communities. Our work demonstrates a complex symbiosis between cavity excavators and communities of fungi, with implications for forest ecology, wildlife management, and conservation." Related content: The wonders of koala poop revealed!A long time ago in a galaxy far, far away, Jar Jar Binks had a fungal infection.How mushrooms can control the weather.