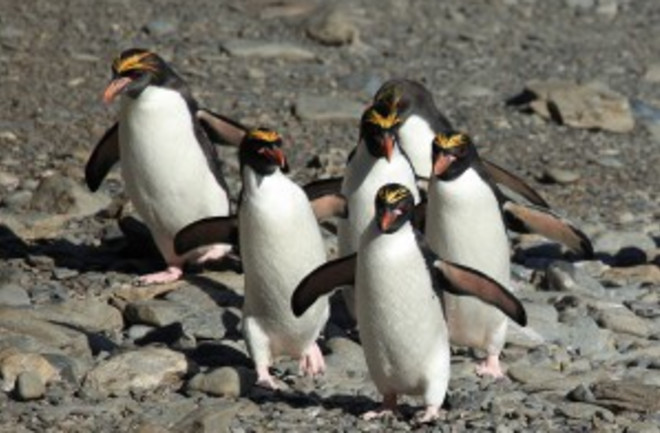 Photo: flickr/liamqWe all know penguins are cute, especially when they waddle around on land. So the idea of putting penguins on a treadmill, like they do in this study, sounds like an easy way to rack up YouTube hits (e.g., see video below). Well, apparently this cute activity also has a scientific purpose. In the study, the authors measured the metabolic rates of penguins on treadmills, comparing males, breeding females, and moulting females. Because metabolic rates are related to food consumption, the results of these measurements can be incorporated into models of the food chain in Antarctica. Hey, as long as it means more penguins on treadmills, I'm on board! Heart rate and rate of oxygen consumption of exercising macaroni penguins. "Twenty-four macaroni penguins (Eudyptes chrysolophus) from three groups, breeding males (N=9), breeding females (N=9) and moulting females (N=6), were exercised on a variable-speed treadmill. Heart rate (fH) and mass-specific rate of oxygen consumption (sVO2) were recorded from the animals, and both fh and sVO2 were found to increase linearly with increasing treadmill speed.A linear regression equation described the relationship between fh and sVO2 for each individual. There were no significant differences in these regressions between breeding and moulting females. There were significant differences in these relationships between all females and breeding males. fH and s VO2 were recorded from five of these animals for a total of 24 h. When fh was used to predict sVO2 for the 24 h period using the derived regressions, the estimate was not significantly different from the measured values, with an average error of -2.1 %. When fh was used to predict sVO2 for the 5 min intervals used for the calibration in all 24 birds, the estimate was not significantly different from the observed values, and the average error was only +0.47 %. Since the fH/sVO2 relationship was the same during periods of the annual cycle when the animals were inactive/fasting and active/foraging, it seems reasonable that, as long as sex differences are taken into account, fh can be used to predict the metabolic rates of free-ranging macaroni penguins all year round." Editor’s note: there were no videos in the paper, so here’s a random video of a penguin on a treadmill: [embed]https://www.youtube.com/watch?v=-RtHOvc64L0[/embed] Related content: NCBI ROFL: Phase 1: Build army of alligators that can run on land. Phase 2: Take over the world!NCBI ROFL: The physics of penguin huddling.NCBI ROFL: Penguins on treadmills. Need we say more?