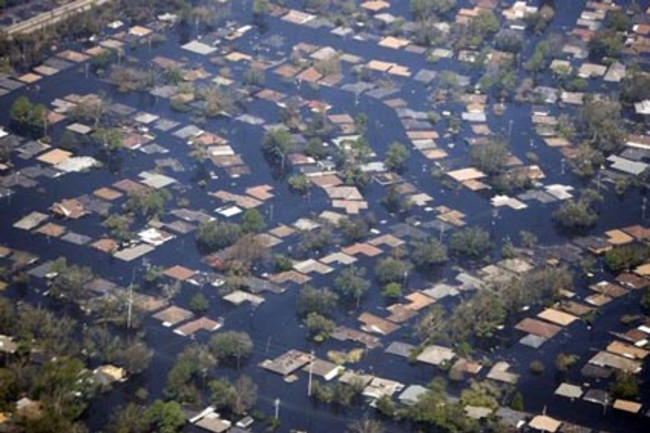 The city of New Orleans' defenses are certainly better than they were five years ago, when Hurricane Katrina breached the levees and flooded the city. With the five-year anniversary of that disaster upon us, however, the question that hangs in the air is: Would those refurbished barriers stand up to another Katrina, or something worse? Better Barricades In the last five years, the federal government has invested about $15 billion to revamp the New Orleans levee system.

This time, tougher foundation material like a mixture of construction clay and cement, is being used in the soil to hold structural sections of wall designed as an inverted T instead of their previous I-shape. The new design is considered stronger, allowing steel pillars to bracket each end into the ground. Total completion is expected in June 2011. [Christian Science Monitor]

The levee system stretches about 350 miles around the city, and its walls stand about 30 feet high (Katrina's storm surge rose to about 28 feet). Bigger Storms? Gregory Gunter of the U.S. Army Corps of Engineers trumpets the new systems as a defense against the so-called "100-year storm"—a tempest so bad it has only a 1 percent chance of striking in a given year.

The system shouldn't fail in a "400-year" Katrina-strength storm either, although Gunter says such a surge would probably flow over the barriers. This would lead to some flooding, but nothing like the scale of Katrina, which pushed over walls and breached levees. [New Scientist]

, the people who really know about keeping flood waters at bay—the Dutch—build their levees with a much larger investment, intending them to withstand a "10,000-year" event. In addition, because our hurricane records go back only so far, and because the past may not be an accurate picture of future storms, those year designations may be misleading anyway.

Paul Kemp, director of the National Audubon Society's Louisiana Coastal Initiative in Baton Rouge, and former storm surge modeller, says the new designs presume that future storms will resemble past ones. He points out that climate change may increase hurricane strength. [New Scientist]

of The Simpsons and This Is Spinal Tap fame, whose new Katrina documentary

is out now). The levees weren't the only problem, though: New Orleans' degraded wetlands put the city in added danger.

According to the Army Corps, all of the levees that failed during Katrina lacked wetland protection; the levees with a wetland buffer remained intact. Scientists have estimated that storm surge is diminished by one foot for every square-mile of wetland it travels through [National Geographic].

Now, groups like the Sierra Club are trying to revive the cypress ecosystem that once thrived in the shallow waters, and are doing so with a plan that actually requires pumping in partially treated sewage. With a high enough volume of biosolids—semi-treated sewage—they could add up to four feet of new material in which plants could take root.

The swamp has been killed primarily through saltwater intrusion from the various surrounding canals that connect the Mississippi River to the Gulf of Mexico. A pulse of freshwater sewage could make the site more suitable for wetland species. In return, those species would help filter and clean the effluent [National Geographic].

at Xavier University of Louisiana in New Orleans yesterday to mark the Katrina anniversary, praising the growth of small business and announcing that the federal government was finally ready to dole out its promised $2 billion investment in the city school system. But one thing still remains unsettled: Just how many people we lost, and who they are. The Houston Chronicle reports

that about 500 of the 1,500 people in Louisiana's recognized death toll remain unidentified. And that official count could be a lowball figure, some argue:

John Mutter, a Columbia University professor, has been gathering personal testimonials and public records of those killed in Katrina for an effort he calls Katrinalist. Mutter estimates the true death toll will top 3,500 if those killed by the storm and by its many after-effects are accurately tallied. And yet other counts put the toll at an estimated 1,800 [Houston Chronicle].

DISCOVER: The Next Katrina

The Intersection: New Orleans, Then And Now

Image: Office of the President of the United States