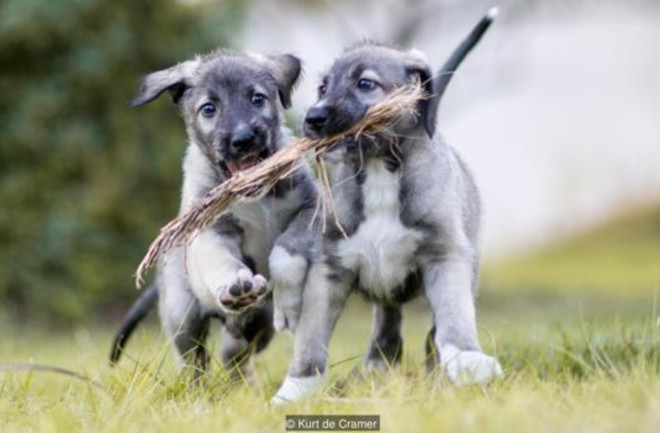 Cullen and Romulus playing outside. (Credit: Kurt de Cramer) Dogs are gifts that keep giving. And sometimes, they give us more than we bargain for. This time, thankfully, it's not a puddle of pee in the kitchen but an altogether more surprising, and adorable, discovery. The first confirmed pair of identical dog twins was born recently in South Africa. While there was anecdotal evidence to suggest it was possible, the phenomenon had never been substantiated. This time, though, there was a certified veterinarian on hand to witness the event, and DNA samples to back the claim up.

More Than He Bargained For

Veterinarian Kurt de Cramer was delivering a litter of puppies by Cesarean section when he noticed a peculiar bulge. Upon further inspection, his discovery turned out to be another placenta containing not one, but two connected to their Irish wolfhound mother by their own umbilical cord. He says the dual doggy delivery is the first time he has observed live identical twins in 26 years of practice. Dogs naturally give birth to multiple puppies at the same — the average is five or six. But monozygotic twins, siblings from the same egg, had never before been observed. It was thought that the extra puppy was too much for one placenta to handle, and the embryos would die from a lack of food and oxygen, as had been seen before. The twins, named Cullen and Romulus, are living proof that identical dog twins can survive. They were a little smaller than their litter mates at birth, but are doing just fine now, the BBC reports.

May Not Be Rare

Dog twins may be more common than we think though. De Cramer only noticed this pair because he happened to be performing a C-section on their mother. Had they been born naturally, it would likely have gone unnoticed. De Cramer and two researchers from the University of Pretoria confirmed their find with a series of DNA tests comparing the twins to each other and two their siblings, which shows that they were genetically identical to each other and different from the rest of the litter. They do possess small deviations in the markings on their coats, but those are likely due to differences in how their genes are expressed, not the genes themselves. Researchers published their findings in the journal Reproduction in Domestic Animals.

(Credit: Kurt de Cramer) We can now add dogs to the very short list of animals known to give birth to identical twins — humans and nine-banded armadillos are currently the only other species known to do so. But, as we saw with dogs, there may be many more adorable surprises waiting for us out there.