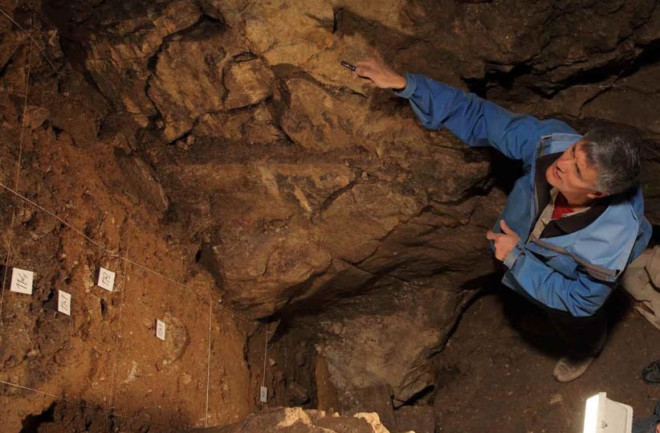 A chunk of a Denisovan skull has been identified for the first time — a dramatic contribution to the handful of known samples from one of the most obscure branches of the hominin family tree. Paleoanthropologist Bence Viola from the University of Toronto will discuss the as-yet-unpublished discovery at the upcoming meeting of the American Association of Physical Anthropologists in Cleveland, Ohio, at the end of March.

Very little is known about the Denisovans, an extinct branch of hominins that was a sister group to Neanderthals. Only four individual Denisovans had been identified previously, all from one cave in Siberia. The first Denisovan was described in 2010 from the fragment of a pinky finger bone, and three more were identified from teeth. This skull piece, excavated about three years ago in that same Siberian cave, represents a fifth individual.

“It’s very nice that we finally have fragments like this,” says Viola. “It’s not a full skull, but it’s a piece of a skull. It gives us more. Compared to the finger and the teeth, it’s nice to have.” But, he adds, it’s hardly a full skeleton. “We’re always greedy,” he laughs. “We want more.”

The new discovery consists of two connecting fragments from the back, left-hand side of the parietal bone, which forms the sides and roof of the skull. Together, they measure about 8 cm by 5 cm. DNA analysis proves that the piece is Denisovan, though it’s too old to date with radiocarbon techniques. Viola and colleagues have compared the fragments to the remains of modern humans and Neanderthals, according to the conference abstract, although Viola is unwilling to discuss the details of what they learned until the work is published.

“This is exciting,” says Chris Stringer, a paleoanthropologist at the Natural History Museum in London, U.K., who wasn’t involved with the work but will be presenting in the same upcoming conference session about Denisovans. “But, of course, it is only a small fragment. It’s as important in raising hopes that yet more complete material will be recovered.”

Sadly, the newfound piece is not large enough to use to identify other skulls found elsewhere as Denisovan without genetic information to back the diagnosis up. Researchers are still waiting for a find like that, which would likely help to boost their collection and understanding of Denisovans. Researchers think the extinct hominins once roamed widely across Asia, but since most fossils aren’t well enough preserved to allow for genetic analysis, it has been hard to identify Denisovans elsewhere.

In 2017, some researchers wondered whether two partial skulls found in China might be Denisovan, but this remains unconfirmed. “It should be possible to see how well this [new find] matches with Chinese fossils such as those from Xuchang, which people like me have speculated might be Denisovans,” says Stringer.