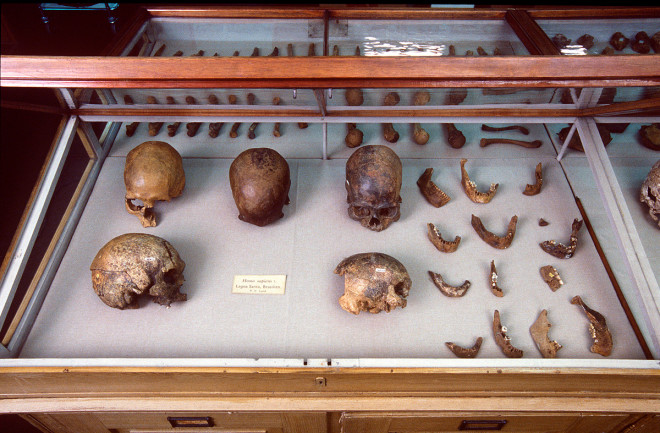 A new report finds people spread through the Americas in multiple independent, relatively quick migrations. The discovery contrasts the notion that the peopling of the continents took the form of a slow expansion from the northern regions of modern day Alaska into South America as populations grew.

“The findings imply that the first peoples were highly skilled at moving rapidly across an utterly unfamiliar and empty landscape,” David Meltzer, an anthropologist at Southern Methodist University in Dallas, Texas, who co-led the new work, said in a statement. “They had a whole continent to themselves and they were traveling great distances at breath-taking speed.”

The work also confirms that Native Americans were descendants of these First Americans, a point that some researchers had contested.

A related paper details how early Americans spread into South America, and shows that it happened on more than one occasion. You can find our coverage of that paper here.

Previous studies indicate the first peoples arrived to the Americas around 25,000 years ago when populations from Siberia and East Asia crossed a land bridge now covered by the waters of the Bering Strait from present day Russia into Alaska. These first Native Americans later split from each other. One lineage likely stuck around in northern Alaska and became a genetically isolated group known as Ancient Beringians. Others moved south and branched into Northern and Southern Native American populations 17,000 to 14,000 years ago. These later groups eventually gave rise to all living Native Americans.

One the burial context sampled at Jiskairumoko. The image shows one of the individuals encountered during excavation. The human remains have been removed in this image. (Credit: Mark Aldenderfer)

One the burial context sampled at Jiskairumoko. The image shows one of the individuals encountered during excavation. The human remains have been removed in this image. (Credit: Mark Aldenderfer)

But researchers understand less about how people moved through the Americas after the initial settlements around 10,000 years ago. Part of the difficulty is that genome sequences from the time period are rare.

In the new study, Eske Willerslev, a geneticist at the University of Copenhagen and the University of Cambridge, who co-led the research with Meltzer, worked with the Fallon Paiute-Shoshone Tribe, a group of Native Americans in Nevada, to increase the number of samples for analysis. All together, the researchers analyzed genome sequences from 15 ancient human remains from across the Americas. A few sequences came from humans who once lived in modern day Alaska and British Columbia. Several others are from individuals from the Spirit and Lovelock Caves of Nevada. Still others came from sites in Brazil, Patagonia Chile and Argentina. The remains date from about 10,000 years ago to as recent as 600 years ago.

The team’s analysis shows that once Native Americans had moved south of eastern Beringia, they radiated rapidly to different parts of the continents in a manner the researchers describe as “leap-frogging” across the landscape. Southern Native Americans split from Northern groups 14,000 to 6,000 years ago and moved rapidly from North into South America for example. Some of these native South Americans migrated east of the Andes Mountains, whereas others moved west.

Furthermore, some geographic expansions happened more than once, the team reports today in the journal Science. Around 8,000 years ago, people from Mesoamerica migrated north into the Great Basin, spanning Oregon, Utah and Nevada, which later resulted in a population turnover near the Lovelock Caves of Nevada. They also went south, where they intermixed with descendants of the earlier migration. This southern expansion contributed to the ancestry of most South American groups, the researchers conclude.