Fertility rates climb back up in the most developed countries

You wouldn't think it to look at our skyrocketing global population, but many parts of the world are experiencing serious falls in fertility. A country's fertility rate is the average number of children born to a woman over her lifetime. In most developed countries, it needs to be 2.1 or higher if the number of newborns is to compensate for citizens who die. In developing countries, where death is a more frequent visitor, this replacement threshold is even higher.

The problem is that declining fertility is intimately linked with a country's economic and social development. As a result, more than half of the world lives in areas where fertility rates have fallen below this crucial threshold. It's the same situation in the UK, Australia, Japan, China, Brazil, Russia, Canada and more. Some believe that these processes are irreversible, with increasing prosperity inevitably leading to diminished emphasis on childbirth.

But Mikko Myrskyla from the University of Pennsylvania thinks differently. He has found that the most developed countries have actually reversed their falling fertility rates, possibly by improving gender equality and making it easier for women to raise families while enjoying successful careers. The result is a graph that looks like a reverse tick, with a small upturn in fertility rate that only becomes evident when looking at data from the dawn of the 21^st century. At the most advanced stages of development, it seems that babies make a comeback. 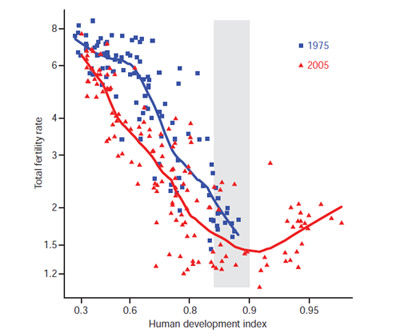 Now for those of you jubilantly punching the air at the prospect of fewer people, a bustle-free life and a less taxed environment, it's worth considering why fewer births is a problem in the short term. Falling fertility rates mean ageing populations. That means that the country will be served a shrinking workforce, while having to pay greater healthcare costs due to rising levels of chronic disease and disability.

If fertility rates fall too low, as is the case in Russia and Japan, the population will actually start to shrink, again with important social and economic consequences. Immigration can help to offset that loss, but as countries like the US and the UK demonstrate, immigration brings social strife of its own.

So in the long term, fewer people might be a good thing, but in the immediate future, it means big challenges. In that context, Myrskyla's data provide a silver lining in an otherwise gloomy picture. He compared the fertility rates of 107 countries in 1975 with their scores on the Human Development Index - a measure of the level of development that takes into account life expectancy, literacy, education and standards of living. He did the same for 140 countries in 2005.

In both years, Myrskyla found that the greater a country's HDI score, the lower its fertility rates, but only up to a point. At scores of 0.9 or over (and the range goes from 0 to 1), the trend reverses so that women from the most developed countries have , on average, more babies. This trend only became obvious by looking at the more recent set of data for in 1975, no country had reached the stage of development where fertility rates pick up again. Then, the top score was 0.887, while Australia is currently in the lead with 0.966.

The upturn is small but significant. If a country's HDI score is between 0.9 and 0.92 (as is the case for South Korea or Germany), the average fertility rate is low enough at 1.24 for the population to halve in size every 40-45 years. However, countries with the highest scores (including Australia and Scandinavia) have an average fertility rate of 1.89 - not quite the replacement level, but close enough that small levels of migration can sustain the same population.

Myrskyla saw the same trend when he focused on individual countries over the last 30 years. There were a few exceptions but in general, as countries became more developed, babies came back into fashion. In the US, falling fertility reversed in 1976 at an HDI score of 0.881. In Norway, it happened in 1983, at a score of 0.892. Myrskyla reckons that the critical point is around 0.86 - beyond this stage of development, an extra 0.25 points on the HDI score translates to roughly one extra baby for every woman.

The big question, of course, is what's behind the reversal? It certainly seems to apply to a diverse set of cultures and the exceptions (including Japan, Canada and South Korea) are hardly that similar. Myrskyla thinks that high HDI scores reflect societal changes that make it easier for women to choose to have children. As equality becomes more strongly felt, women get a better education, earn more jobs and command higher salaries. That makes it easier for them to cope with the financial drain of children, and for them to successfully take time out of the rat race and re-enter later on.

It's possible that rich east Asian countries like Japan and South Korea have failed to buck the fertility trend because they have failed to address the challenges of gender equality and work-family balance that other countries have begun to tackle. Still, that doesn't explain Canada. In a related editorial, Shripad Tuljapurkar suggests that the HDI itself may be to blame. It doesn't tell us anything about whether development affects men and women equally, and in that respect, the Gender Development Index (GDI) maybe a more useful measure.

All in all, Myrskyla's results paint a slightly rosier outlook for much of the world. As he writes, "As long as the most developed countries focus on increasing the well-being of their citizens, and adequate institutions are in place, the analyses in this paper suggest that increases in development are likely to reverse fertility declines--even if we cannot expect fertility to rise again above replacement levels." However, many countries that are already facing falling fertility rates have a while to go before they cross the 0.86 threshold. In some of these places, keeping fertility rates below the replacement threshold may actually be in their best interests.