For some endangered birds, captive breeding programmes are the only way to boost fading wild populations. But such programmes have a problem – they often rely on artificial insemination, which gets much poorer results than expected. Adeline Loyau and Frederic Lacroix from Morocco’s Emirates Center for Wildlife Propagation (ECWP) have found a way to help, by priming the females with pictures of sexy males strutting their stuff. The duo worked with the Houbara bustard, a large bird that has been hunted extensively because its meat is prized as an aphrodisiac. It’s classified as a vulnerable species and the ECWP has set up a captive breeding programme to restore its numbers. Females are kept apart from the males and many never actually see one before being artificially fertilised. This is the only method that successfully breeds these birds in captivity, but it’s also associated with a 15% fall in hatching success. Loyau and Lacroix thought that the females themselves might be responsible for this deficit. In the past, many researchers have shown that female birds can control the amount of energy they invest in the next generation. The female makes her decision after weighing up many factors such as the quality of her mate and the conditions of her environment. If she thinks she’s onto a genetic winner, and her chicks will be born into a world of riches, she would do well to give them a head-start. If her mate is a dud and food is scarce, it might be best to conserve energy and try again next season. Clearly, these decisions can dramatically affect the chicks’ chances of hatching and surviving. To manipulate their decisions, Loyau and Lacroix placed the females in spectator aviaries that gave them a bird’s eye view of a displaying male. When a male Houbara bustard wants to woo a female, he runs around while erecting the feathers on his head and neck. It’s an honest sign of his quality, for weaker males simply can’t keep up the vigorous showmanship for long. 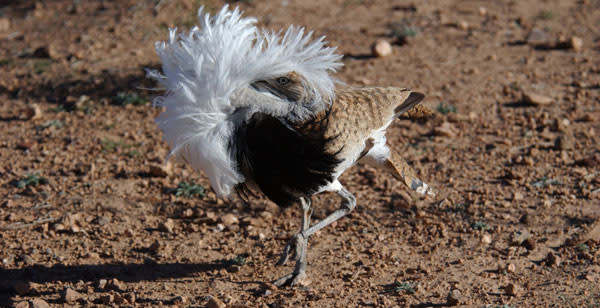 Loyau and Lacroix found that when females saw males that displayed more frequently, they were more likely to be successfully artificially fertilised and their eggs were more likely to hatch even though they laid the same number. When the females saw the seductive dance of a Casanova bustard, they added more testosterone into the yolk of their eggs, to the same extent that they would do in the wild. The dance of a dud male triggered no such investment. This hormonal trust fund gave the chicks a headstart in life. They produced more testosterone themselves, and they grew faster as a result. By studying the birds that provided the sperm samples, Loyau and Lacroix found that the actual quality of the chicks’ fathers had no bearing on their odds of hatching or their growth rate. Those were purely down to mum’s influence, and she was in turn influenced by the quality of the male whose courtship she witnessed. In the wild, he would probably have been the one she eventually mated with but captivity allowed the researchers to tease apart her influence from that of her chicks’ biological father. Loyau and Lacroix’s study has important implications for captive breeding programmes. These rely heavily on artificial insemination so that females can be mated with males who are specially selected to boost the genetic diversity of the next generation. This work shows that there’s more to doing this well than simply mixing sperm and eggs in a tube. Female animals often have a big say on the fate of their young and conservationists are need to understand their preferences and work with them in order to get the most out of their breeding programmes. It’s possible that different versions of the same trick would work on other species. In Houbara bustards, courtship is a visual affair, but other birds woo each other with calls and songs – perhaps for them, a recording of a virtuoso singer would have the same effect on their breeding success. Reference: Proc Roy Soc B http://dx.doi.org/10.1098/rspb.2010.0473Images from ECWP websiteMore on animal sex lives: