Featured Creature: Worms That Stab Their Own Heads to Reproduce 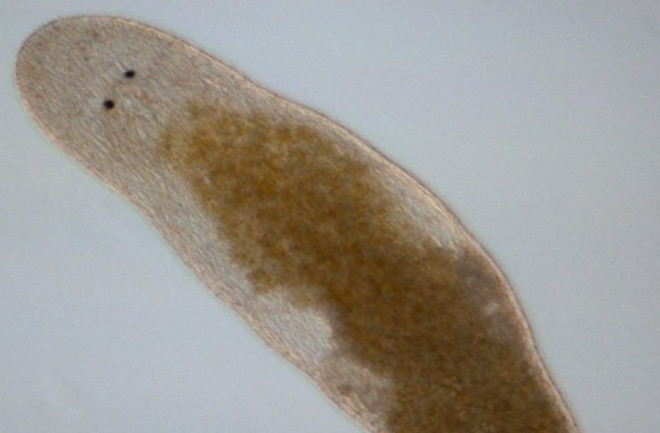 (Credit: Steve Ramm's research group at Bielefeld University in Germany) One is the loneliest number that you’ll ever do, unless, of course, you’re a hermaphroditic worm. The free-living flatworm Macrostomum hystrix prefers to mate with others of its species; but if placed in isolation, the independent worm will do the nasty on its own for the sake of reproduction. Unfortunately, there’s still a price to pay for being a loner: In order to self-inseminate, worms have to inject sperm into their own heads. It’s a gruesome reproductive technique that scientists call “cephalo-traumatic secretion transfer via a hypodermic penile appendage.” How romantic.

Hypodermic insemination, also known as traumatic insemination, isn’t the friendliest reproductive tactic, but it certainly benefits the creature that’s passing on its seed. By sticking a needle-like “penis” directly into the body of a recipient, the donor can exert some control over the ultimate destiny of its sperm. That’s because direct injection allows sperm to bypass prohibitive checkpoints in a recipient’s reproductive tract, ensuring they'll hit their mark. Although it has male and female parts, M. hystrix prefers to inject its seed into partner, rather than itself. But, as scientists recently discovered, they have no qualms about inseminating themselves if there’s no one around. A relatively simple experiment helped them arrive at their conclusion.

Scientists started by distributing 1,000 worms into 10 petri dishes of 100 worms. The worms were then allowed to mate, and those babies were the subjects of the experiment. Some of the hatchlings were gathered and placed into test wells where they were isolated. Other hatchlings were placed into test wells in groups of three. Here’s what makes flatworms ideal for a study like this: They have transparent bodies, and under a microscope scientists can see where, and how many, sperm have been injected into each worm’s body. A single researcher — with a lot of patience — went through the three- and one-worm wells to count the number and location of sperm in each worm’s body. When M. hystrix worms mate with other worms, they tend to inject sperm into the tail and midsection of their mate. This was true for worms housed in three-worm wells. However, researchers noticed that sperm was concentrated in the head region of isolated worms. Researchers concluded that isolated worms must have inseminated themselves by sticking their “hypodermic penile appendage” into their heads. The decision to poke their heads wasn’t by choice: It was the only target their tails could physically reach on their own bodies. Researchers published their findings recently in Proceedings of the Royal Society Biological Sciences.

The Power of One

To double-check their findings, researchers took worms from triplet wells and isolated them. Sure enough, these worms, too, stabbed their heads out of loneliness. Scientists aren’t really sure if there’s a biological price to pay for self-inflicted reproductive head wounds, or if M. hystrix is none the worse after performing the deed. However, it serves as a novel example of reproductive problem-solving. But ultimately, if it takes a hypodermic penile shot to the head to make some offspring, two doesn't really sound as bad as one.