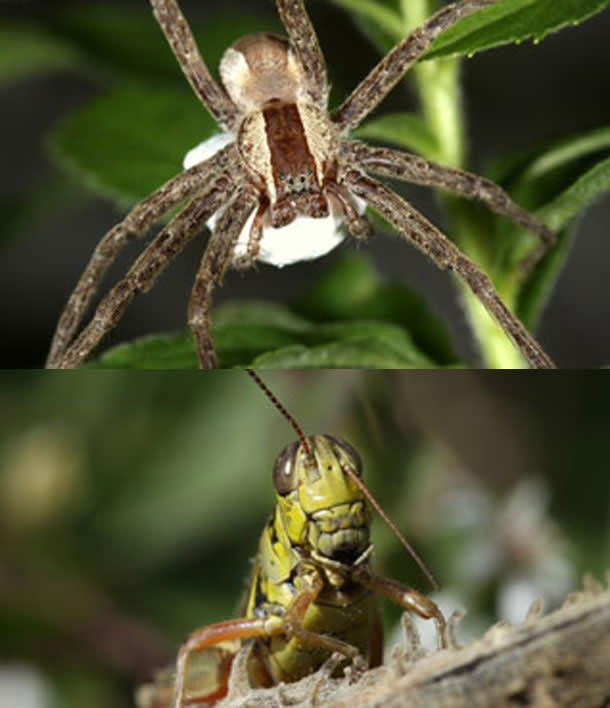 Even though most spiders are harmless to us, many people suffer from a crippling fear of them. Imagine then, what a grasshopper must feel. The threat of venomous fangs isn’t something that the insects can shrug off. It’s a perpetual danger that chemically alters their bodies, triggering changes that ripple through an entire ecosystem. Now, Dror Hawlena from Yale University has found just how far-reaching these changes can be. In an elegant experiment, he showed that the fear instilled by spiders can extend into the very soil, affecting how quickly leaf litter decays. Hawlena raised red-legged grasshoppers in outdoor enclosures, half a metre wide. Half the enclosures contained a single nursery-web spider, whose mouthparts had been glued shut, so they couldn’t actually kill any of the hoppers. Their presence, however, was felt. From past studies, we know that prey animals build up stress hormones and experience higher metabolic rates when predators are around. This soaks up a lot of energy, so stressed animals tend to eat more carbohydrate-rich food, high in carbon. They also spend less energy on growing or reproducing, so they eat relatively less protein-rich food, high in nitrogen. That’s exactly what Hawlena found with his grasshoppers – the ratio of carbon to nitrogen was 4 per cent higher in the stressed insects than the unthreatened ones. 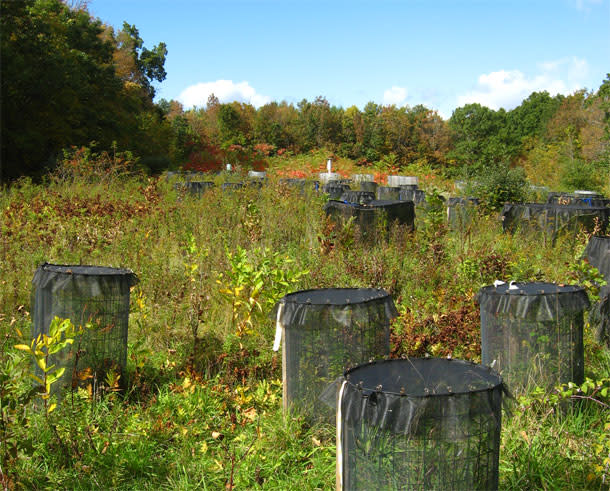 When the grasshoppers died, Hawlena buried their corpses in pots of soil within his lab, and let them decay for 40 days. He then added dead plants to the soil and used lasers to measure how quickly the carbon from their sugars and proteins was transferred into minerals or other compounds. This ‘mineralisation rate’ reflects how quickly the plants were decomposing. After 4 months, Hawlena found that the dead plants decomposed three times more quickly in soils seeded with stress-free grasshoppers, compared to those laced with the stressed insects. The tiny difference in their chemical composition was enough to drastically impede the decay of plants that shared the same soil. When Hawlena repeated his experiment in the wild, burying the grasshoppers in field plots, he found the same results (albeit with a smaller difference in the rate of decay). Is it plausible that such a little difference in the grasshoppers’ chemicals could produce such a big one in the plants’ decay rates? Hawlena says that even a little extra nitrogen in the soil can summon microbes that break down dead plants and animals. By providing less nitrogen, the frightened insects impeded the process of decay. To test that idea, he created “artificial grasshoppers” – packages of chitin (the substance that makes up insect shells), sugar and proteins in roughly the same levels as in an actual insect. He varied the carbon and nitrogen in these packages to mirror those of the actual grasshoppers, but kept everything else the same. He got the same results as before: the packages meant to simulate stress-free insects slowed the decay of plant litter compared to those meant to resemble stressed ones. Experiments like these remind us about the critical roles that predators play, and not just through killing prey animals. Their mere presence can have surprising knock-on effects. The fear and stress that they inspire aren’t just temporary states that come and go. They’re forces that are part of the natural landscape. They govern the chemical composition of living animals and the character of their environment, often in unexpected ways. Reference: Hawlena, Strickland, Bradford & Schmitz. 2012. Fear of Predation Slows Plant-Litter Decomposition. Science http://dx.doi.org/10.1126/science.1220097Images by Dror Hawlena