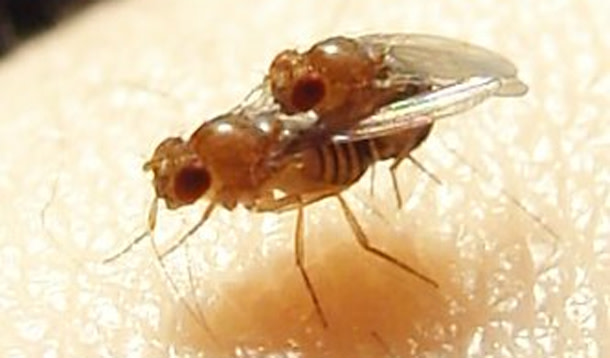 "A male fruitfly will try to court a female by nuzzling her genitals, tapping her abdomen and singing with his wings. If all that fails, he drowns his sorrows in booze." That's how my latest piece for Nature News starts. It's obviously a cute result, but there's some serious and intriguing science underlying it. These twin rewarding activities - sex and drinking - are linked by a chemical called neuropeptide F (NPF), which acts as a sort of currency of reward in the brain. The study suggests that NPF is part of a system that acts like a 'reward-thermostat'. If flies aren't getting rewarding feelings from sex, their levels of NPF fall, and this compels them to get their kicks elsewhere, such as in a boozy meal. Mammals also have a counterpart of NPF, known as NPY, which may play a similar role. It's depleted in the brains of people who attempt suicide or suffer from PTSD, and some clinical trials are testing it as a way of dealing with addictions or mood disorders. Go read the Nature News piece for more.