Extinct Birds Come Back to Haunt Us as Sculptures

Artist Christy Rupp reflects on the birds humans have driven to extinction by recreating them, one chicken bone at a time. 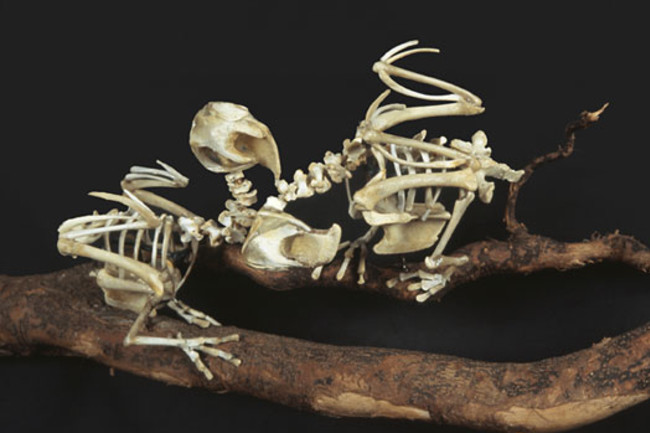 Artist Christy Rupp is not afraid of death. She revels in it, and her latest work--"Extinct Birds Previously Consumed by Humans"--uses the remains of the recently dead to recreate long-gone creatures. Her morbid, provocative sculptures are part of the show "Dead and Alive," currently on exhibit at the Museum of Arts and Design in New York City.

Rupp spent the last four years collecting chicken and turkey bones, and then meticulously assembled them into life-size representations of extinct birds. These Carolina parakeets, the only parrot native to the continental United States, once flew in large noisy flocks, feeding on agricultural crops. Farmers retaliated with their shotguns, and milliners took the green and yellow feathers to adorn ladies' hats. By 1920, the Carolina parakeets were gone. 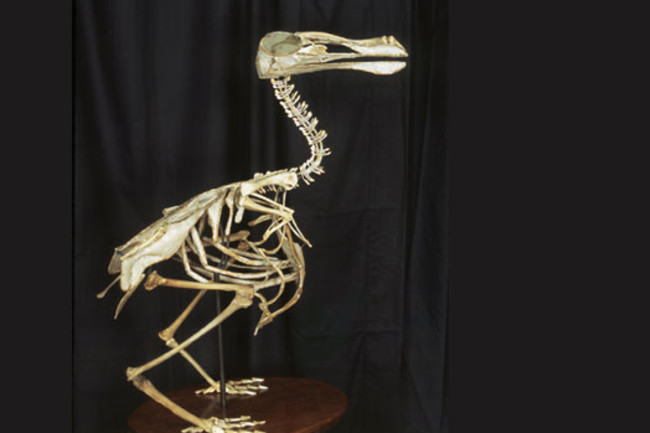 Rupp builds her skeletons using bones from the most commonly killed birds; worldwide, humans eat 77 million tons of poultry annually, the equivalent in weight to more than 200 Empire State Buildings. The seed of the idea came during the bird flu scare in 2004, when hundreds of millions of poultry birds were killed to prevent the spread of the H5N1 flu strain.

"Everyone thought the pandemic was going to kill us all," said Rupp, "but it seemed like a huge waste of life to me, even if those chickens were going to die for meat eventually. Chickens might not be like the romanticized version of extinct birds we'd see in a museum, but they're still birds."

The dodo, a three-foot-tall flightless bird with a great big beak, has become a symbol of extinction. The fearless bird lived on the island of Mauritius until humans came along in the 1600s with their tree-felling tendencies and egg-eating pets and livestock. 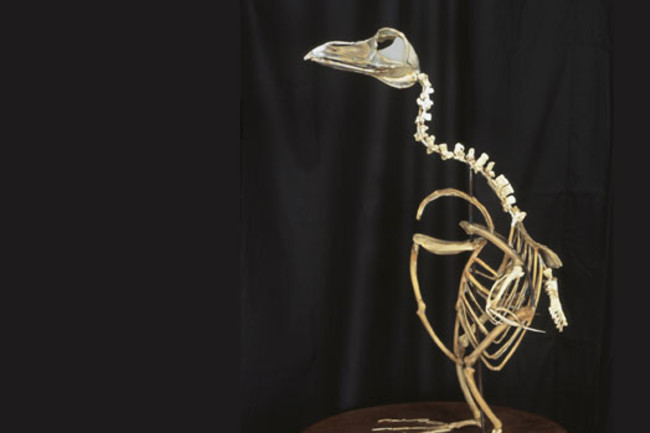 Rupp's question was, how to build a bird?

Inspiration about how to transform her artistic vision into reality came in the form of the children's book Make Your Own Dinosaur from Chicken Bones, along with trips to the American Museum of Natural History and one mail-ordered dead pigeon, which was a tough but necessary part of the process for the vegetarian artist.

She scavenged chicken bones from the plates of her friends at summer barbeques in the Catskills and anywhere else she could get away with it. Then she boiled, bleached, and dried the bones, drilling out the marrow to remove, as she described it, "the gushy parts." A coat of urethane sealed them shut.

Then, using a framework of metal, she constructed skeletal replicas of birds that no longer exist, including this great auk of Iceland, a penguin-like bird that plied the North Atlantic waters until the mid-1800s. While humans had hunted the auk for millennia, with Native Americans including the skins and bones in their death rituals, excessive hunting for meat and feathers was too much for the population to bear. All that remains now are museum specimens. Rupp used translucent Japanese mending papers stretched taut over the bones to create skulls that look eerily real. 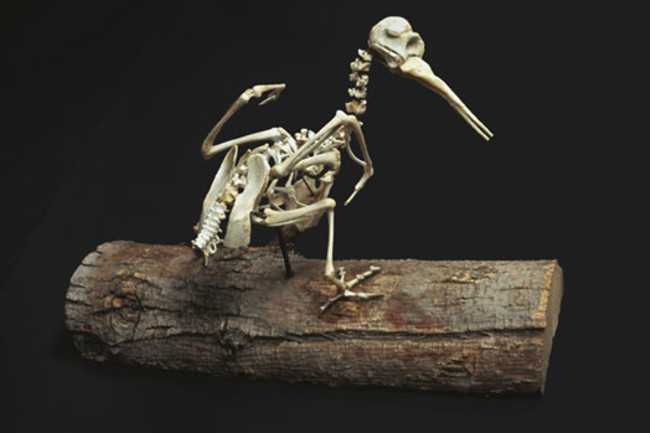 Rupp has been thinking about the relationship between humans and the natural world for more than thirty years. She moved to New York City shortly before the infamous garbage strike of 1979. Living in lower Manhattan, she watched as an alley by her apartment deepened with accumulated trash. "Rats," she said, "were everywhere."

Rupp came to the realization that she and the rats shared the urban habitat; it was because of human behavior that the rats were thriving. "We created a niche that they filled."

In the case of the ivory-billed woodpecker, the wood needed to create our human niches led to the decimation of the Southern old-growth forests that the red-capped bird needed to survive. A possible sighting in 2005 in the swampy forests of Arkansas fueled an excited frenzy that made people believe that maybe, just maybe, extinction isn't forever. But the existence of the woodpecker, not definitively seen since the 1940s, remains highly disputed. 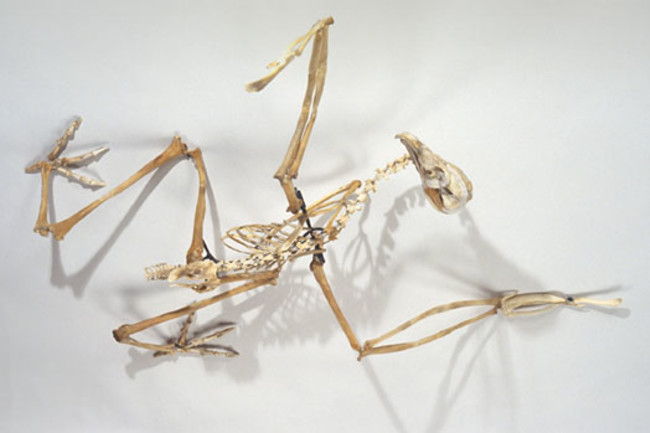 Rupp is part of a growing movement of eco-artists that are finding a new voice within the mainstream art world, although limited. Artists who care passionately about the environment and want to use their craft to enact change are finding forums worldwide, including such places as EcoArtSpace and the Green Museum, which defines as itself as a "giant collaborative art-making tool."

But eco-artists are still rare. Just like this California condor, which--though teetering on the edge of extinction--still soars near the Grand Canyon in Arizona and in the state it was named after. A major reintroduction effort is underway, and from a low of 22 individuals in 1982, the population has now tripled. Their greatest threat is death from lead poisoning when they scavenge the remains of deer that have been shot with bullets that still contain the lethal heavy metal. 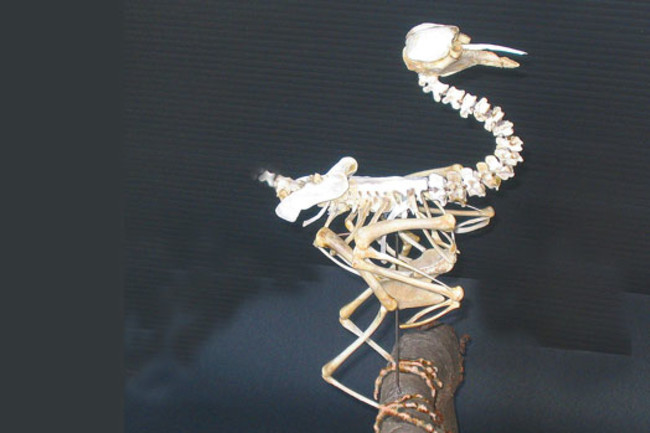 The passenger pigeon is long gone, hunted from the skies for cheap meat. While predation and habitat loss still remain major threats to wildlife, today's extinctions aren't always the result of something so deliberate as a bullet.

A State of the Birds report published last year by government and conservation organizations warned that bird species that have been in a steady decline now face added pressure from climate change. Birds from every habitat--from boreal forests to subtropical islands--will have to adapt to the shifts in their already compromised habitat. 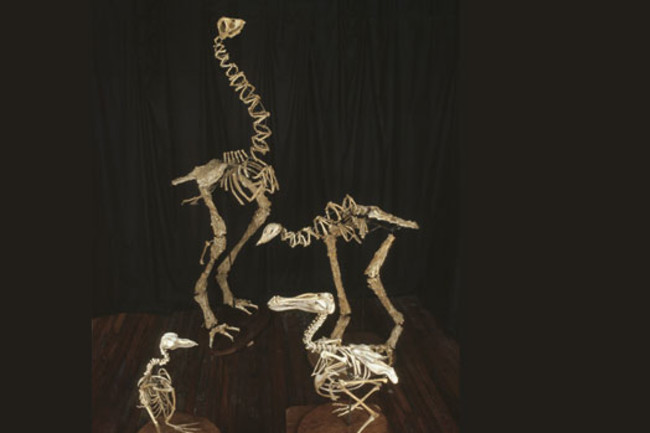 Many of the other pieces in the "Dead or Alive" show include death imagery: skulls made out of seeds, dissected owl pellets, and fly carcasses crafted into hovering fairies. It highlights, as the program explains, "the transience of life."

For eco-artists such as Rupp, there is a haunting beauty in bringing the past back, of recreating the dead and gathering them together--in this picture, a pair of moas, a great auk, and a dodo, birds that never would have met while alive--so that those of us in the world of the living can learn from them. 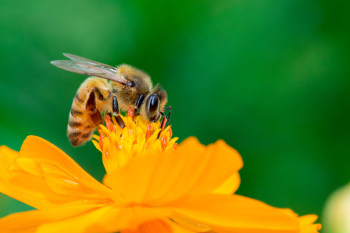 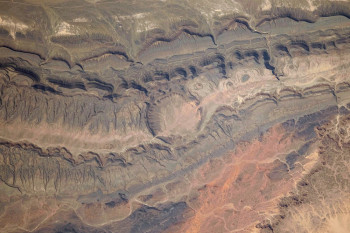 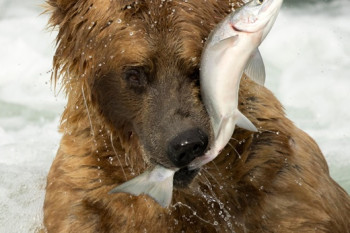