There's a lot to be said for smarts—at least we humans, with some of the biggest brains in relation to our bodies in the animal kingdom, certainly seem to think so. The size of animal brains is extravagantly well-studied, as scientists have long sought to understand why our ancestors developed such complex and energetically costly neural circuitry. One of the most interesting evolutionary hypotheses about brain size is The Expensive Tissue Hypothesis. Back in the early 1990s, scientists were looking to explain how brain size evolves. Brains are exceedingly useful organs; more brain cells allows for more behavioral flexibility, better control of larger bodies, and, of course, intelligence. But if bigger brains were always better, every animal would have them. Thus, scientists reasoned, there must be a downside. The hypothesis suggests that while brains are great and all, their extreme energetic cost limits their size and tempers their growth. When it comes to humans, for example, though our brains are only 2% of our bodies, they take up a whopping 20% of our energy requirements. And you have to wonder: with all that energy being used by our brains, what body parts have paid the price? The hypothesis suggested our guts took the hit, but that intelligence made for more efficient foraging and hunting, thus overcoming the obstacle. This makes sense, but despite over a century of research on the evolution of brain size, there is still controversy, largely stemming from the fact that evidence for the expensive tissue hypothesis is based entirely on between species comparisons and correlations, with no empirical tests. 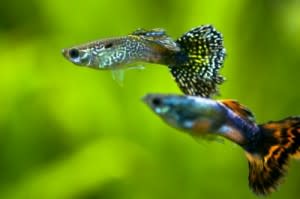 A unique study published this month in Current Biology has taken a new approach to examining this age old question. Rather than comparing species with bigger brain-to-body ratios to smaller-brained relatives, they exploited the natural variation of brain size in guppies (Poecilia reticulata). Guppies, as it turns out, aren't as dumb as they look. They're able to learn, and show rudimentary ability to count. Researchers from Uppsala University in Sweden were able to use their numerical abilities to test whether brain size affects intelligence in these simple fish. First, the team selected for larger and smaller brains from the natural variation in guppies. They successfully created smarty-pants guppies that had brains about 9% larger than their counterparts through artificial selection. Then, they put them to the test. While the males seemed to gain no benefits from possessing larger noggins, the females with bigger brains were significantly better at the task. But what was really remarkable was the cost of these larger brains. Gut size was 20% smaller in large-brained males and 8% smaller in large-brained females. The shrunken digestive system seemed to have serious consequences reproductively, as the smarter fish produced 19% fewer offspring in their first clutch, even though they started breeding at the same age as their dumber counterparts. And, the authors noted, this was in an idealized tank setting with an plenty of food—what about in the wild, where resources are harder to come by? How much of a cost does a reduced gut have when meals aren't guaranteed? "Because cognitive abilities are important to facilitate behaviors such as ?nding food, avoiding predation, and obtaining a mate, individuals with increased cognitive abilities are likely to have higher reproductive success in the wild," explain the authors. These benefits, though, don't come cheap. "Our demonstration of a reduction in gut size and offspring number in the experimental populations selected for larger relative brain size provides compelling experimental evidence for the cost of increased brain size." There are still many questions to be answered. For example, the authors aren't entirely sure why females were the only ones to show cognitive improvement with larger brains. They suggest that, perhaps, the researcher's measure of intelligence (the numerical task presented to the guppies) may be be geared toward female behaviors. "In the guppy, females are more active and innovative while foraging," they explain. "Because females feed more, they may thus have had more time to associate the cue with food in our experimental design." The clear trade-off between brains and guts, though, is an important finding. By providing empirical evidence for the physiological costs of brains, this study provides the ?rst direct support for the expensive-tissue hypothesis, and can provide us with insights into how our own big brains evolved. One of the prevailing hypothesis for our own brain growth is that the incorporation of more animal products into our diets

, through hunting or cooking

or however, allowed us to obtain more energy from less food, thus offsetting the cost of a reduced gut. The less food we needed to eat for the same amount of energy, the more our brains could grow even if our guts suffered for it. The debate, however, is far from over. Comparative analyses in primates don't support a gut-brain tradeoff

, and there are certainly plenty of other hypothesis as to how and why we developed our massive lobes

, and what prices our bodies paid for them.