Evolution: The Rise of Complexity

Let's rewind time back about 3.5 billion years. Our beloved planet looks nothing like the lush home we know today - it is a turbulent place, still undergoing the process of formation. Land is a fluid concept, consisting of molten lava flows being created and destroyed by massive volcanoes. The air is thick with toxic gasses like methane and ammonia which spew from the eruptions. Over time, water vapor collects, creating our first weather events, though on this early Earth there is no such thing as a light drizzle. Boiling hot acid rain pours down on the barren land for millions of years, slowly forming bubbling oceans and seas. Yet in this unwelcoming, violent landscape, life begins. The creatures which dared to arise are called cyanobacteria, or blue-green algae. They were the pioneers of photosynthesis, transforming the toxic atmosphere by producing oxygen and eventually paving the way for the plants and animals of today. But what is even more incredible is that they were the first to do something extraordinary - they were the first cells to join forces and create multicellular life. It's a big step for evolution, going from a single cell focused solely on its own survival to a multicellular organism where cells coordinate and work together. Creationists often cite this jump as evidence of God's influence, because it seems impossible that creatures could make such a brazen leap unaided. But scientists have shown that multicellularity can arise in the lab, given strong enough selective pressure. Just ask William Ratcliff and his colleagues at the University of Minnesota. In a PNAS paper published online this week, they show how multicellular yeast can arise in less than two months in the lab. To achieve this leap, they took brewer's yeast - a common, single celled lab organism - and grew them in a liquid medium. Once a day, they gently spun the yeast in the culture, starting the next batch with whichever cells ended up at the bottom of the tube. Because the force of spinning pulls larger things down first, clumps of cells were more likely to be at the bottom than single ones, thus setting up a strong selective pressure for multicellularity.

All of their cultures went from single cells to snowflake-like clumps in less than 60 days. "Although known transitions to complex multicellularity, with clearly differentiated cell types, occurred over millions of years, we have shown that the ?rst crucial steps in the transition from unicellularity to multicellularity can evolve remarkably quickly under appropriate selective conditions," write the authors. These clumps weren't just independent cells sticking together for the sake of it - they acted as rudimentary multicellular creatures. They were formed not by random cells attaching but by genetically identical cells not fully separating after division. Furthermore, there was division of labor between cells. As the groups reached a certain size, some cells underwent programmed cell death, providing places for daughter clumps to break from. Since individual cells acting as autonomous organisms would value their own survival, this intentional culling suggests that the cells acted instead in the interest of the group as a whole organism. Given how easily multicellular creatures can arise in test tubes, it might then come as no surprise that multicellularity has arisen at least a dozen times in the history of life, independently in bacteria, plants and of course, animals, beginning the evolutionary tree that we sit atop today. Our evolutionary history is littered with leaps of complexity. While such intricacies might seem impossible, study after study has shown that even the most complex structures can arise through the meandering path of evolution. In Evolution's Witness, Ivan Schwab explains how one of the most complex organs in our body, our eyes, evolved. Often touted by Intelligent Designers as 'irreducibly complex', eyes are highly intricate machines that require a number of parts working together to function. But not even the labyrinthine structures in the eye present an insurmountable barrier to evolution. Our ability to see began to evolve long before animals radiated. Visual pigments, like retinal, are found in all animal lineages, and were first harnessed by prokaryotes to respond to changes in light more than 2.5 billion years ago. But the first complex eyes can be found about 540 million years ago, during a time of rapid diversification colloquially referred to as the Cambrian Explosion. It all began when comb jellies, sponges and jellyfish, along with clonal bacteria, were the first to group photoreceptive cells and create light-sensitive 'eyespots'. These primitive visual centers could detect light intensity, but lacked the ability to define objects. That's not to say, though, that eyespots aren't important - eyespots are such an asset that they arose independently in at least 40 different lineages. But it was the other invertebrate lineages that would take the simple eyespot and turn it into something incredible. According to Schwab, the transition from eyespot to eye is quite small. "Once an eyespot is established, the ability to recognize spatial characteristics - our eye definition - takes one of two mechanisms: invagination (a pit) or evagination (a bulge)." Those pits or bulges can then be focused with any clear material forming a lens (different lineages use a wide variety of molecules for their lenses). Add more pigments or more cells, and the vision becomes sharper. Each alteration is just a slight change from the one before, a minor improvement well within bounds of evolution's toolkit, but over time these small adjustments led to intricate complexity. 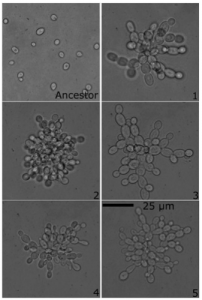 In the Cambrian, eyes were all the rage. Arthropods were visual trendsetters, creating compound eyes by using the latter approach, that of bulging, then combining many little bulges together. One of the era's top predators, Anomalocaris, had over 16,000 lenses! So many creatures arose with eyes during the Cambrian that Andrew Parker, a visiting member of the Zoology Department at the University of Oxford, believes that the development of vision was the driver behind the evolutionary explosion. His 'Light-Switch' hypothesis postulates that vision opened the doors for animal innovation, allowing rapid diversification in modes and mechanisms for a wide set of ecological traits. Even if eyes didn't spur the Cambrian explosion, their development certainly irrevocably altered the course of evolution. Our eyes, as well as those of octopuses and fish, took a different approach than those of the arthropods, putting photo receptors into a pit, thus creating what is referred to as a camera-style eye. In the fossil record, eyes seem to emerge from eyeless predecessors rapidly, in less than 5 million years. But is it really possible that an eye like ours arose so suddenly? Yes, say biologists Dan-E. Nilsson and Susanne Pelger. They calculated a pessimistic guess as to how long it would take for small changes - just 1% improvements in length, depth, etc per generation - to turn a flat eyespot into an eye like our own. Their conclusion? It would only take about 400,000 years - a geological instant. But how does complexity arise in the first place? How did cells get photoreceptors, or any of the first steps towards innovations such as vision? Well, complexity can arise a number of ways. 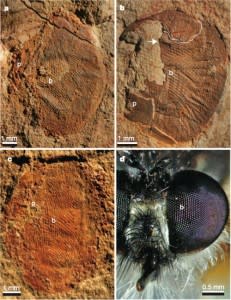 Each and every one of our cells is a testament to the simplest way that complexity can arise: have one simple thing combine with a different one. The powerhouses of our cells, called mitochondria, are complex organelles that are thought to have arisen in a very simple way. Some time around 3 billion years ago, certain bacteria had figured out how to create energy using electrons from oxygen, thus becoming aerobic. Our ancient ancestors thought this was quite a neat trick, and, as single cells tend to do, they ate these much smaller energy-producing bacteria. But instead of digesting their meal, our ancestors allowed the bacteria to live inside them as an endosymbiont, and so the deal was struck: our ancestor provides the fuel for the chemical reactions that the bacteria perform, and the bacteria, in turn, produces ATP for both of them. Even today we can see evidence of this early agreement - mitochondria, unlike other organelles, have their own DNA, reproduce independently of the cell's reproduction, and are enclosed in a double membrane (the bacterium's original membrane and the membrane capsule used by our ancestor to engulf it). Over time the mitochondria lost other parts of their biology they didn't need, like the ability to move around, blending into their new home as if they never lived on their own. The end result of all of this, of course, was a much more complex cell, with specialized intracellular compartments devoted to different functions: what we now refer to as a eukaryote. Complexity can arise within a cell, too, because our molecular machinery makes mistakes. On occasion, it duplicates sections of DNA, entire genes, and even whole chromosomes, and these small changes to our genetic material can have dramatic effects. We saw how mutations can lead to a wide variety of phenotypic traits when we looked at how artificial selection has shaped dogs. These molecular accidents can even lead to complete innovation, like the various adaptations of flowering plants that I talked about in my last Evolution post. And as these innovations accumulate, species diverge, losing the ability to reproduce with each other and filling new roles in the ecosystem. While the creatures we know now might seem unfathomably intricate, they are the product of billions of years of slight variations accumulating. Of course, while I focused this post on how complexity arose, it's important to note that more complex doesn't necessarily mean better. While we might notice the eye and marvel at its detail, success, from the viewpoint of an evolutionary lineage, isn't about being the most elaborate. Evolution only leads to increases in complexity when complexity is beneficial to survival and reproduction. Indeed, simplicity has its perks: the more simple you are, the faster you can reproduce, and thus the more offspring you can have. Many bacteria live happy simple lives, produce billions of offspring, and continue to thrive, representatives of lineages that have survived billions of years. Even complex organisms may favor less complexity - parasites, for example, are known for their loss of unnecessary traits and even whole organ systems, keeping only what they need to get inside and survive in their host. Darwin referred to them as regressive for seemingly violating the unspoken rule that more complex arises from less complex, not the other way around. But by not making body parts they don't need, parasites conserve energy, which they can invest in other efforts like reproduction. When we look back in an attempt to grasp evolution, it may instead be the lack of complexity, not the rise of it, that is most intriguing. Other Posts in the Evolution Series: 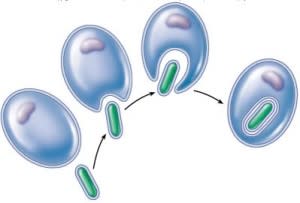