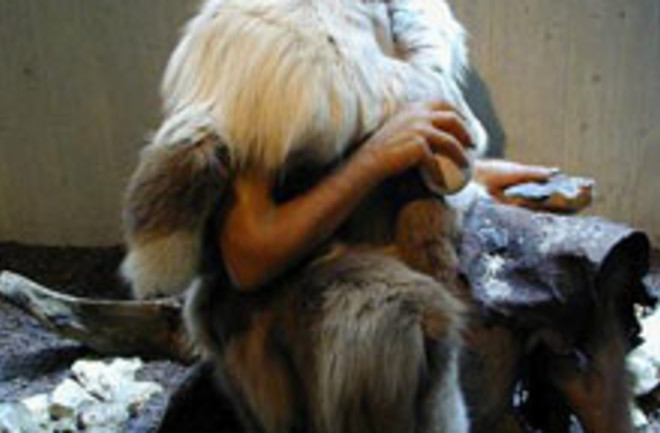 Over the past few years, studies have chipped away at the old-fashioned stereotype of dense and dumb Neanderthals. Archaeological excavations suggested the hominids made tools and weapons, fashioned jewelry, or possessed other mental faculties some presumed only early humans to have. The Neanderthal renaissance may be in danger. For a study in the Proceedings of the National Academy of Sciences this week, radiocarbon dating expert Thomas Higham tested one of the most important Neanderthal sites in the world—Grotte du Renne in France—and found that all is not well in dating the artifacts that some archaeologists have connected to Neanderthals.

The key finding is that as you dig down through the layers of sediment in the Grotte du Renne, the age of the remains does not increase as you would expect. Instead, the ages of the different objects are all over the place, suggesting that remains from different eras have got mixed up together. [New Scientist]

The problem, then, is that if you find jewelry buried at the same level as Neanderthals who lived, say, 40,000 years ago, the mixing means you can't be sure those ornaments or tools or other artifacts actually belonged to the Neanderthals, or were created by them. Grotte du Renne isn't the world's only great Neanderthal

site, but its historical extent had made it invaluable to scientists and one of the most important sites for finding that support Neanderthal tool- or jewelry-making.

The Grotte du Renne was excavated between 1949 and 1963 by the late French prehistorian André Leroi-Gourhan, who found 15 levels of hominid occupation ranging from about 45,000 to 28,000 years ago. This period includes the overlapping occupation of Europe by Neandertals, who show up about 130,000 years ago and disappear no later than 30,000 years ago, and modern humans, who arrived in Europe between 45,000 and 40,000 years ago and stayed for good. [ScienceNOW]

Can the site's legacy be saved? Other paleoarchaeologists who've worked Grotte du Renne—or simply sparred a lot with Higham—dispute that the new study throws everything that's been done there into question. In addition, Jean-Jacques Hublin says, Higham's team couldn't dispute one thing: the age of the Neanderthal bones themselves. Higham's analysis was done on things like bone tools.

Hublin also pointed out that Higham's team wasn't able to calculate ages for the Neanderthal bodies found at Grotte du Renne, because the tooth and bone samples required for the analysis would be destroyed during the carbon-dating process. Perhaps the Neanderthal remains would have registered as the same age as the disputed artifacts, he said. "The only way to address these questions is to directly date the [Neanderthal] remains," Hublin said. [Los Angeles Times]