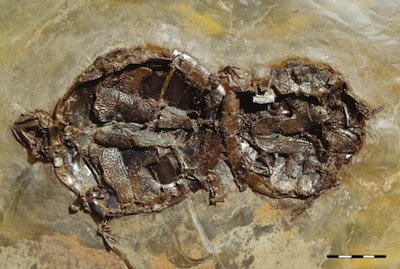 If these fossilized turtles had a final thought, it was probably, “If you’ve gotta go, go out with a bang!” New evidence suggests that the ancient reptiles died while mating and were preserved in their final embrace. Germany’s Messel Pit Fossil Site contains black oil shale that has preserved even the soft tissues of tens of thousands of 47-million-year-old fossils. Among them, the only ones found in pairs were nine sets of coupled carettochelyid turtles, and although previous research speculated that the reptiles were copulating, there was no proof until now. German researchers discovered

that the turtles were all in male-female pairs (in the above image, the larger fossil on the left is the female), and that their tails were aligned, a position that indicates the close contact of a mating stance. The researchers speculate that the turtles began mating in the habitable surface water of the Messel lake, stopped swimming, and sank into a “deadly abyss,” a depth rendered toxic by built-up volcanic gases and decayed organic materials. Distracted by their activity, the couple absorbed the poisons through their skins without realizing their danger until it was too late. When their bodies reached the lake bottom, sediment covered them and immortalized them in the act. [via Nature News