Ever wonder what your outdoor cat does all day long? Behold the KittyCam! 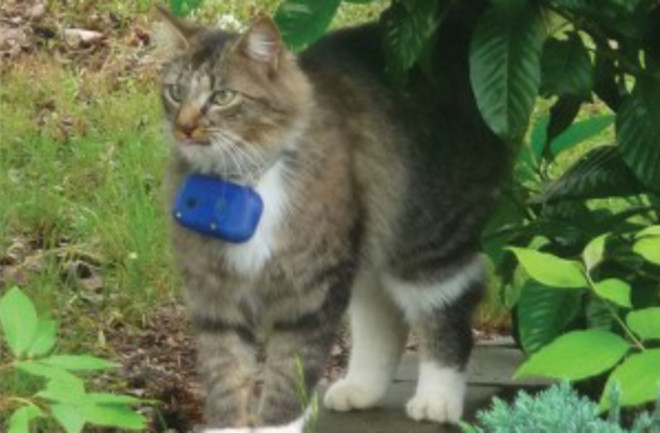 Free-roaming cat wearing a KittyCam On this week's episode of "The Real Housecats of Athens, Georgia": as researchers watch, the KittyCam-wearing felines indulge in risky behaviors ranging from possum rendezvous to drinking strange substances to wandering about in storm drains. Stay tuned for the thrilling footage (after the jump)!Risk behaviours exhibited by free-roaming cats in a suburban US town. "Free-roaming cats may experience numerous hazardous encounters in the outdoor environment, including: vehicular accidents, aggression from other animals and exposure to infectious disease. This research quantitatively examined the outdoor activities of 55 owned cats by monitoring pets outfitted with 'KittyCam' video cameras. KittyCams are a type of Crittercam, designed by National Geographic to allow recording of a cat-eye view without disrupting behaviour. We investigated the activities of free-roaming cats in suburban Athens-Clarke County, Georgia, during all four seasons. Research objectives included documenting the type and regularity of risk behaviours exhibited by free-roaming cats and identifying characteristics of pet cats (eg, age, sex, roaming habitat) which predict risky behaviour in the outdoors. The most common risk behaviours exhibited by suburban free-roaming cats included crossing roads (45 per cent of our sample), encountering strange cats (25 per cent), eating and drinking substances away from home (25 per cent), exploring storm drain systems (20 per cent), and entering crawlspaces of houses (20 per cent). Male cats were more likely to engage in risk behaviours than female cats, and older cats engaged in fewer risk behaviours than younger individuals. We hope this information can be used to encourage the public to keep cats indoors more often (with consideration for their indoor quality of life) or supervise them while outdoors." Bonus Figure from the full text:

Want more KittyCam? Check out the KittyCam website for photos and videos!

NCBI ROFL: Domestic cats do not show causal understanding in a string-pulling task.

NCBI ROFL: Optimizing the sensory characteristics and acceptance of canned cat food: use of a human taste panel.