Anyone who reads this blog regularly knows I have a big bone to pick with the organic movement, particularly with their constant attack on genetic engineering. I applauded when Prop 37 failed in California, and have put out post after post explaining why GMOs aren't the root of all evil. That's not to say I'm pro Monsanto, or think every GMO is science's gift to humanity. But the universal fear and demonization of all genetic technology is, simply put, damaging and unfounded. 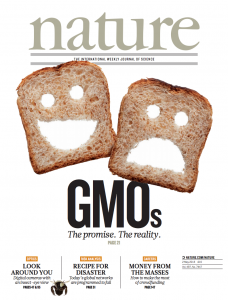 Turn that frown upside-down — the newest Nature issue defends GMOs. Cover image provided by Nature. Now, the top-tier scientific journal Nature has weighed in. In their "GM Crops: Promise & Reality" issue this week, several articles explore "the messy middle ground." With titles like "Tarnished Promise" and "A Hard Look At GM Crops," you might think they attack genetic engineering, but in fact, the entire issue does the opposite, standing in support of crop genetic engineering technologies and pleading to rethink the knee-jerk reaction against them. Even the "Hard Look" concludes, "Tidy stories, in favour of or against GM crops, will always miss the bigger picture, which is nuanced, equivocal and undeniably messy. Transgenic crops will not solve all the agricultural challenges facing the developing or developed world... But vilification is not appropriate either. The truth is somewhere in the middle." Which is exactly what I've been saying all along.  "Over the past 50 years, improved crop varieties have contributed almost 1% each year to the gains made in worldwide agricultural productivity," explains Christopher Whitty, chief scientific adviser at the UK Department for International Development (DFID), and colleagues in their comment piece "Africa and Asia need a rational debate on GM crops". "To begin with an emotional debate about GM techniques is to look down the wrong end of the telescope." Whitty and his colleagues aren't Monsanto shills; they're scientists that have carefully weighed the evidence. And they're among the majority of scientists that support GM technologies, even though they say GMOs aren't an agricultural panacea. "Genetic engineering is not essential, or even useful, for all crop improvements," they write. But, they come down hard on blanket bans against genetically engineered crops. "Excluding any technology that can help people to get the food and nutrition that they need should be done only for strong, rational and locally relevant reasons." To support their case, they specifically cite three examples of GMOs — vitamin A-boosted golden rice, poo-borer-resistant cowpea, and water-efficient maize — that they consider "potential life savers." They also make special note of the western world's privileged status when it comes to debating GMOs, and argue that developing countries shouldn't simply follow the leader when it comes to genetic technology policies. "It makes little sense for decisions on GM crops to be overly influenced by European perspectives... where the benefits of better crop yields are slight, the risks (although largely theoretical, and in some cases, arguably irrational) may dominate in a risk–benefit analysis." Meanwhile, in a different comment piece, Fusuo Zhang and colleagues describe how “driven by an urgent need to both produce more food and lessen the environmental impact of agriculture — and with more money to address the problem than most — Chinese scientists are working out how to push crop yields close to their biophysical limits.” And, of course, GMOs are playing an important role in these efforts to improve efficiency and sustainability. "The development of new crop varieties and hybrids is one of several areas of fundamental research," the authors write, "with transgenic technology becoming an increasingly important element in recent years." The use Bt cotton as an example (the first GM crop approved for commercial use in China), citing that, with it, farmers have increased yields by nearly 6% and reduced the use of insecticides by around 80% in the past 8 years. In spite of the Chinese public's wariness about genetic engineering, the government poured almost $4 billion US into a 12-year GM research and development initiative. "In the face of climate change, pushing yields to the limit while sparing resources and reducing environmental consequences is a crucial goal for all," they conclude. And the next generation of GM crops are on their way, explains Daniel Cressey in his news feature "A New Breed." "New tools offer unparalleled precision in editing genes," he explains. "Some of these crops will tackle new problems, from apples that stave off discolouration to ‘Golden Rice’ and bright-orange bananas fortified with nutrients to improve the diets of people in the poorest countries." The main goal of GM researchers now: use what you've already got. "The real power of these techniques lies in the ability to confer new traits by modifying native plant genes," Cressey explains. He writes about researchers that are using modifications to a plant's actual genes, not the insertion of genes from other species, to combat common problems. Cressey notes that using the plants own genetic material "could conceivably reduce the public disquiet over GM foods." "US regulators have already suggested that organisms modified with the newer techniques such that they contain no DNA from other species will be treated differently from conventional GM organisms," he explains. 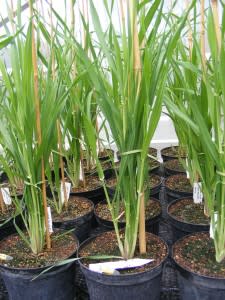 One of the many applications of transporters cited in Schroeder et al.'s perspective: barley engineered for enhanced zinc content. Around two billion people suffer from iron and zinc deficiencies worldwide. Image courtesy of The John Innes Centre Nature further has an entire perspective article dedicated to one way in which scientists may be able to achieve the lofty goal of improving without adding: alterations in membrane transporters. "Transport proteins embedded within membranes are key targets for improving the efficiency with which plants take up and use water and nutrients," explain the international team of 11 scientists led by Julian Schroeder, UC San Diego biology professor. The new wave of genome sequencing, they say, has led to incredible leaps in understanding of the natural genetic diversity of plant membrane transporters, which can be exploited through conventional breeding or genetic engineering."Just as our cell phones will need more advanced technology to carry more information, plants need better or new transporters to make them work harder on existing agricultural land," said Dale Sanders, director of the John Innes Centre in the U.K. and a corresponding co-author of the paper, in a press release. "We can make plants better at finding and carrying their own chemical elements." By tinkering with these genes, scientists can improve nutrient content and increase drought, flood, or salinity tolerance. "We expect that research into fundamental mechanisms of plant membrane transport processes will continue to produce surprises and breakthroughs that will provide new avenues towards a more sustainable and productive agriculture in the face of impending challenges," write the authors. That's not to say that using native plant genes should be the only way to engineer better crops. There is plenty of good being done with cross-species gene transfer, too. Cressey discusses how non-agribusiness researchers are focusing on locally used plants instead of big money makers, hoping to improve crops for developing countries. Nutritional enhancement is a common goal, including crops like golden rice and fortified bananas. These researchers are trying to solve real global issues, whether or not Monsanto and other large agricultural companies are backing them. Even the harshest article in this new Nature issue defends GM crops. In "A Hard Look At GM Crops," Natasha Gilbert examines the myths and truths of the GM debate. Is Bt cotton leading to suicides in India? Nope. "The claim, based on an increase in total suicide rates across the country in the late 1990s, has become an oft-repeated story of corporate exploitation since Monsanto began selling GM seed in India in 2002," Gilbert explains, but the fact is "there has been essentially no change in the suicide rate for farmers since the introduction of Bt cotton." Are GM crops causing superweeds? Well, yes, but that's not the whole story. "Twenty-four glyphosate-resistant weed species have been identified since Roundup-tolerant crops were introduced in 1996," Gilbert explains, "But herbicide resistance is a problem for farmers regardless of whether they plant GM crops. Some 64 weed species are resistant to the herbicide atrazine, for example, and no crops have been genetically modified to withstand it." The end result of Gilbert's "Hard Look" is a hard look at the arguments against GMOs, not the GMOs themselves. As she explains, "These controversial case studies show how blame shifts, myths are spread and cultural insensitivities can inflame debate." The point being made over and over by these pieces is that GM crops are a part of the future of agriculture, and they should be. As fellow Discover blogger Keith Kloor has pointed out many times before, "Unfortunately, the public GMO discourse is dominated by phony, pseudoscientific claims advanced by ideologically motivated activists and their enablers in the media." Kloor comes down hard on the media's willingness to portray GMOs as dangerous in spite of a complete lack of any scientific evidence whatsoever. "In truth," he writes, "the uncontrollable spread of disinformation about GMOs is what’s really contaminating the environment." I completely agree. As I've said before , the future of agriculture needs to use all tools available to tackle the growing problems of malnutrition, population growth, and ecological impact. If we universally apply the same methods globally, we are destined to fail both in terms of efficiency and sustainability. It is only through the breakdown of arbitrary and variable distinction between methodologies like "organic" and "conventional," scientific rigor in our approach to studying technologies and methods, and integration of a variety of practices that we will achieve our ultimate goal of a bright future both agriculturally and ecologically. I'm glad to see such a prominent journal focus on this hot-button issue, especially with such staunch defense of technology. Genetic engineering isn't the enemy of sustainable agriculture, even if Monsanto or other agri-businesses are. The technology itself is unbiased, and can be used to revolutionize food production globally. To blanket attack technologies with the potential to help billions while lessening our impact on the rest of the Earth is counter-productive to everything the environmental movement stands for. It's time we stop villainizing GMOs, and start using science and technology to secure a healthy, sustainable future. Citations: The Nature special issue: http://nature.com/gmcrops