Endangered Frogs Encouraged to Get Amorous in an Amphibian "Love Shack" 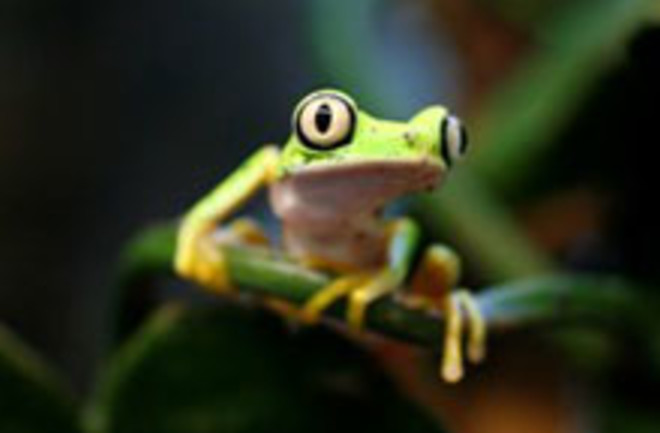 We know that dim lights, a little Marvin Gaye, and a lot of red wine usually do the trick to get humans in the mood for some nookie. But what encourages endangered frogs to get it on? Apparently, they are a fussy lot, and demand that the temperature be just right and that the humidity and day length be just so; only then will they kick off their slippers for a little bit of action. So, the Bristol Zoo obliged a few endangered frogs by building them a love shack, a specially designed "AmphiPod" with controlled natural conditions that will hopefully encourage the endangered frogs to breed. Scientific American reports: In addition to mimicking the frogs' natural habitat, AmphiPod will also help to protect them against disease, including the deadly chytrid fungus that is rapidly devastating frog populations around the world. Right now, the AmphiPod is housing the lemur leaf frog (Hylomantis lemur) from Panama and Costa Rica, and Madagascar's golden mantella frog (Mantella aurantiaca). The leaf frog has already lost almost 80 percent of its population to the deadly chytrid fungus while the golden mantella's home is being destroyed due to rapid deforestation. Bristol Zoo authorities will be watching the love shack closely to see if these amphibians get amorous. If the scheme seems to work, other frog couples from different endangered species could be given honeymoons in the love getaway.