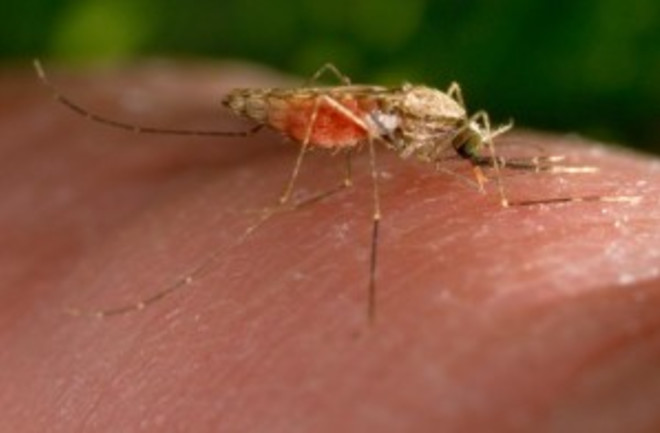 An Anopheles gambiae mosquito gorging herself on blood. Photo by Jim Gathany, from the CDC's Public Health Image Library By the time you realize what has happened, it's too late. An Anopheles gambiae mosquito can land on your skin completely unnoticed. While you continue unaware, she stealthily walks over your exposed flesh, searching, probing the surface of your skin with her proboscis until she finds a blood vessel. She then situates her body perfectly at just the right angle, hunches down, and plunges her needle-like mouthparts into your skin. Tiny pumps pull the warm, protein-rich blood into her mouth. With every millisecond increasing her chances of exposure, she drinks as quickly as she can. Your hand isn't the only obstacle she faces: even as she sucks, your body senses the wound and attempts to plug the hole by forming a clot. She needs your warm, nutritious blood for her eggs, so she's not about to let your protective mechanisms interfere. To ensure her meal keeps flowing, she pumps saliva laden with anti-coagulants and vasodilators into the wound — and that's when it happens. That's when the Plasmodium falciprum sporozoites that have been waiting patiently in her salivary glands enter your bloodstream. Dozens can hitch a ride in her saliva, but it only takes one to cause malaria. One single, microscopic protozoan is enough to kill you. Responsible for the most dangerous kind of malaria and at least half of malaria cases worldwide, Plasmodium falciprum is estimated to kill somewhere between 500,000 and 1 million people every year. In recent years, the parasite has developed resistance to many of our best treatments, leaving doctors without options in the over one hundred countries where malaria is endemic. While scientists continue to research new means of treatment from vaccines to drugs, nations struggling with malaria have shifted focus to prevention. Recently, this means scientists have become particularly interested in mosquito behavior to develop better, cost-effective control mechanisms. But a new study in PLoS ONE today suggests we know less than we might have thought, and that the parasite may be influencing its host mosquitos in ways we never even imagined. "So far, most studies of Anopheles gambiae mosquito behavior have been conducted with uninfected mosquitoes," write the authors, "but our data demonstrate that such results may not be representative of infected mosquitoes." Previous studies found that Plasmodium-infected mosquitos probe skin more, bite more often and ingest larger meals than uninfected ones, but the scientific team comprised of scientists from the Netherlands, United Kingdom, and United States wondered whether infected mosquitos behave differently before they land. Many parasites with multiple hosts are known to alter one hosts' behavior to increase transmission to the next. Toxoplasma gondii, for example, suppresses rats' fear of cats by altering how they respond to feline smells. The research team wondered if Plasmodium could control mosquitos along the same lines, so they tested how uninfected and infected mosquitos reacted to the scent of human skin. Their results were staggeringly significant.

Figure 1 A from Smallegange et al. The total number of landings by uninfected (green bars) and P. falciparum infected (red bars) mosquitos in response to no odor (left) or human skin odor (right). Infected Anopheles mosquitos landed on the human-scented surface more than three times as often as non-infected mosquitos. "These results suggest that malaria-infectious females are more attracted to human odors than uninfected mosquitoes," write the authors. "This is the first indication of a change in [mosquito] behavior in response to human odor, caused by infection with P. falciparum." The authors hope this research spurs further study into the ways in which Plasmodium alters mosquito senses. New types of attractant smells, for example, could lead to breakthroughs in trapping technology and provide powerful allies in the struggle against malaria. But the discovery that mosquitos act differently when infected has its downsides, too. If the parasites can change how the mosquitos smell, how much does this alter how they behave? Are the usual battery of deterrent or attractant smells less effective? Is the alluring scent enough to draw mosquitos to feed when they normally wouldn't, making our nightly netting less meaningful? Are there any other ways that the parasite alters its host, and what do these changes in behavior mean when it comes to bite prevention? There is a long road ahead before scientists will fully understand the complex interactions between Plasmodium and their hosts. Studies like this one reveal just how little we understand these deadly parasites of ours, and how much more we have to learn if we want to win the battle against them. Citation: