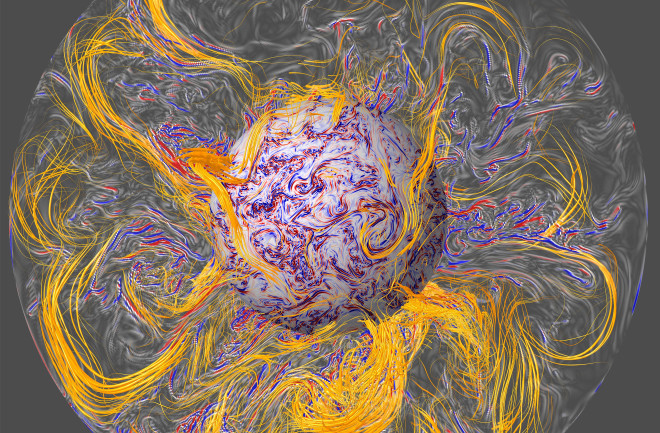 Hidden amid these colorful swirls are a bunch of jerks that could mess with your phone’s maps app. But thanks to this vivid computer simulation of our planet’s core, published recently in Nature Geoscience, researchers are finally able to model and explain these so-called geomagnetic jerks. The long-mysterious phenomena, discovered in 1978, can introduce errors in technologies tied to Earth’s magnetic field, including satellites and power grids.

Just beyond Earth’s solid inner core (center), the circulation of molten metals shapes our planet’s magnetic field. Over centuries, a slow and steady transfer of energy through convection — hotter materials (red) rising as cooler materials (blue) sink — gradually shifts the field (orange). However, sometimes sudden, unpredictable changes occur in a fraction of the time. These are the jerks.

Using the new simulation, researchers were able to link geomagnetic jerks to a type of rapid energy wave. Unlike convection’s circular movement, these waves reach the core’s surface like a tsunami, leading to a fast jerk in the magnetic field. Understanding what creates the phenomena may help scientists better predict them, and potentially limit the mayhem they can cause.

[This story originally appeared in print as "What a Jerk."]