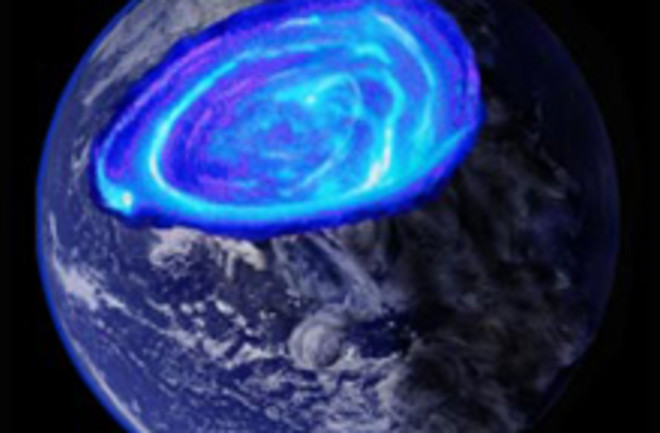 Here we are drinking coffee and tweeting and otherwise going about our lives, generally not giving much thought to the protection that the Earth's magnetic field affords us from the solar wind. But that magnetic field is crucial for our existence. Now, new findings in Science say that this protective shield originated even 200 million years earlier than scientists had previously thought, perhaps protecting the planet's water from evaporating away and aiding the rise of life on the early Earth. To know about the planet's magnetic field three and a half billion years ago, you need iron, which records not only the direction but also the strength of the magnetic field when it forms. In South Africa, study leader John Tarduno and his team found quartz with iron tucked inside that had remained unchanged in all those years.

Using a specially designed magnetometer and improved lab techniques, the team detected a magnetic signal in 3.45-billion-year-old rocks that was between 50 and 70 percent the strength of the present-day field, Tarduno says [Science News]

. Three years ago he made a similar find in rocks 3.2 billion years old; thus, this find pushes back the Earth's magnetic field at least another 200 million years. Still, you or I wouldn't find the Earth of that era to be terribly hospitable. In the sun's more turbulent youth, it likely spun faster and unleashed a greater barrage of radiation. Not only was the Earth's magnetic field strength quite a bit less than it is today, but also the magnetopause—the furthest extent of the field, where it meets the incoming solar wind—stretched only half as far out from the planet as it does today.

With the magnetopause so close to Earth, the planet would not have been totally shielded from the solar wind and may have lost much of its water early on, the researchers say [Scientific American]

. Pushing the existence of Earth's magnetic field back further into the planet's history helps fill in the picture of how life arose, the researchers argue, and it also has implications for those hunting extraterrestrial life. Life as we know it, they say, requires not only liquid water, but also the right magnetic field strength for that water to last over the long term, says Tarduno.

Mars may be dry today because it lost its magnetic field early on, he adds [Science News]

. There's a lot left to learn about the protective layer that makes our lives possible. For a separate study this week in Geophysical Research Letters, another team ran simulations of the activity in the Earth's core and concluded that they could predict a flip in the field's polarity—which has happened now and then during the planet's history—with no more warning than a few decades.

Some models suggest that a flip would be completed in a year or two, but if, as others predict, it lasted decades or longer we would be left exposed to space radiation. This could short-circuit satellites, pose a risk to aircraft passengers and play havoc with electrical equipment on the ground [New Scientist]