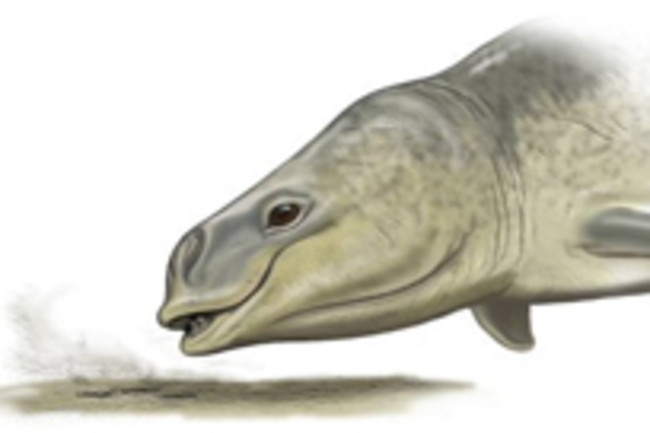 A fossil dwarf whale, first discovered in Australia over 70 years ago, had an unusual feeding habit. The whale sucked up mud pies in order to feast on sea bed critters, according to a new study. The fossil whale, thought to be between 25 and 28 million years old, hints that mud sucking might have been a precursor to the filter feeding used by today's baleen whales [National Geographic News

]. Modern filter feeders use what's called baleen—tiny hair-like structures—to filter their prey from the seawater. The most famous, and the largest, baleen species is the blue whale, and the ancient dwarf whale may be a distant relative, say the researchers.

Oddly, the dwarf whale also had teeth, which the researchers speculate were used to chomp on bulky prey that their tongue and facial muscles slurped off the sea floor. Modern whales with baleen plates eat tiny prey such as krill and are distinct from toothed whales, which include beaked whales and orcas (aka killer whales). The ancient whale, Mammalodon colliveri,

had a total body length of about 3m. But it appears to have been a bizarre evolutionary "splinter group" from the evolutionary lineage which later led to the 30m-long blue whale [BBC News]

Researchers say the dwarf whale most likely evolved from much larger ancestors and adds evidence to the theory that proto-baleen whales diversified into many experimental body forms, say the researchers, who published their work in the Zoological Journal of the Linnean Society.