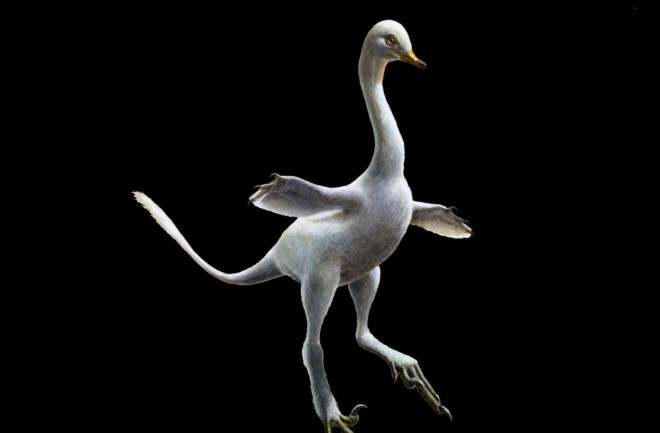 No, not an escapee from the Island of Dr. Moreau. It's Halszkaraptor escuilliei, a newly described dinosaur with an unusual combination of traits. (Credit Lukas Panzarin) If it looks like a duck...it may be a curious new dinosaur, Halszkaraptor escuilliei. The Mongolian maniraptor is a mouthful to say and a, uhm, glory to behold. But the most interesting thing about it is how it apparently lived. Fossiliferous Mongolia has given dinosaur enthusiasts a trove of discoveries over the years, from the hauls taken in during the escapades of Roy Chapman Andrews back in the day to more recent key finds, such as nearly complete skeletons of Deinocheirus mirificus, once known only from its enormous arms. But wait, there's more: the latest Mongolian dino to make the academic press is a doozy. H. escuilliei (I'll just call him Hal for short) was around roughly 73 million years ago and belongs to the maniraptors, the dinosaur lineage that includes birds and their closest relatives. But this guy had a number of features unique in the group. Swanosaurus Let's start with that neck. Yes, it's long, proportionally the longest neck-to-body ratio among the bird-ish dinosaurs. Hal apparently used that neck to go swanning about (heh), foraging and ambush hunting. And yes, there was definitely some hunting going on: The shape and number of teeth Hal had are similar to aquatic predators. The new dino also has unusual forelimbs: The long bones are flattened, suggesting a flipper-like appearance and function not unlike a penguin's upper limbs. By now you might be thinking waaaaaaait a minute...aquatic predators...penguins...cheap duck-themed puns...are you saying- Yes, I am saying that the researchers believe Hal was an amphibious dinosaur, able to walk on land on its hindlimbs and paddle about in water using its flipper-like forelimbs. This is pretty exciting stuff when you think that aquatic or amphibious dinosaurs are few and far between (Spinosaurus being the most famous). Not Ducking The Big Question If you're wondering where the duck comparison comes in, researchers found skeletal adaptations that suggest the long-necked dinosaur evolved with its center of mass shifted to the hip region. This allowed it to walk more erect on land than other bipedal dinosaurs; it's a feature also seen in ducks and other short-tailed birds. (As for the feathers...regular readers know how much I lovefeathered dinosaurswhen there is robust evidence to support their featheriness. And yes, based on what paleontologists have found in other maniraptors, it's a good bet Hal was rocking the fluffy stuff, as illustrated in the artist rendering.) A dinosaur this intriguing needs a great backstory for its name as well, and Hal has it. Its full name honors both the late Polish paleontologist Halszka Osmólska and François Escuillié, who was responsible for getting the specimen, which had been poached and is still partially embedded in rock, back to Mongolia. Read more about Hal today in Nature.