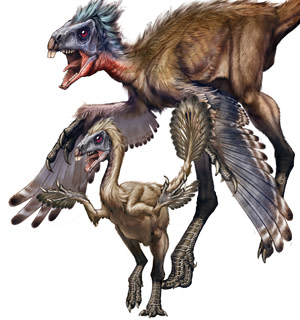 At the Chinese Academy of Sciences, Xing Xu is looking at two beautiful dinosaur fossils, both with clear feathers on their arms and tails. In the smaller specimen, the feathers are like thin ribbons at their base and quills at their tips (with vanes coming off a central shaft). The larger specimen is different – its arm and tail feathers are like quills across their entire length. With such different feather structures, you might assume that these animals belonged to different species, but you’d be wrong. They’re actually different life stages of the same animal – Similicaudipteryx. Both are youngsters, but the one with the quill-like feathers is an older version of the one with the ribbons. Together, they demonstrate that the feather of some dinosaurs changed dramatically as they grew older, in a way that we don’t see in any modern bird. By now, readers of this blog should be familiar with the idea of feathered dinosaurs (and, indeed, Xing Xu has discovered many of them). A spectacular series of fossils have revealed a wide range of plumes in a wide range of species, and we even know something about theircolour. But we still know very little about how these feathers developed as the animals matured, because fossils of young feathered dinosaurs are few and far between. So for Xu to find two, and two of the same species no less, is a real treat. Both hailed from Liaoning province of China (where else?), and based on their skulls, spines and hips, Xu has confidently classified them both as Similicaudipteryx, a small predator from the oviraptosaur group. Both animals are clearly youngsters. Although one is larger than the other, they’re both smaller than adult specimens of the same dinosaurs, and some of their bones haven’t fused completely yet. The younger animal (a-c below) has downy feathers over much of its back and hips. Elsewhere, it has larger pennaceous feathers (with a shaft and vanes) – 10 on each arm, and 11 much larger ones on its tail. All of these are ribbon-like at the base and quill-like at the tips. The more senior juvenile (d-f below) also had downy feathers on its head, back and hips but its pennaceous feathers are very different to its younger peer. Each arm has 10 primary feathers and 12 secondary ones, and the tail had at least 12 pairs. All of them are quill-like from base to tip and the arm feathers are just as long as the tail ones. 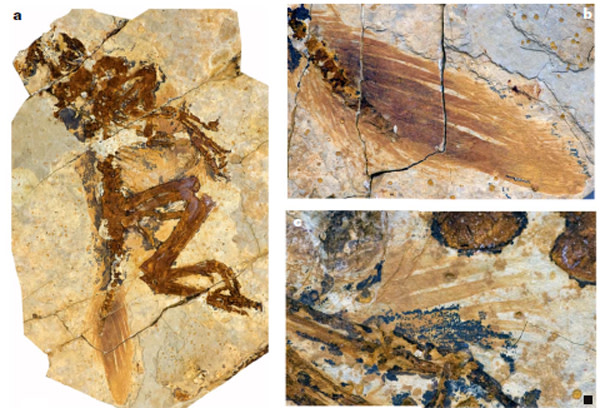 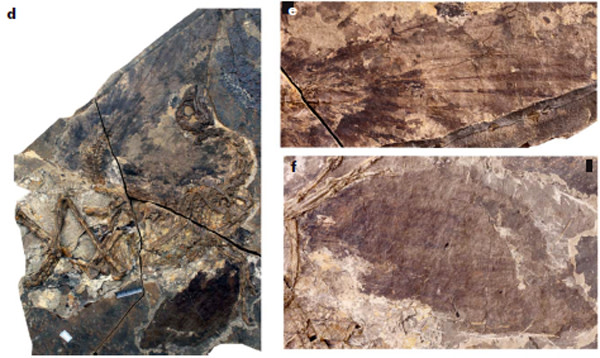 These differences suggest that Similicaudipterx’s feathers changed dramatically as it grew from hatchling to adult. The move from partial ribbons to complete quills is the most obvious one, especially since the arm and tail feathers of modern birds hardly change after they moult their initial downy birthday suits. It’s possible, but very unlikely, that the individual feathers changed; instead, Xu says that the animal probably moulted its feathers as it grew and replaced them with new ones of a different type. There were other changes too. If the younger animal really lacked secondary arm feathers (and it’s possible these just didn’t fossilise well), then Similicaudipteryx must have grown these as it matured. Modern birds have them from hatching. And the fact that the tail feathers outsized the arm ones in the younger individual but not the older one suggests that the feathers developed at different rates. Xu suggests that the arm feathers became more important as adulthood loomed. We can probably even guess the genetic events that lay behind these changes. In modern feathers, scientists are well aware of the genes that control the formation of the rachis (the central shaft) and the barbs (the branches that come off the rachis). If you switched off genes that promote the production of barbs, such as sonic hedgehog (don’t ask – developmental biologists make their own fun), you’d get a flat continuous ribbon on either side of the rachis. That’s probably what happened in the younger animal, resulting in a feather that’s half-ribbon and half-quill. These genes were then switched on more forcefully in the older juvenile and in adults. The half-ribbon feathers, formally known as “proximally ribbon-like pennaceous feathers” or PRPFs, are found in other dinosaurs, including primitive birds like the confuciusornithids. But they’re nowhere to be seen in modern birds. Because of this, Xu says that the development of the earliest feathers was probably much more varied and flexible than in today’s birds. It takes the discovery of rare and stunning specimens to reveal these programmes, which have since been lost in the course of evolution. Reference: Nature http://dx.doi.org/10.1038/nature08965More on feathered dinosaurs: