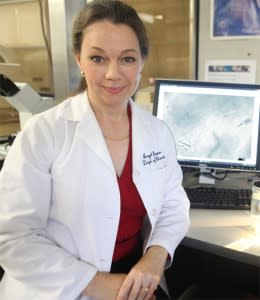 Nothing can turn a fun day at the beach into a nightmare faster than a jellyfish sting, as Angel Yanagihara, researcher at the University of Hawaii, learned firsthand when she was swimming off Kaimana beach in 1997. She had never heard of the nastiest group of jellyfish, the cubozoans (better known as box jellies), until she was badly stung. "I made it back to the beach in excruciating pain but then lost consciousness," she recounts. "I was bed ridden for days in great pain and none of the approaches I tried brought any relief." While the encounter was devastating, as a biochemist, Yanagihara was intrigued. She began scouring the scientific literature to find out what caused her traumatic ordeal, only to find out no one knew what was in box jelly venom. She has been studying the animals ever since

. When human flesh brushes up against a jellyfish tentacle, the tiny stinging cells jellies carry, called cnidocytes, can discharge their painful venom in as little as 700 nanoseconds. During the winter months, Australian waters are home to an abundance of the deadliest jellyfish in the world, the box jelly Chironex fleckeri, which has been known to kill a person in less than five minutes. 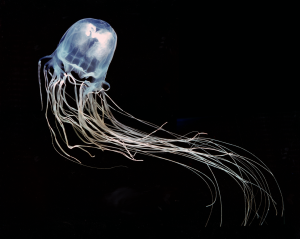 Chironex even looks scary, with a bell that can be large as a basketball and tentacles up to ten feet long carrying millions upon millions of stinging cells. But Chironex didn't earn its title as the deadliest jellyifish in the world based on looks. Anyone who has come in contact with Chironex knows its fearsome reputation is justified, as even mild stings are excruciating. Yet despite decades of research, exactly how Chironex and other jellies deal their sometimes-fatal blows has remained a fearsome mystery. "For over 60 years researchers have sought to understand the horrifying speed and potency of the venom of the Australian box jellyfish, arguably the most venomous animal in the world," explains Yanagihara. It's not that scientists have been unable to isolate any toxins. Yanagihara's initial work discovered pore-forming toxins called porins in a related species, Carybdea alata, capable of tearing holes in blood cells, and since scientists have found similar porins in every jellyfish species they've looked at. The conundrum is that severe sting victims don't suffer from profound destruction of red blood cells, seemingly counting out the porins as the cause of fatal stings. But if it's not the porins, what in jellyfish venom is to blame? How does it act so quickly, leading to such sudden cardiovascular collapse? And is there anything we can do to slow or stop its deadly activity? Now, in a new paper published today in PLOS ONE, Yanagihara and her colleagues from the University of Hawaii have revealed the key mechanism by which Chironex venom—and, specifically, the overlooked porins—quickly dismantle the cardiovascular system. Armed with physiology, the team was able to find a safe treatment that could be used to improve survival in sting victims. 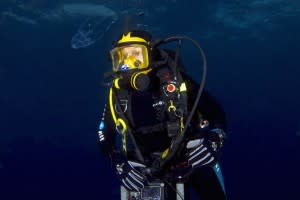 It's virtually impossible to find a good treatment for a toxin without first knowing what it is. So, the first step for Yanagihara was to isolate jellyfish venom and figure out if the porins were the real culprits. For species like snakes and spiders, this is a straightforward process, as they possess glands with large volumes of venom. But you can't just have a jelly bite a container or pull venom from a cnidocyte using a syringe; minuscule amounts of venom components are stored in microscopic compartments amongst a plethora of other body parts—deadly needles in haystacks of cellular debris. Yanagihara spent years troubleshooting and perfecting a new method of venom extraction to yield potent venom free of as much junk as possible. With this in hand, she was able develop assays to visualize how the venom acts both on red blood cells and in live animal models. 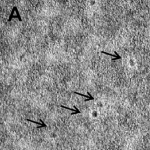 Yanagihara used electron microscopy to visualize the venom's affects on blood cells, and as suspected, found that venom porins create holes that lead to cell rupture. But as previous clinical research had shown, the cells bursting wasn't the real issue; Yanagihara found that instead, for several minutes before they break apart, red blood cells leaked potassium. Animal models confirmed that this sudden spike of potassium in the blood stream, termed hyperkalemia, is what leads to rapid changes in heart rate and function and, ultimately, the cardiovascular collapse that causes death by jellyfish. With the physiology of stings revealed, Yanagihara could finally start the laborious task of finding a way to stop the venom in its tracks. Jellies aren't the only animals that create porins. "The structural motif of the cubozoan porin reminded me of the bacterial porins," said Yanagihara. "I scoured that literature to look for inhibitors of the self assembly of those pore forming toxins and discovered studies from the 1940s even as far back as the 1890's citing zinc ion as useful in the inhibition of bacterial driven lytic reactions." Yanagihara tested over 100 compounds to see if they inhibited jellyfish venom, and found that one of the safest—zinc gluconate—worked well. Scientists aren't 100% sure how zinc compounds inhibit the porins, but they believe that the zinc disrupts the binding domains necessary for the proteins to assemble to form pores. In in vitro models, Yanagihara found that a low dose of zinc gluconate completely prevented the venom's blood cell busting effect. She then tested the compound in animal models, and found it worked better than the commercially available antivenom for box jelly stings, keeping the mice alive more than twice as long as the antivenom. 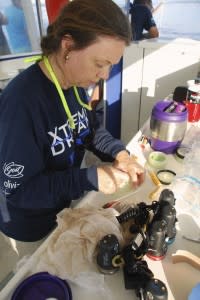 Yanagihara is now investigating how to turn the compound into a treatment for human stings. She has created a topical version, which was tested on extreme swimmer Diana Nyad when she attempted to swim a record-breaking 103 miles from Cuba to Florida. Nyad attempted the swim in 2011, but was stung so severely by box jellies on the first day in the water that she had to stop after 29 hours. This time, armed with Yanagihara's treatment, she swam three nights through dense jelly aggregations, and kept at the swim for a total of 51 hours covering over 60 miles of the trek before she gave in. Nyad reported that the treatment blunted the stings to her exposed lips and face enough to keep her going. Zinc gluconate isn't a cure-all; it won't stop all of the excruciating pain associated with severe stings, and victims are still at risk of going into shock and cardiovascular failure. But, Yanagihara is hopeful that treatment with zinc gluconate might be effective enough at prolonging survival in severe sting victims long enough to get them to medical professionals that can save their lives, and may provide welcome relief to mild sting victims. Currently, vinegar is used to treat jellyfish stings, though it only prevents unfired cnidocytes from contributing to the sting and doesn't act on the venom itself. Hot water can provide temporary relief, but Yanagihara is hopeful that zinc treatment will prove a more viable solution. In Australia and other areas of the Pacific where Chironex roams, such a solution is desperately needed. Despite being home to ten of the worlds deadliest snakes, since 1980, there have been more deaths due to jellies than snakebites in Australia, and it's estimated that 20-50 people die annually from box jelly stings in the Philippines. Worse, in recent years, scientists have reported that expanding ranges for many jellyfish species due to changing ocean currents, over-fishing of other species, and warmer ocean temperatures from climate change. The Nation Science Foundation estimates that jellies cost hundreds of millions or even billions of dollars

in medical damages, fisheries effects and tourism loss. This breakthrough treatment is more important than ever, and hopefully, will help relieve the thousands of stings worldwide every year. Citation: Yanagihara AA, Shohet RV (2012) Cubozoan Venom-Induced Cardiovascular Collapse Is Caused by Hyperkalemia and Prevented by Zinc Gluconate in Mice. PLoS ONE 7(12): e51368.