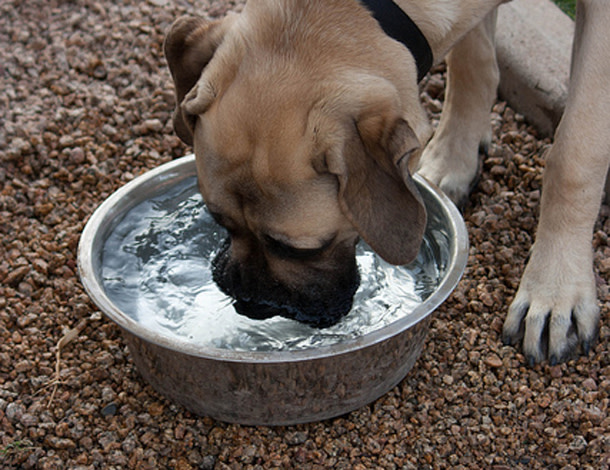 The competition between cats and dogs often takes amusing turns. Last year, cats seemed to edge ahead in the ‘drinking’ event. Until recently, people thought that both pets drink by using their tongues as simple ladles to lap up liquids. But Pedro Reis and Roman Stocker from MIT found that cats do something very different. Using high-speed video recordings, they showed cats drink by using their tongues to draw columns of water into their open jaws. While dogs supposedly drink by scooping up water in a mundane way, cats were portrayed as masters of physics that “defeat gravity” whenever they drink. Now, A. W. Crompton and Catherine Musinsky from Harvard University have stepped up to even the score for dogs. Through their own high-speed videos – including X-ray films of drinking dogs – they have found that dogs use the same technique the cats do. It’s a draw.

Here’s what I wrote about Reis and Stocker’s cat study last year (the full post, featuring an Oscar-winning film and YouTube, is worth a read too

Drinking is more of a challenge for cats than for us. They have to drink from flat, horizontal bodies of water. Even with our hands tied, we could do that just by putting out mouth at the surface and sucking, but then we have large cheeks that can form a proper seal. Pigs, sheep and horses have the same ability, but cats and dogs do not. Their cheeks don’t extend far enough forward so they have to use a different technique: lapping. Cat owners have watched their pets lap at water for thousands of years but when Stocker did so, his curiosity was piqued. “Three years ago, when I was watching my cat Cutta Cutta lap during breakfast, I realized there was an interesting biomechanics problem behind this simple action,” he says. The lapping motion is so fast that to fully appreciate it, you need a high-speed camera. Slow-motion films of Cutta Cutta revealed that a cat doesn’t actually scoop up its drink with its tongue in the way that a dog does. Its technique is more subtle. For a start, it drinks only using the very tip of its tongue. As it extends its tongue, it curls the tip upwards so that the bottom side rests on the surface of the liquid, without actually breaking it. The cat lifts its tongue, drawing a column of liquid with it. Just before the column collapses, the cat closes its mouth, captures the elevated liquid, and takes a refreshing drink. This sequence depends on a battle between two forces. The first is inertia, the tendency for the water column to keep moving in the same way until another force acts upon it. That force is gravity, which constantly threatens to pull the water column back into the bowl. With its rising tongue, a cat uses inertia to “defeat gravity” long enough to close its mouth on the almost-collapsing tower of liquid.

Crompton was “originally skeptical” about Reis and Stocker’s conclusion because he had studied lapping in the American opossum and found a completely different method. But he was particularly intrigued by the assertion that dogs also drink differently. They supposedly drink by curling their tongues towards their chin, and using the bottom surface as a spoon to scoop up liquid. But once the water is inside their mouths, how do they swallow? With their heads pointing downwards, they would need to move the water to the top of their tongues and push it back into their mouths against the pull of gravity – a difficult job for an animal without cheeks. Then there’s the fact that dogs and cats have fairly similar skulls and mouths – why should they drink in fundamentally different ways? To address their concerns, the duo shot a high-speed video of a drinking dog, at far greater resolution than the grainier video that Reis and Stocker had seen. The video showed that the dog did indeed scoop some water with the bottom of their tongues, but most of this falls off as the tongue retracts. If it’s acting as a spoon, it’s not a very good one. Thankfully, the tip of the tongue also draws up a column of water, and before this collapses, the dog closes its mouth around it. That’s exactly what cats do. 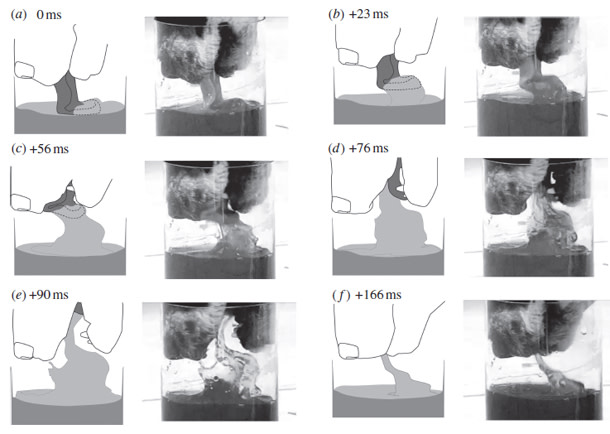 Crompton and Musinsky also filmed the dog with an X-ray camera to show what happens to the water inside the animal’s mouth. The tongue presses the water against the roof of the mouth, and keeps it there even as the tip of the tongue sticks out for another lap. As the tip draws up another column, the trapped water from the previous cycle is shoved backwards, and eventually swallowed. By filming cats, Crompton and Musinsky showed that they do the same thing. The tongues of both species do several things at the same time – they draw up a fresh lot of water, while pushing back older ones up into their throat. 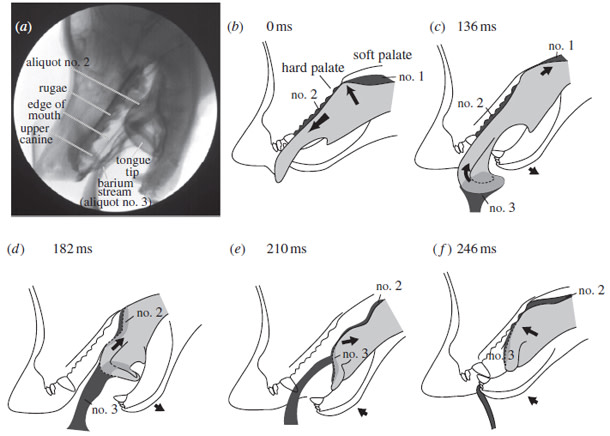 So cats and dogs drink in the same way. If anything, the difference is that cats are more elegant, and dogs messier. Drinking dogs stick their tongues more deeply into liquids than cats do, and when they retract, they spray more liquid about. Cats are tidier about it, so their technique is easier to see. Stocker says, “I'm delighted to see this research, not only because it adds a new element to the story of how animals drink, but also because it exemplifies how science progresses - by interactions and debate between different groups, even between MIT and Harvard. Masterfully done and bringing all pets on a par!” Reference: Crompton & Musinsky. 2011. How dogs lap: ingestion and intraoral transport in Canis familiaris. Biology Letters http://dx.doi.org/10.1098/rsbl.2011.0336