Dogs Attempt To Communicate With Us Through Facial Expressions 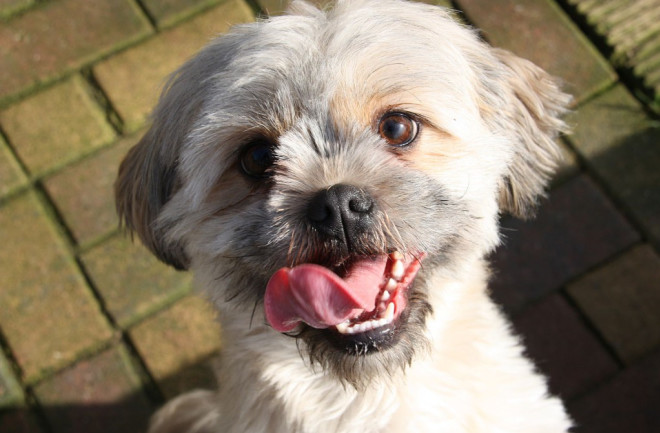 Is this dog soooo in love with you, asking for another treat, or just panting from the heat and slurping up its own drool? New research suggests dogs' facial expressions are an attempt at communicating with us. (Credit Lars Curfs/Wikimedia Commons) Hey dog owners, you're not imagining it: Researchers think your pooch may be trying to say something with a pout or pleading eyes. Everyone who lives with dogs may be rolling their eyes right about now and saying "Of course Boopsie/Rex/Potato is smiling/frowning/expressing wide-eyed existential dread," but heaps of anecdotal evidence don't mean much in terms of scientific cred. A study out today, however, is a big step toward confirming that dogs use facial expressions in an attempt to communicate with humans. Within our extended primate clan, particularly orangutans and gibbons, there is evidence that individuals modulate their facial expressions based on whether there's an audience, which suggests they're using the expressions as a form of communication. But there's been no evidence that's the case among non-primates — their facial expressions have generally been considered involuntary and reflexive displays of emotion. Interested in testing that notion, reasearchers from the University of Portsmouth designed an experiment to determine whether the facial expressions of dogs change in the presence of a human audience. The team recorded the faces of 24 pet dogs, ages 1-12 years, in four different scenarios: with or without food present, and with a human facing them or turned away. Analyzing video of the animals, the researchers found that food (or lack thereof) wasn't a factor in the dogs' reactions — but human attention was. Fido and friends produced significantly more distinct facial expressions when the human faced them. Food is considered an "arousing stimulus," so the fact that it didn't elicit any extra expressions from the pups bolsters the idea that, when the dogs did make faces (when they had the attention of a human), it was a voluntary action. The most common expressions by the dogs when faced with human attention were an inner eyebrow raise, which makes the dog's eyes appear larger and more puppy-ish, and showing some tongue — coincidentally, most dog behavior literature suggests that the "tongue out" expression indicates relaxed attentiveness, though it can also indicate stress when accompanied by panting. The team believes the findings suggest that dogs are sensitive to human attention and tailor their expressions accordingly in an active attempt to communicate, hinting at more flexible cognitive processes at work. The research, which is the first to test whether dogs modify their expressions in front of a human audience, appeared today in Scientific Reports.

Pretty sure my dog's facial expression translates as "I do not appreciate being dressed as a fully loaded baked potato."