Dogs and devils - the rise of the contagious cancers

I'm away for the weekend so I thought that I'd repost an article from the old Wordpress blog. This is actually the first ever article I wrote for Not Exactly Rocket Science and I've updated it slightly to take more recent findings into account. I'm considering doing these reposts every Saturday, but let me know whether you're keen on the idea.

Cancer cells are, for all intents and purposes, immortal. Having broken free of the rules and strictures that govern other cells, they are free to grow and divide as they please. In a short space of time, a lone cancer cell can form a mass of identical clones - a tumour. Often, these grow and spread quickly at the expense of their host who usually ends up dying, taking the tumour with it. But there is one way a cancer could escape this fate and carry on its selfish reproduction - by finding another host. It could become contagious. 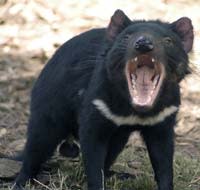 In humans, cancers are definitely not contagious. You can't catch cancer from someone who has it; at most, you can inherit a higher risk of developing cancer, because of faulty genes passed on from your parents. But we now know of two animal cancers that are exceptions to this rule - one has spread all over the world from a single individual and the other threatens to exterminate an entire species.

In 2006, Australian researchers Anne-Marie Pearse and Kate Swift found that a facial cancer plaguing the local Tasmanian devils was caused by contagious cancers. The condition, known as devil facial tumour disease, is spread when an infected devil bites another. The devils' boisterous temperaments and their propensity for squabbling over carcasses mean that such bites are common. Once infected, the animals develop grotesque tumours that stop them from feeding properly, and they usually die of starvation within six months. As a result, the cancer is decimating the already small population.

The second type of contagious cancer is far more widespread and affects far more familiar hosts - domestic dogs. The disease in question is called canine transmissible venereal tumour (CTVT), or Sticker's sarcoma and it's a case of a cancer cell evolving into a global parasite.

Going to the dogs

CTVT is transmitted through sex or close contact between infected dogs. It was first described 130 years ago by a German scientist called Novinski and its origins have been debated ever since. Some scientists suggested that it was caused by a virus, much like human papillomavirus (HPV) causes cervical cancer in humans today. But Robin Weiss and Claudio Murgia from University College London put these theories to rest in 2006 with a definitive study.

They and their colleagues analysed tumour samples from 40 dogs across five continents. Despite their disparate origins, all these samples shared identical and distinctive genetic markers that uninfected tissues from the same dogs did not. The explanation was clear - these cancers had not developed in the usual way from the cells of the host animals. The cancer cells themselves were spreading from dog to dog.

These rogue cells have become parasites in their own right, evolving from a single ancestor into a dynasty that has colonised the globe aboard canine vessels. How this process began is still a mystery, but Weiss's analysis provides some hints as to where and when.

The original cancer cell must have developed in either a wolf or an old Asian dog lineage, such as a Husky. It evolved anywhere between 200 and 2500 years ago and may well have been around for even longer. In fact, the CTVT cancer cell is very likely to be the oldest lineage of mammalian cells still in existence. The cells that Weiss is studying today are most probably direct clone descendants of the same cells that Novinski identified 130 years ago - genetically identical great-granddaughters of the original tumour.

To kill or not to kill

When that original cell gained independence, it became truly immortal, long outliving its original body and lasting for centuries. So far, we don't know of any human cancer cells that have pulled off a similar trick. But Weiss feels that if they did, the best place to look for them would be in people with weaker immune systems including transplant patients and those with HIV.

His group have found evidence that evading the host's immune defences is a key part of CTVT's strategy for finding another dog to infect. The cells accomplish this by switching off some key immune system players - a group of genes collectively called dog leukocyte antigens (DLAs). They also secrete a protein called TGF-β1 that strongly blocks any immune responses.

But slipping past immune sentries would do the cells no good if the host died before infecting another dog. Infection requires sex, which may not happen for some time. So CTVT is a merciful parasite. At the start of infection, it grows rapidly, but within 3-9 months, it regresses of its own accord. By never killing its carrier, the cells ensure that they can spread to as many new hosts as possible.

The Tasmanian devils are not so lucky. Their cancers are spread through biting, a more frequent event than sex, and as such, they can afford to be more aggressive. Last year, a team of scientists from the University of Sydney found evidence that the devils' tumours, like CTVT, are all descended from a single cancer that developed in one unlucky individual.

This founding tumour was able to spread to the rest of the population without using any specific tricks for evading the devils' immune system and indeed, it hardly needed them . During the last Ice Age, the devils went through a population bottleneck and their genetic diversity has never really recovered. Today, they have such low genetic diversity in key immune system genes that they are unable to recognise the cancer as foreign tissue and fail to mount any sort of defence against it.

The devils' aggressive behaviour, combined with this genetic bottleneck, could spell the end for both devils and cancer cells, unless conservation measures are properly carried out. For the moment, the best option appears to be separating the infected individuals from the rest of the population. It's definitely worthwhile checking out the Save the Tasmanian Devil website. It's really well designed, has tons of excellent information and contains tips on how you can help.