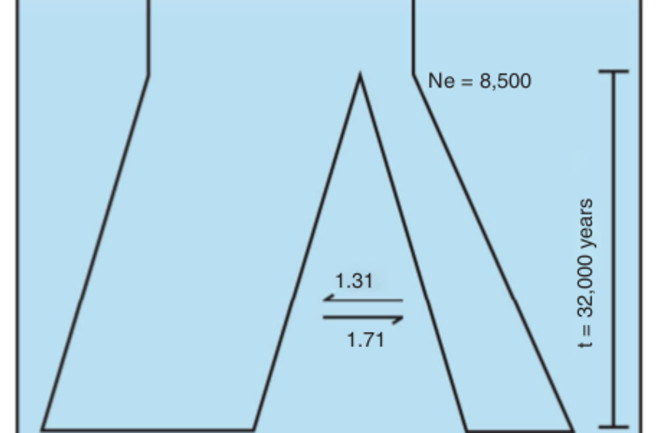 Cite: Wang, Guo-dong, et al. "The genomics of selection in dogs and the parallel evolution between dogs and humans." Nature Communications 4 (2013): 1860. To the left is a figure which illustrates the phylogenetic inferences from a new paper in Nature Communications, The genomics of selection in dogs and the parallel evolution between dogs and humans (see Carl Zimmer's coverage in The New York Times). Why is this paper important? The first thing that jumped out at me is that because they're using whole genomes (~10X coverage) of a selection of dogs and wolves the results aren't as subject to the bias of using "chips" of polymorphisms discovered in dogs on wolves (see: Genome-wide SNP and haplotype analyses reveal a rich history underlying dog domestication). The second aspect is that the coalescence of the dog vs. wolf lineage is pushed further back in time than earlier genetic work, by a factor of three. A standard model for the origin of dogs is that they arose in the Middle East ~10,000-15,000 years ago , possibly as part of the broad shift of lifestyles which culminated in the Neolithic Revolution. This model is now in serious question. Though there have always been claims of fossils of older domestic canids (adduced as such in terms of morphology) than the ones discovered in the Middle East ~15,000 years ago, this year there has been publication of ancient mtDNA results from ~30,000 years before the present which imply the separation of putative domestic and wolf lineages at least to that date. Over the past few years I havewonderedabout the specific nature of the emergence of both modern humans and modern dogs, and their co-evolutionary trajectory, over the Pleistocene and into the Holocene, in light of these results.

So the preponderance of data (genomic and archaeological) leans me toward accepting the general shape and >15,000 year B.P. date for the divergence of dog and wolf lineages outlined by the authors. But there is a lot more in terms of the phylogenetics of the paper which I am not willing to agree with as so obvious and clear. In particular, the authors support a Chinese/Southeast Asian origin for the dog, rather than a Middle Eastern one. This position is backed up by the reality that the Southeast Asian dog lineages do seem quite genetically diverse, and basal to other dogs (i.e., they diverge first within the clade of domestic dogs). Additionally, in the paper itself they note that the PCA, which visualizes genetic distance, suggests that the East Asian lineages are somewhat shifted toward the wolf. Model based clustering also implies that East Asian lineages are "more wolf." The reason I don't buy this conjecture is as they say in the paper itself modern distributions and relationships don't always map onto ancient distributions and relationships. We've already gotten into trouble doing this for human populations of similar time depth as the new putative period of dog domestication. Ancient DNA has uncovered a great deal of discordance between the past and present. I don't expect dogs to be any different. The authors have whole genomes of a dozen animals. When the data set is expanded to hundreds with reasonable geographic coverage let's talk. They attempt to model some gene flow, but I suspect that this is a major problem when talking about regions of origin of a group of organisms whose divergence from the ancestral outgroup is not quite clear in its nature.

Human directed breeding. Credit: Galabwebdesign. But, a bigger point which has less to do with the zone of origination of the dog is the mode of the origination "event." In the paper the authors present a stark model of the classic origination event for dogs, where Ice Age hunter-gatherers adopt some puppies, and this population exhibits a sharp and punctuated divergence from the main line of the wolves. These genetic data don't indicate that at all. Rather, the "bottleneck" as very mild, if you could call it a bottleneck (see: Vulcans through the eye of the bottleneck). Certainly some inbred modern lineages have gone through bottlenecks, but this was long subsequent to the initial separation of dog and wolf. Rather, the authors put forward an alternative hypothesis where dogs were co-existent with early man, with a subset of wolves who were happy to scavenge on the margins of human settlements. There are variations and flavors of this sort of argument, but you can bracket them as the "self domestication" model. The reality here is that I think our explicit differentiation between forms of selection is wrongheaded, the primary issue isn't whether dogs were self-domesticated or human-domesticated, but the rate of adaptation and demographic history. It may be that the best way to think about the origin of dogs and humans isn't that the latter domesticated the former, but that both dogs and humans changed together as their lifestyles and interactions changed. With the rise of agriculture and increased specialization of human lifestyles there occurred a concomitant diversification of dogs. And that is where I think the second part of the paper, focusing on parallel adaptations on the genomic level, is really interesting.

If you don't want to click the image above, it seems that genes involved in neurological function, metabolism, and cancer are enriched in terms of signals of selection in domestic dogs. This is not surprising. Dogs exhibit great life history differences from wolves (they breed more, and are not pair bonded), and famously may be able to read human faces despite being less intelligent than wolves. And of course dogs have to eat what we eat, at least to some extent. To understand this functional aspect of the evolutionary history of dogs though one does have to nail the phylogenetics down. So there will no doubt be more coming down the pipeline in this domain, and within the next few years the natural history of man's best friend will be of deep interest. As ancient DNA has revolutionized the understanding of the human past, I suspect there will be attempts to analyze samples from dogs as well (though I assume that the data sets will always be thinner because scholars have always been preoccupied with human remains). Citation: Wang, Guo-dong, et al. "The genomics of selection in dogs and the parallel evolution between dogs and humans." Nature Communications 4 (2013): 1860.