Does Infinity in the Sky Mean Limitless Energy? 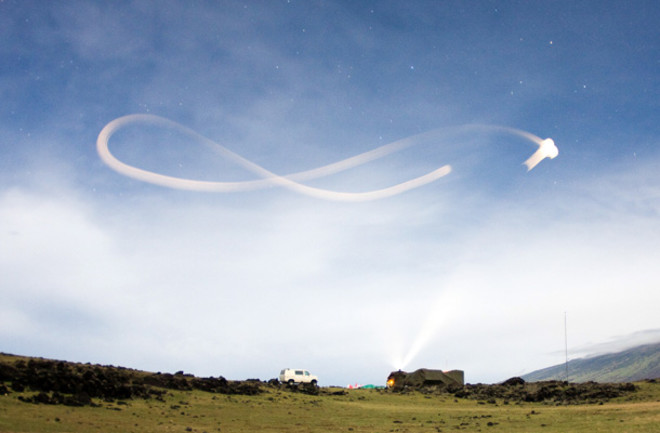 I got pretty excited when Makani Power staff photographer Andrea Dunlap showed me this photograph. For my purposes, it doesn't get much better than this: sustainable energy, technology, the future, all rolled into a beautiful photograph. Pick up our June issue for a gander at the double-page spread. This photograph is 30-second exposure taken during a test of a 10-kilowatt-scale prototype of an airborne wind turbine in Maui, Hawaii. The mobile turbine has a span of about 16 feet and is tethered to the ground using a long, flexible cable. A computer controls the flight pattern. These tests show that a flying generator can sweep through a bigger wind window than a traditional turbine, and without the massive supporting towers. Makani Power plans to have a functional megawatt version of the tethered turbine ready by 2011. Makani Power is partially funded by Google.org as a potential source of renewable energy. Google's server farms and the Internet in general have ever increasing demands for power, which is in turn burning ever more coal. Photograph courtesy Makani Power