Does an Arched Foot Bone Prove That Lucy Loved to Walk? 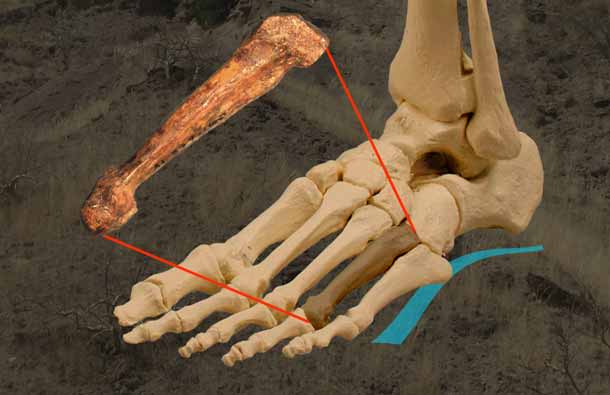 Lucy loved the land, new research suggests. A study in this week's edition of the journal Science puts forth a foot bone from the early hominid Australopithecus afarensis (Lucy's kind) as evidence that this species was built for walking—meaning human ancestors could have been striding around on ground level for most of their lives by 3.2 million years ago.

Scientists already knew that A. afarensis could walk on two feet but were unsure whether the creatures climbed and grasped tree branches as well, much like their own ancestor species and modern nonhuman apes. The fourth metatarsal ... shows that A. afarensis moved around more like modern humans. "Now that we know Lucy and her relatives had arches in their feet, this affects much of what we know about them, from where they lived to what they ate and how they avoided predators," said Carol Ward. [The Guardian]

The bone in question comes from Ethiopia, home to many significant hominid finds. And though it is just a small sample, that arched shape in the foot bone suggests Australopithecus had rigid feet, and may not have been much better at climbing trees than you or I.

Arches were an important part of our evolution into humans, because they make climbing trees much harder. The arches on the inside of the foot, nearer to the big toe, serve as a shock absorber when we plant our feet back on the ground. All other living primates have feet made for grasping and bending to hang onto tree branches and their young, more like our hands than our feet. [LiveScience]

For some anthropologists, the metatarsal finally seals the deal on Australopithecus' status as a land-lover. Last year researchers announced the finding

of an Australopithecus individual much larger than Lucy, and dating back 3.6 million years. They dubbed him Big Man. The shape of his legs, chest, and back suggested upright walking to his discoverers.

“There were far too many highly detailed adaptations in every part of the A. afarensis skeleton for upright walking and exclusive ground travel not to have emerged,” remarks anthropologist Owen Lovejoy of Kent State University in Ohio, who studied Big Man’s remains. [Science News]

Plenty of anthropologists didn't believe that Big Man clinched the case on Australopithecus's love of walking, however, and the new find hasn't convinced everyone either. Chris Stringer of the London Natural History Museum, for example, points out that some of the species's upper-body parts seem adapted to climbing, such as their curved arm bones.

"If you are on the ground all the time, you need to find shelter at night and you are in a position to move out into open countryside, which has implications for new resources -- scavenging and meat-eating, for example. "If the Australopithecines [the broader family of Australopithecus] were on that road, they were only at the very, very beginning of it." [BBC News]

80beats: Scientist Smackdown: Are Bone Scratches Evidence of Tool Use by Human Ancestors?

80beats: Lucy’s New Relative, “Big Man,” May Push Back the Origin of Walking