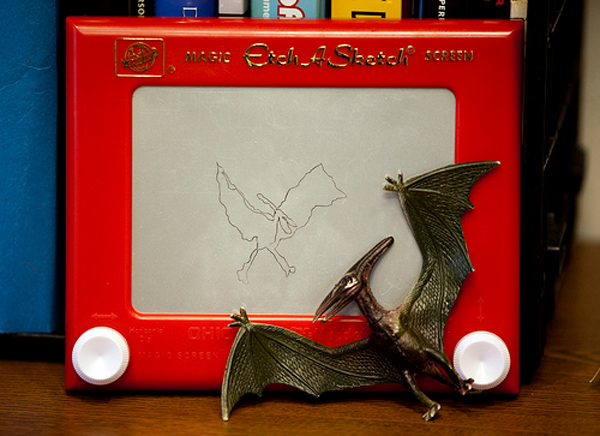 You can’t go for a month without seeing a claim that some newdiscoveryhasrewrittenevolutionaryhistory. If headlines are to be believed, phylogeny – the business of drawing family trees between different species – is an etch-a-sketch science. No sooner are family trees drawn before they’re rearranged. It’s easy to rile against these seemingly sensationalist claims, but James Tarver from the University of Bristol has found that the reality is more complex. Tarver focused on two popular groups of animals – dinosaurs and catarrhines, a group of primates that includes humans, apes and all monkeys from Asia and Africa. Together with Phil Donoghue and Mike Benton, Tarver looked at how the evolutionary trees for these two groups have changed over the last 200 years. They found that the catarrhine tree is far more stable than that of the dinosaurs. For the latter group, claims about new fossils that rewrite evolutionary history (while still arguably hyperbolic) have the ring of truth about them. For catarrhines, Tarver created a tree using all the species that had been discovered by 2007, including 154 living and 131 fossil ones. He then went back in time to 1760; every ten years, he pruned away species that hadn’t been discovered yet. The goal wasn’t to redraw the tree at each juncture, but to look at how the data had matured over time. Over the years, Tarver worked out how complete the fossil record has been, whether new discoveries cropped up throughout the tree or clustered in specific branches, and whether the tree’s overall shape has shifted or stayed the same. He found that for catarrhines, claims about evolutionary histories being rewritten are indeed overblown. The shape of the tree that links these animals has been remarkably stable over time, especially within the last century. Scientists had identified most of the key groups early on and when they discovered new species, they tended to uncover hidden twigs on the tree, rather than rearrange entire branches. But it’s a different story for dinosaurs. As with catarrhines, Tarver took a modern tree and slowly pruned it away in ten-year gaps until 1840. Even though new species are constantly being discovered, the field is apparently “in a state of turmoil”. Our knowledge of dinosaurs is still patchy and new species might hail from entirely unknown lineages. Certain parts of the world are still underrepresented in the fossil record. And while some groups like the flesh-eating theropods have been fairly stable, but others like the giant sauropods are in a state of flux. Tarver concluded that for these ancient reptiles, new discoveries do indeed have the potential to rewrite evolutionary history.

But the difference between theropods and sauropods points to a weakness in Tarver’s analysis: it hinges on a fairly arbitrary choice of groups. By focusing on catarrhines, he narrowed his analysis to a limited group of animals, and one far smaller than the dinosaurs. A less stable picture might have emerged if he had included other primates like New World monkeys or tarsiers. In the same way that theropods were a sea of stability among dinosaurs, perhaps catarrhines are merely a sea of stability among primates as a whole. And even in this group, There are also important differences between the two groups. Dinosaurs include far more species than catarrhines, and they attract the efforts of far more palaeontologists. Catarrhines have living members representing all corners of the family tree; dinosaurs also have living representatives – birds – but they are a single isolated branch of a mostly extinct tree. Brian Switek, who writes the Laelaps blog, says, “We used living catarrhines to identify particular [lineages], and used this is a template for what to expect from the fossil record. We have no such template for dinosaurs, and so a new fossil can potentially reveal an entirely new [subgroup].” Switek adds, “The study does not appear to take into account that old discoveries are constantly being reassessed and these studies do sometimes change the shape of the evolutionary tree. W.E. le Gros Clark's mid-20th century reassessment of the australopithcines moved them out from the "ape" group and into the "human" group, while better material from Ramapithecus showed that it was not as closely related to us as was believed and therefore was booted from the hominin lineage. Focusing on new discoveries alone provides only a narrow view of our changing views of evolutionary trees.” New discoveries also have the potential to shake things up, even among the stable catarrhines, as this year’s discovery of Saadanius demonstrated. Tarver is aware of these limitations. He writes, “While this confirms media claims that discoveries of new species have substantially altered our perception of the evolutionary history of dinosaurs, this is just as likely to be rejected in light of future discoveries.” To him, the real message of the study is that researchers should try to assess how mature and stable their data are before making bold claims about the evolutionary history of any particular group. “This may provide fewer headlines, but knowledge of evolutionary history that stands the test of time.” Reference: Proc Roy Soc B http://dx.doi.org/10.1098/rspb.2010.0663Photo by Dean Terry, Mila Zinkova and Wilfried Berns

More on fossils that have shaken things up:

And one that really didn’t:

Planet EarthDating When Dinosaurs Lived is Difficult. This Paleontologist Has Made it Her Mission