For tens of thousands of years, humans have created sculptures by carving pieces from a solid block. They have chipped away at stone, metal, wood and ceramics, creating art by subtracting material. Now, a group of scientists from Harvard University have figured out how to do the same thing with DNA. First, Yonggang Ke builds a solid block of DNA from individual Lego-like bricks. Each one is a single strand of the famous double helix that folds into a U-shape, designed to interlock with four neighbours. You can see what happens in the diagram below, which visualises the strands as two-hole Lego bricks. Together, hundreds of them can anneal into a solid block. And because each brick has a unique sequences, it only sticks to certain neighbours, and occupies a set position in the block.

This means that Ke can create different shapes by leaving out specific bricks from the full set, like a sculptor removing bits of stone from a block. Starting with a thousand-brick block, he carved out 102 different shapes, with complex features like cavities, tunnels, and embossed symbols. Each one is just 25 nanometres wide in any direction, roughly the size of the smallest viruses. Ke’s work, led by Harvard’s Peng Yin, is the latest achievement from the growing field of DNA origami. It’s forefather was the chemist Ned Seeman, who created a DNA cube in 1991 by annealing separate strands together. He followed this with a simple tubes and lattices, but his technique was laborious and inefficient. Paul Rothemund greatly improved it in 2006. He showed that you can fold a long 7,000-letter strand of viral DNA into a specific shape by using hundreds of shorter snippets. These match different part of the virus’s genome and ‘staple’ it into place. Mix the strands together—the long scaffold and short staples—and they spontaneously fold into the right shape. Rothemund and others used the origami technique to create miniature maps, smiley faces, the word 'NED' (in honour of Seeman), and more elaborate shapes like boxes. Last year, Yin’s team broke off from the scaffold-and-staples tradition. I wrote about their work for Nature News:

Bryan Wei... and his colleagues make shapes out of single strands of DNA just 42 letters long. Each strand is unique, and folds to form a rectangular tile. When mixed, neighbouring tiles stick to each other in a brick-wall pattern, and shorter boundary tiles lock the edges in place. In their simplest configuration, the tiles produce a solid 64-by-103-nanometre rectangle, but Wei and his team can create more complex shapes by leaving out specific tiles. Using this strategy, they created 107 two-dimensional shapes, including letters, numbers, Chinese characters, geometric shapes and symbols. They also produced tubes and rectangles of different sizes, including one consisting of more than 1,000 tiles. The team designed a robot to pick the tiles. The desired shape is drawn using a graphical interface, and the robot picks out and mixes the required strands. It can produce 48 shapes in as many hours. Millions of shapes can be crafted from the same set of tiles simply by leaving some out. “Once you have a pre-synthesized library, you don’t need any new DNA designs,” says Yin. “You just pick your molecules.”

The latest DNA bricks are a logical extension of these simple tiles, taking the same principles from two dimensions into three. They keep the simplicity of the tiles, and they’re even smaller (32 letters long, rather than 42) so they should assemble with greater precision. As before, the team designs shapes on a program called CanDo that selects which bricks to include, and a robot mixes them together. With the same set of bricks, they produced over a hundred shapes. And as before, the bricks do not need to be mixed in exacting ratios, as scientists had previously assumed. By getting the ratios in the right ballpark and mixing them together, their complicated sculptures assembled themselves with reasonable efficiency. Typically, between 5 to 30 percent of the strands ended up in a finished product, depending on how complicated or big the shape was—a decent proportion compared to earlier attempts at flatter DNA origami. 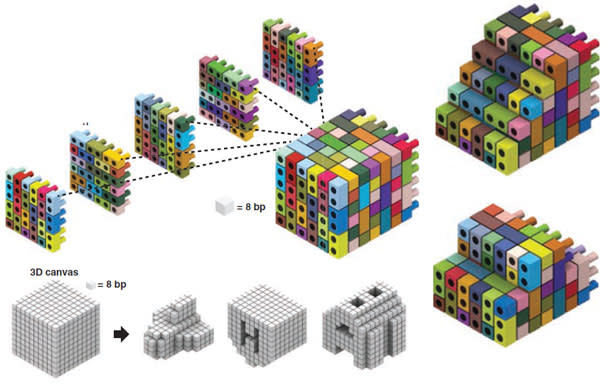 The technique is very versatile. For example, the bricks can be altered so they stack in hexagonal or honeycomb lattices, rather than cubic bricks. The team are now trying to find the best possible conditions for assembling their bricks into even larger and more complicated structures, with as little waste as possible. “We are working on making structures 10 to 100 times as big as a typical DNA origami and have seen some promising preliminary results,” says Ke. To what end? DNA origami—and this new form of DNA sculpture—are still tools in search of applications, but people in the field are already working on several possibilities. The shapes could be used a containers or vehicles for medical drugs. They could be used as rulers to measure nano-scale distances, since DNA produces structures of a predictable and constant size. They can be used to position other molecules in orderly sheets or grids—imagine proteins that manufacture specific chemicals from their raw ingredients, aligned as a neat production line in a DNA-sculpted factory. Reference: Ke, Ong, Shih & Yin. 2012. Three-Dimensional Structures Self-Assembled from DNA Bricks. Science http://dx.doi.org/10.1126/science.1227268