DNA from the largest bird ever sequenced from fossil eggshells 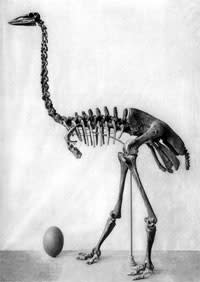 Even extinction and the passing of millennia are no barriers to clever geneticists. In the past few years, scientists have managed to sequence the complete genome of a prehistoric human and produced "first drafts" of the mammoth and Neanderthal genomes. More controversially, some groups have even recovered DNA from dinosaurs. Now, a variety of extinct birds join the ancient DNA club including the largest that ever lived - Aepyornis, the elephant bird.

In a first for palaeontology, Charlotte Oskam from Murdoch University, Perth, extracted DNA from 18 fossil eggshells, either directly excavated or taken from museum collections. Some came from long-deceased members of living species including the emu, an owl and a duck. Others belonged to extinct species including Madagascar's 3-metre tall elephant bird and the giants moas of New Zealand. A few of these specimens are just a few centuries old, but the oldest came from an emu that lived 19,000 years ago.

It turns out that bird eggshells are an excellent source of ancient DNA. They're made of a protein matrix that is loaded with DNA and surrounded by crystals of calcium carbonate. The structure shelters the DNA and acts as a barrier to oxygen and water, two of the major contributors to DNA damage. Eggshells also stop microbes from growing and it seems that ancient ones still do the same. Oskam found that the fossil shells had around 125 times less bacterial DNA than bones of the same species did.

This is important - bacteria are a major problem for attempts to extract ancient DNA and they force scientists to search for uncontaminated sources, like frozen hair. Eggshells, it seems, provide similarly bacteria-free samples. Still, Oskam's team took every precaution to prevent contamination. They used clean rooms and many control samples. Many of their sequences, like those of Aepyornis, were checked by two independent laboratories.

The Aepyornis sequences are particularly encouraging because many scientists have previously tried to extract DNA from the bones of this giant and failed. Eggshells seem like a more promising source and it certainly helps that the eggs of many of these giant species were massive and thick. But Oskam did also recover DNA from a fossil duck egg, which suggests that it should be possible to sequence the genes of even small extinct birds, like the dodo.

So far, the team have proved that they can extract the DNA. It's what they do with it that counts. It's worth remembering that fossil eggshells have already helped palaeontologists to date the remains of ancient birds, and reconstruct their diets and lifestyles. Some even clue us into the artistic traditions of our own ancestors.

Oskam is now analysing around 400 pieces from sites around New Zealand to understand how humans interacted with the moas and how our zealous hunting drove them to extinction. There were several different species of moa that are difficult to tell apart - egg DNA could help Oskam to do just that. The same technique could be used to study the last days of other extinct birds with interesting evolutionary histories, including the great auk, Haast's eagle and that poster child for extinction, the dodo.

Mike Bunce, who led the study, is keen to try and release ancient DNA from eggshells all around the world. "Given frozen environments preserve DNA 'better', we are very keen to examine any eggshell finds from 'old' sediments, such as seabird nesting sites, in the Arctic and Antarctic," he says. And the door should now be open for other researchers to do the same. After all, in finding out how to extract DNA from eggshells, Oskam tested a variety of methods to develop the most efficient possible protocol.

Still, it's clear that the technique has limitations. Oskam tried to extract DNA from the 50,000-year-old shell of Genyornis, a giant Australian bird that lived in a very hot climate. She failed. And as Bunce clearly stresses, "This is not a technique that is applicable to fossil dinosaur eggs."

Update: That hasn't stopped the idiotic headline writers to London's Metro newspaper from claiming that "Jurassic Park has just taken a giant T-Rex-sized step toward becoming reality after ancient DNA from long-extinct creatures was successfully extracted." Amusingly, the claim that dinsoaur DNA has been rebuilt is technically true given that birds are living dinosaurs. And if the subeditor who wrote the headline and standfirst and chose the picture actually knew that, I'd be surprised. 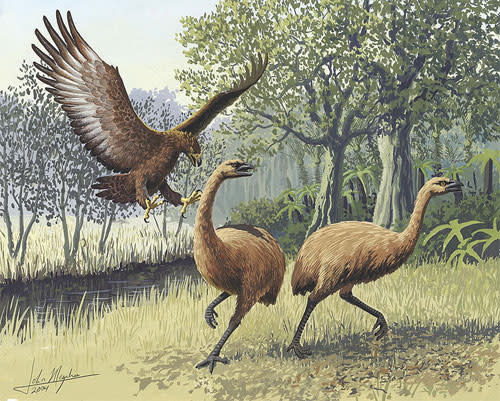